Much of President-elect’s Donald Trump’s policy preferences remain opaque and can only be inferred from vague campaign statements.

While specifics are forthcoming, a number of organizations are already gearing up to do battle on a host of issues, including climate change.

And if the early sign are any indication it looks like they may have more public support than ever. Comedian John Oliver, email campaigns and Google searches have helped drive a surge in donations, volunteers and social media follows in the week after the election.

“This is about people who are very concerned and are expressing their concern and eagerness to stand up in favor of sound environmental policies, in particular on climate change,” Sam Parry, the membership director at Environmental Defense Fund, said. “They're choosing this as their means of support.”

Parry said cash donations online in the week after the election were twice as high as they were compared to the same week last year. Much of it came through Google, indicating that it was organic searches for climate and other environmental causes and not a targeted fundraising campaign driving the swell in donations.

Other organizations have reported similar gains. Trey Pollard, the national press secretary at the Sierra Club, said they’ve seen 9,000 new monthly donors since election day, which is more than they had over the entire year-to-date.

Their Facebook likes also rose by more than 500 percent compared to the week before. The value of having a large following and mobilizing them with fact-based information is greater than ever as Facebook grapples with how to deal with the rise of fake news on the site.

Other organizations are also seeing an uptick in activity of people wanting to get involved. Citizens’ Climate Lobby, which has hundreds of local chapters around the U.S. aimed at building grassroots support for climate policy, had 70 people on their weekly introductory call rallying supporters to take coordinated actions, more than three times the norm according to Steve Valk, the group’s director of communications.

Greenpeace, which focuses on civil society taking actions to influence the political process, has also seen increasing interest in their work after the election.

“Greenpeace has seen a surge of support from people wanting to do anything they can to help,” spokesperson Cassady Craighill said. “That support has come in the form of donations, but also people wanting to volunteer and sign up for trainings in organizing and nonviolent direct action.”

How the money, volunteers and social media influence are used remains to be seen. That’s in large part because while Trump has said he would like to revoke Obama’s domestic and international climate policy, he has provided no specifics for how he would accomplish those things. Ditto for his plans on sparking a fossil fuel revolution and other ideas that could actively harm the climate. 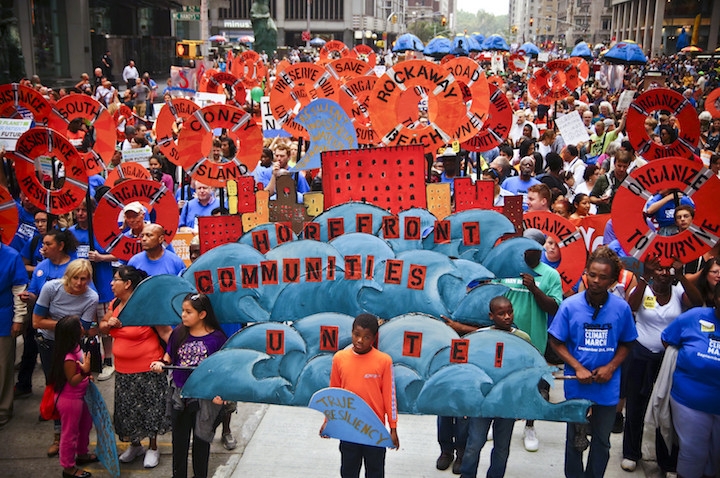 Protesters at the People's Climate March in New York on Sept. 22, 2014. Engaging civil society on climate issues is likely to be a top priority for some environmental groups following Donald Trump's election.
Credit: Joe Brusky/flickr

There are plenty of potential climate battles looming. The Clean Power Plan, Obama’s signature domestic climate achievement, is facing a court challenge that could stretch for years. And Republicans in Congress have long sought to curtail regulations on fossil fuel extraction on public lands as well as limiting the power of the Environmental Protection agency to address carbon pollution. If any of those changes occur, it would likely cause an increase greenhouse gas emissions and with them, more severe climate change.

As it is, climate change is already exacting a toll on the planet from increasing coastal floods to more intense extreme rain events to a rising risk of conflict. Oh, and 2016 will be the hottest year on record making it the third consecutive year that’s happened and ensuring that 16 of the 17 hottest years on record have all occurred in the 21st century (the only outlier is 1998 so not that far off).

“Trump’s election does not change the fact that the impacts of climate change have arrived and will only get worse if we do not act,” Craighill said. “A Trump administration just made an uphill battle that much steeper, and the world needs all the help it can get to overcome this obstacle.”

In short, there’s no shortages of ways for environmental groups to address what’s likely to be an assault on the climate action in the coming months and years.

You May Also Like:
Second-Warmest October Cements Hottest Year
The Agonizing Wait For Trump to Speak on Climate Policy
2016 Will Be Hottest Year, UN Climate Meeting Told