In 2008, floods in Thailand forced the temporary closure of four Nike factories, costing the company millions of dollars. In 2012, Hurricane Sandy demolished Verizon’s copper-wire infrastructure on the U.S. eastern seaboard, costing thousands of Verizon customers service and the company $1 billion in repair costs. 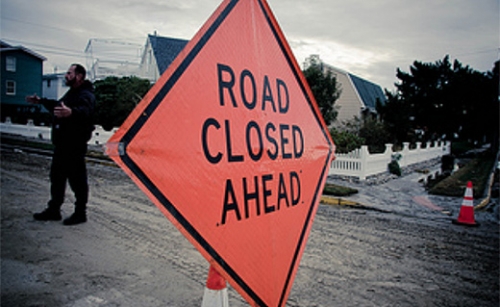 Extreme weather events like Hurricane Sandy comprise just one category of the climate-change-driven risks that companies and governments are beginning to plan for.
Credit: Scott Brandon Peterson/Flickr

Extreme weather events like these comprise just one category of the climate-change-driven risks that companies and governments are beginning to plan for. Others include water scarcity, sea-level rise, fuel shortages and shifting migratory patterns. To help companies and governments gauge which of these risks are most relevant to them, and figure out what they can do about it, a new breed of experts — climate adaptation specialists — is beginning to emerge.

In recent years, Nike has been developing adaptation strategies for its Southeast Asian factories. It also has focused on locating factories in less climate-insecure areas.

“Our customers … expect us to provide reliable service 24 hours a day, 365 days a year.” — Jim Gowen

Meanwhile, since 2012 Verizon has been replacing landlines with wireless or fiber optic options, both of which are more resilient in bad weather. The company started with the East Coast of the U.S. and is making the shift throughout the country, as are other big telecommunications companies. AT&T’s head of regulatory affairs, Bob Quinn, explained the death of landlines on CNN recently, noting that the companies that once made the parts necessary to maintain landlines have closed up shop, meaning that when extreme weather hits, companies are scrambling to find the parts they need for landline repairs on eBay or via other secondary markets.

Jim Gowen, Verizon’s chief sustainability officer, is the climate adaptation specialist leading the company’s efforts to steel itself for the impacts of a warming climate. “Our customers’ expectations are increasing dramatically, and they expect us to provide reliable service 24 hours a day, 365 days a year,” he told a Business for Social Responsibility, or BSR, working group focused on climate adaptation in 2011. “To meet those demands, we need to be able to withstand increasing weather risk. As a result, we’ve built redundancy into our networks, so that if there’s a challenge in one area, we can instantly reroute traffic on our networks and people can still communicate.”

Nike and Verizon are just two companies that have taken a bad experience with extreme weather and turned it into an opportunity to better understand and plan for climate-related risk. According to Ryan Schuchard, associate director of climate change for BSR, an increasing number of companies around the world are now tackling climate adaptation in a meaningful way.

Companies are beginning to look not just at measuring their carbon footprints and reducing greenhouse gas emissions, but at reducing their reliance on materials and systems threatened by climate change.

“HP, Levi’s, The Gap, Starbucks, Green Mountain Coffee — they’ve all got big efforts underway, and then Swiss RE and the insurance industry in general is really focused on this,” he says. “Oil and gas companies are paradoxically interested in looking at these issues as well, and utilities definitely are as well, especially with respect to water.”

Climate adaptation experts at Levi’s, for example, are looking at ways to survive impending water shortages, such as using dyes that don’t pollute waterways and textiles that need fewer washes. Oil and gas companies are taking a hard look at fuel shortages and how they will protect their existing infrastructure and find new ways to provide energy in the future. Coffee producers like Starbucks and Green Mountain are exploring integrated pest management and sustainable water management. In all cases, these companies are beginning to look not just at measuring their carbon footprints and reducing greenhouse gas emissions, but at reducing their reliance on materials and systems threatened by climate change.

The first step in any climate adaptation project, whether for the private or public sector, is to conduct a vulnerability assessment to determine which climate-related changes might most affect the company or region, according to Nora Ferm, senior associate at Cascadia Consulting and leader of the firm’s three-year-old climate adaptation practice. 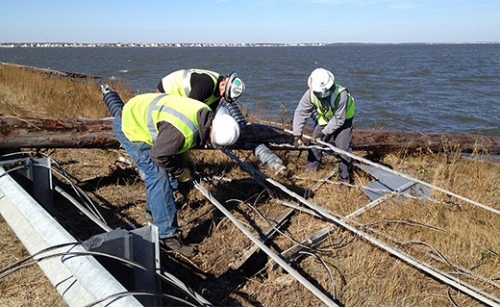 Companies are increasingly looking to reduce their reliance on materials and systems threatened by climate change.
Credit: Western Area Power/Flickr

“It starts with a review of the information out there and how it’s relevant to the client,” she says. “Then there will often be a stakeholder-engagement process to identify adaptation options, evaluate and prioritize them, and put together a plan. Not many people have actually gotten to the implementation phase yet, but generally when they do they’re likely to need consultants who specialize in engineering or communication.”

Climate adaptation consultants also empower clients to evaluate risks and formulate adaptation plans on their own in the future. A Cascadia project with the city of Seattle, for example, resulted in the creation of a tool the city used to evaluate all infrastructure projects. Cascadia then took that tool to Vietnam, where a coastal city used it to create a land use plan.

“You don’t want to set something up where every time they have a project they need to hire a consultant to tell them where climate change fits in,” Ferm says. “Ideally, you want solutions and tools that can stand on their own once the project is completed.”

While risk-assessment and planning tools are useful, one of the most important services climate adaptation consultants provide is translating climate science into clear, relevant information for business leaders and public officials.

“It’s pretty challenging to be able to fill that liaison role between scientists and decision makers,” Ferm says. “It’s easy to say but not easy to do in practice. I think it takes special skills and a real understanding of both sides of that equation to play that role.”

Prospective adaptation consultants should have a good understanding of climate science, know where to find the right information, and have good facilitation and communication skills, too.

The ability to bridge science and policy is just one of many skills Ferm says are required for those hoping to enter the booming climate adaptation industry. Prospective adaptation consultants should have a good understanding of climate science, know where to find the right information, and have good facilitation and communication skills, too.

“Part of that involves listening really well, understanding what sorts of decisions people are making already, and on what time frame, so we can help them understand how climate change factors into those decisions,” she says. “The idea is to integrate climate change into ongoing processes rather than treat it as a stand-alone that feels daunting or time-consuming or just gets forgotten. If we can develop systems that include it, that’s more likely to get traction.”

BSR’s Schuchard adds that many of the adaptation jobs of the future may not be called adaptation. “There are a lot of different ways to get involved in this,” he says. “There are jobs in engineering, finance, business continuity, management technology, sustainability, international development and policy that all incorporate climate adaptation. And then there are start-ups looking at products and technologies in this realm, too.”

Ultimately, Schuchard says, the best climate adaptation consultants are those who can think systematically about the problem, “integrating multiple disciplines and using a traditional management framework — finance, operations, and so forth — to make sense of these issues.”