The Clean Power Plan, the U.S. Environmental Protection Agency's proposal to slash carbon emissions from existing power plants across the country, has been hailed as a major step in public policy on climate change, but it’s also shining light on how uneven the decline in those emissions have been across the U.S. in recent years.

Though they have been trending downward nationwide, CO2 emissions from across the energy and electric power sectors have been intermittently rising and falling since 2005, the benchmark year for CO2 emissions cuts from fossil fuel-fired power plants under the EPA’s proposed plan, which was announced last week. 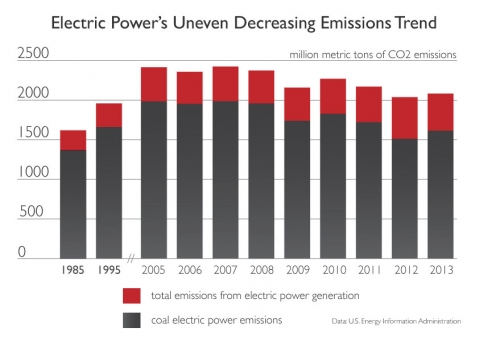 The Clean Power Plan’s goal is to, by 2030, slash CO2 emissions from fossil fuel-fired power plants by 30 percent of 2005 emissions levels. It’s one of two proposed EPA rules aiming to tackle climate change by reducing the carbon footprint of electric power generation.

The other rule, announced last year, proposes to cap emissions from power plants to be built in the future. Neither rule has been finalized.

The picture of CO2 emissions from both power plants and the energy sector as a whole is complex.

A report released Monday by the U.S. Energy Information Administration, which gathers and analyzes U.S. energy data independently of the EPA, shows a general downward trend of U.S. energy-related CO2 emissions since 2005, a trend that isn’t likely to continue without any policy changes, EIA data show.

In 2012, 40 percent of energy-related CO2 emissions came from electric power generation, and most of that was from coal-burning power plants, EIA data show. Electricity generation from natural gas emits about 60 percent less CO2 per kilowatt hour than coal.

For U.S. power sector emissions to be cut by 30 percent below 2005 levels, nationwide power plant emissions would need to look nearly like they did in 1985, when the U.S. power sector pumped 1.619 billion metric tons of carbon into the air, according to EIA data.

Without the help of the CO2 emissions cuts proposed in the Clean Power Plan, the EIA is expecting overall U.S. energy sector CO2 emissions to rise slightly, drop again in 2016, then very gradually climb each year through 2040.

“In 2016, when we’re assuming mercury and air toxics standards will be enforced, they’re going to result in some coal retirements,” EIA operations research analyst Jeffrey Jones said. “As (electricity) demand continues to increase from that point on, coal use increases to meet energy demand.”

That analysis does not account for the Clean Power Plan, which the EIA has not yet analyzed. The EIA is unlikely to do its own analysis until Congress specially requests it, Jones said.

EIA data show emissions from burning fossil fuels vary quite widely from region to region across the U.S., one reason the EPA is allowing states to devise their own plans to cut power plant emissions.

An EIA report released the day after the Clean Power Plan was announced last week shows that overall U.S. energy-related CO2 emissions fell 10 percent since 2005, but the decline was uneven. During that period, emissions decreased the most in the Northeast and decreased the least in the Midwest.

Two states stood out in the EIA report — Nevada and Nebraska. In Nebraska, energy-related CO2 emissions increased steadily — by 20 percent — between 2005 and 2011 because of new crude oil production there, the shuttering of a nuclear power plant and increased production of biofuels. 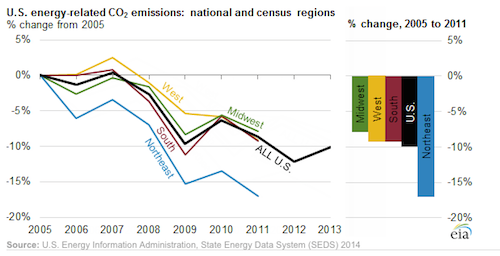 The trend in energy-related CO2 emissions, including those from coal-fired power plants, in different regions of the U.S. since 2005.
Credit: EIA

Nevada saw the greatest decline in CO2 emissions during that period with a greater than 30 percent decrease. The state slashed its reliance on coal for electricity and increased its solar and geothermal power production.

The EIA’s report might seem to suggest that the U.S. has already made significant progress toward the Clean Power Plan’s goal of slashing power plant emissions 30 percent below 2005 levels by 2030.

But the report analyzed all “energy-related” CO2 emissions, which include emissions from the residential, commercial, industrial, transportation and electric power sectors. The Clean Power Plan applies only to fossil fuel-fired power plants

Carbon emissions from coal-burning power plants have followed a similar pattern over the years, totaling 1.575 billion metric tons last year, down from 1.98 billion in 2005.

It’s unclear exactly what effect the Clean Power Plan will ultimately have on nationwide CO2 emissions because its emissions goals could change over the next year until the plan is finalized.

But whatever the plan’s final form, the slashing of CO2 emissions from coal-fired power plants has already begun and is likely to continue.