There’s no way to drive around it: Commuting to work behind the steering wheel emits carbon dioxide and contributes to climate change.

Dense cities are pretty good at keeping those tailpipe emissions low when measured on a per-person basis because many commuters often use trains and buses to get to work. Less dense cities, on the other hand, see more people driving to work from distant suburbs, usually leading to more tailpipe emissions. 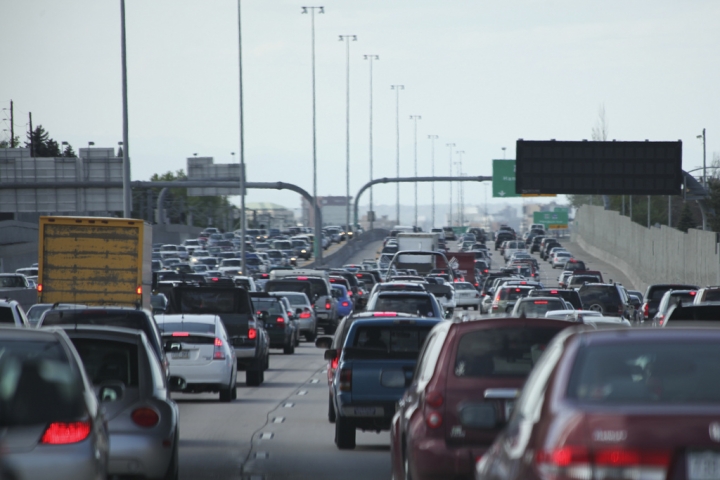 A Boston University study published Monday in the Proceedings of the National Academy of Sciences shows that a major push in cities like Denver to build dense housing, better transit systems and more bike lanes in their urban core doesn’t necessarily lead to lower per-capita CO2 emissions. That’s because suburbs continue to sprawl and residents there still drive to work.

“For the past 25 years, urban planners have been guided by the results of analyses that show how per capita emissions vary with population density across different cities because time-series data for individual cities’ emissions simply were not available,” Ian Sue Wing, associate professor of earth and environment at Boston University and a study co-author said.

The study fills that gap and shows that cities like Denver or Salt Lake can’t quickly become like New York or San Francisco in terms of vehicle emissions per person, he said.

Expanding low-density cities often add population far from centers of shopping and employment, forcing people to commute long distances to work and shopping trips and increasing emissions in the process.

“By contrast, cities that are already dense appear to be adding population much closer to these destination, resulting in faster increases in density, less on-road travel and flat or declining emissions per capita,” Wing said.

The study is the first to measure vehicle tailpipe emissions in major metropolitan areas by using highway traffic data over a period of time — information crucial for city planners to know their city’s impact on the climate and find ways to reduce their carbon footprint.

Nationwide, vehicle tailpipe emissions account for about 28 percent of all CO2 emitted from burning fossil fuels in the U.S. The team’s research shows that urban areas are responsible for about 80 percent of total vehicle CO2 emissions growth in the U.S. since 1980 as cities have sprawled far beyond their urban cores.

Conor Gately, a graduate student at Boston University’s Dept. of Earth and Environment and the paper’s lead author, said his team created the first nationally consistent map of vehicle CO2 emissions at a 1-kilometer scale over a span of 33 years between 1980 and 2012. Previous studies were limited to a single year or measured emissions at a state or national level, he said.

It has long been difficult for cities to measure vehicle CO2 emissions because traffic is highly variable over time as cities grow and shrink, and emissions change from hour to hour depending on the day and season, he said. Traffic and emissions data have come in non-standard formats, making it difficult to compare emissions in one city to another.

Gately said his team’s emissions model using traffic count data changes that and has shown some surprising emissions patterns in many cities.

One of the study’s most important findings was that cities such as New York that were already densely populated 30 years ago saw their per capita vehicle CO2 emissions fall more quickly than other cities that have become denser more recently. 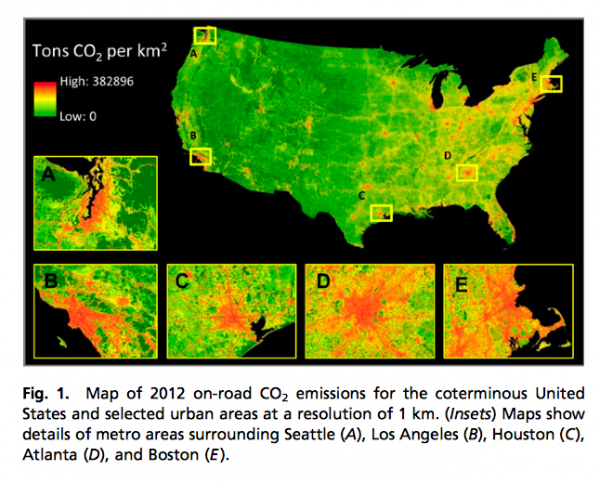 “We hypothesize that this is due to these more-dense cities already having the public transit infrastructure and more walkable, compact urban designs that makes it easier for people to move around the city with less driving,” Gately said.

Cities have had to reach a certain density — about 1,650 people per square kilometer — for vehicle emissions to fall quickly. Urban areas such as Phoenix, Denver, Houston, Atlanta and Salt Lake City fell below that density, and each saw its per capita vehicle emissions rise. Each of those cities also saw their densities increase between 1980 and 2010, but only slightly.

Some of the densest cities with more than 1,650 people per square kilometer — New York, San Francisco, Boston, Washington, D.C. and even sprawling Los Angeles — saw their per capita vehicle emissions fall or stay flat as density increased. A major exception was Chicago, which saw density decrease and emissions increase.

Other scientists have mixed opinions about the usefulness of the study.

She said the study allows for a better understanding of the CO2 emissions from the transportation sector and reveals nuances in the relationship between population density and traffic emissions.

“The results could be useful for both local and national planners and policymakers seeking to implement effective greenhouse gas emission reduction strategies,” McKain said.

The study’s contribution to scientists’ understanding of vehicle emissions is mainly in its methodology, John DeCicco, a research professor at the University of Michigan Energy Institute, said.

“We now have powerful computational tools and large geographically resolved data sets, so a detailed mapping such as this is possible,” he said. “As far as useful implications (of the study) regarding the urgent need to control GHG emissions, it’s unclear to me.”

Robert Andres, a scientist at the Climate Change Institute at Oak Ridge National Laboratory, said the study’s emissions model looks only at annual emissions, limiting its use for urban planning.

“Due to the annual temporal resolution, I am not sure this study will directly lead to decreased urban transportation emissions,” he said.

You May Also Like:
The Future of Mountain Glaciers Is Bleak
Spring is Coming Earlier
California, Quebec Teaming Up On Climate Change
Public Lands May Be America’s Best Climate Defense