The world’s biggest greenhouse gas polluters, the U.S. and China, on Tuesday threw their political and climate-changing weight behind an effort to strike an international deal to slow global warming.

“We cannot condemn our children, and their children, to a future that is beyond their capacity to repair,” President Obama said during his speech at the U.N. Climate Summit in New York. “Not when we have the means, the technological innovation and the scientific imagination to begin the work of repairing it right now.” 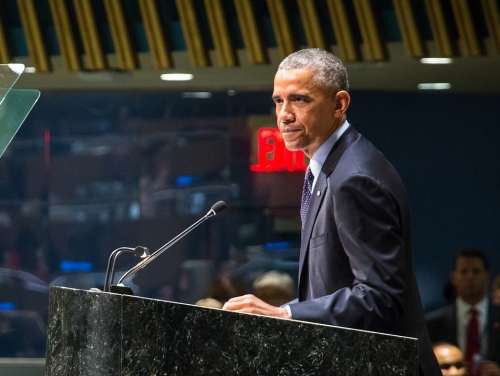 Speaking just two days after hundreds of thousands of people took to the streets of New York and other cities in marches demanding action to protect the climate, Obama and a senior Chinese official made important announcements about their efforts to do so.

Both countries have long lagged on climate action, angering the leaders and citizens of other nations. Without the support of China and the U.S., there can be no real hope of a climate treaty that effectively slows climate change. But, as the price of renewables has fallen and the impacts of climate change and air pollution have become more clear in recent years, both countries have begun striving to replace energy from coal and other fossil fuels with cleaner alternatives.

“Today I am here, personally, as the leader of the world’s largest economy and its second largest emitter, to say that we have begun to do something about it,” Obama said. “We will do our part, and we will help developing nations do theirs. But we can only succeed in combating climate change if we are joined in this effort by every nation, developed and developing alike. Nobody gets a pass.”

Obama said that, by early next year, the U.S. would outline its commitments to reduce greenhouse gas pollution under a treaty that’s scheduled to be finalized in Paris next December. The overall goal of the treaty is to keep global warming to within 2°C, or 3.7°F. The world is currently on track to blow way past that goal.

Announcements about pending announcements might not sound exciting, but negotiation watchers said the statement was important, showing that the U.S. is keeping to a negotiations timeline that was agreed upon during talks in Warsaw last year.

Unrelated to the planned climate treaty, Obama announced that he would sign an executive order directing federal agencies to consider climate change and climate impacts when making decisions about international development projects. The order would also direct agencies to share American climate adaptation technology and knowhow with other countries.

Tuesday’s summit was the first of its kind in five years, held in the midst of two weeks of U.N. General Assembly meetings. It was organized at the behest of U.N. Secretary General Ban Ki-moon, who is trying to advance the ongoing climate negotiations.

Obama announced that the U.S. would meet a 2010 commitment to reduce its greenhouse gas pollution levels by 17 percent below 2005 levels by 2020, which is when the planned new climate treaty would take effect.

“By early next year, we will put forward our next emissions target, reflecting our confidence in the ability of our technological entrepreneurs and scientific innovators to lead the way,” Obama said. “Today, I call on all major economies to do the same.” 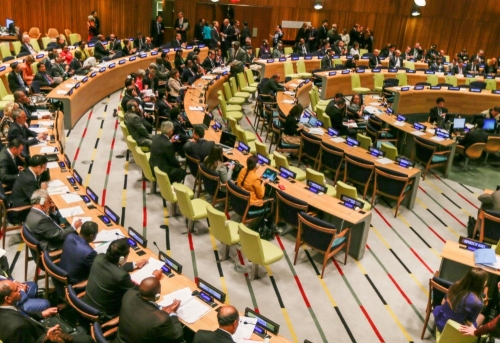 Minutes after Obama walked away from the podium, Chinese Vice Premier Zhang Gaoli indicated China might do the same.

Jake Schmidt, the international climate policy director at the Natural Resources Defense Council, said Obama’s speech was directed at an international audience — but that he was also trying to mobilize support for climate action at home, in part by touting the economic benefits of investing in renewable energy.

“He’s trying to clearly make the case that it’s in our own interest to act,” Schmidt said, “and that it’s critical that we engage in an international agreement that’s meaningful and that solves this problem.”

When China’s Vice Premier spoke, he went further than China has gone before in indicating that its upcoming commitment, which he said would be announced “as soon as we can,” would include a carbon emissions peak.

“Peaking would set an absolute limit on emissions levels, which is an important shift,” said David Waskow, the director of the World Resource Institute's international climate initiative. “That’s the highest-level political signal that’s been sent by the Chinese government about peaking.”