From a climate change perspective, China’s carbon footprint is huge: It consumes nearly as much coal as every other country in the world combined. And it’s the world’s largest greenhouse gas emitter.

But it may be possible for China to shake most of its reliance on fossil fuels, in part by producing more than 85 percent of its electricity and more than 60 percent of its total energy needs from renewables by 2050, according to a study published Monday.

Showing that it’s feasible for China to fully embrace renewables to reduce its greenhouse gas emissions is critical as it heads into the Paris international climate negotiations in December,  and as it works to achieve its emissions reductions goals under the climate pact China and the U.S. struck in November. Under the pact, China agreed to peak its greenhouse gas emissions by 2030 and increase the use of non-fossil energy by 20 percent.

The study, by the China National Renewable Energy Centre and a variety of other Chinese organizations with support from the U.S. Department of Energy, shows China can do a lot more than that.

It’s both technologically and economically feasible for China to rely on renewables for more than 60 percent of its total energy needs, including transportation, by 2050, the study says. On the way there, China has the ability to reach the peak of both its fossil fuel consumption and carbon dioxide emissions by 2025. China in 2050 could get more than 85 percent of its total electricity from renewables, 64 percent of of which could be from wind and solar power. Under that scenario, only 7 percent of its power would come from coal after having developed more than 200 gigawatts of electric power storage.

“For this target, we need to work together, especially USA and China,” both of which have large populations and big economies, Li Junfeng, director general of China’s National Center for Climate Change Strategy and International Cooperation, said Monday at a news conference.

Critics in China have said the cost of renewables is too high to achieve those goals, but the high use of renewables in Germany and other European countries shows that China can do it too, Wang Zhongying, director of the China National Renewable Energy Center, said.

The environmental and social costs of coal-fired power plants outweigh the costs of developing renewables in China, he said.

Many of those social costs are tied to China’s poor air quality, which in Beijing, Shanghai and other major cities, is some of the worst in the world, leading to significant public health problems. Air pollution alone has decreased life expectancy in northern China by 5.5 years, a problem that has led to water contamination and scarcity. The environmental problems connected just to pollution cost China about 3.5 percent of its GDP.

Renewables replacing coal-fired power plants will go far to clean up both the air and water in China, Junfeng said. 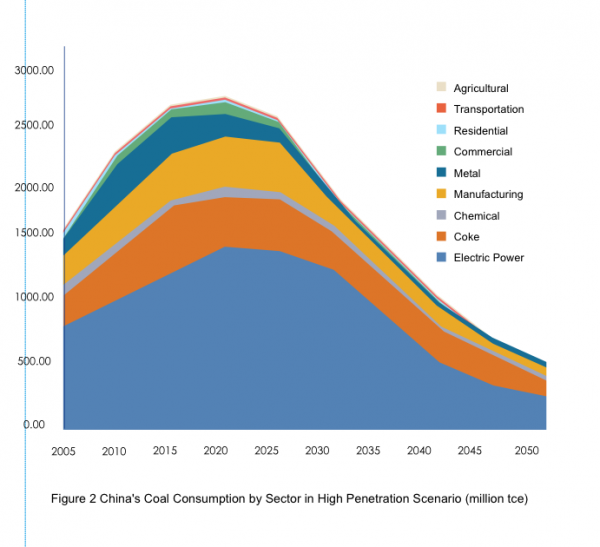 The Chinese study builds upon the U.S. Department of Energy’s research showing that it’s technically feasible and cost-effective for the U.S. to obtain at least 80 percent of its electricity from renewables by 2050, and that wind can supply 20 percent of U.S. electricity by 2030.

“The bottom line is, within the U.S. studies, you can do this,” Samuel Baldwin, Chief Science Officer of the U.S. Department of Energy’s Office of Energy Efficiency and Renewable Energy, said. “Within an operational level, the costs are quite reasonable.”

Baldwin said that many of the myths about renewables — including that renewables won’t be able to become a major supplier of energy because the wind doesn’t always blow and the sun doesn’t always shine — can be cost-effectively overcome with technology and electric power system management as different kinds of renewable energy sources can work together to provide a steady stream of energy regardless of the weather or the time of day, he said.

That can only happen in China if the country deregulates its electric power market and establishes a competing market by 2025, Zhongying said.

If no such power market is established, “there is no hope for our study,” he said. “The next 10 years is very important for China.”