In the wake of New York Mayor Michael Bloomberg’s announcement of a $19.5 billion plan to make the Big Apple better prepared for future extreme weather events on the scale of Hurricane Sandy, dozens of other cities and counties in the U.S. are showing increased interest in pursuing so-called “climate resilience” plans.

On Tuesday, 45 local elected officials from cities A (Ann Arbor) to W (Washington, D.C.) signed on to a new campaign called Resilient Communities for America to share information and take actions that would bolster their communities against the multifaceted challenges posed by global climate change, including more frequent and severe extreme weather events and, in coastal cities, sea level rise. 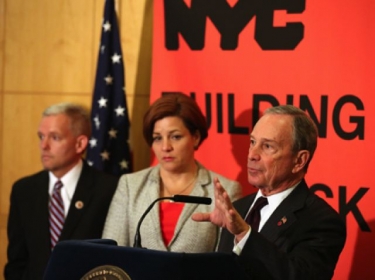 Some cities, like New York, are already taking action. Broward County, Fla., is part of the Southeast Florida Regional Climate Compact, which recently created a climate action plan that includes coastal flood protection measures. Broward County experienced flooding from Hurricane Sandy as well as a high tide event, damaging portions of the vital A1A coastal roadway. Farther south, the city of Miami is incorporating sea level rise into its Post-Disaster Redevelopment Plan, slated to be completed by the end of the year.

And smaller cities are beginning to assess their climate change risks, too. Cambridge, Mass., for example, is conducting a $300,000 climate-change vulnerability assessment.

A major limitation facing local leaders, though, is a lack of federal assistance during this time of tight local budgets. A new report released on Wednesday points out that the federal government is spending far more money on post-disaster assistance than it is on pre-disaster preparation and mitigation.

The report, by the Center for American Progress, a progressive Washington think tank, found that the federal government spent just $22 billion on resilience efforts between fiscal year 2011 and fiscal year 2013. This compares to the $136 billion the government doled out in separate disaster relief and recovery funds during the same period.

“Based on those figures, federal taxpayers spent nearly $6 for disaster recovery for every $1 spent to increase general community resilience over the past three years,” the report said.

According to FEMA, every dollar spent on enhancing communities’ ability to withstand extreme events reduces the cost of damage from such events by about $4.

The report noted that the federal government does not provide a comprehensive tally of its spending for community resilience and pre-disaster mitigation programs, such as funding the installation of new coastal protection measures to guard against coastal flooding during a storm, or buying out owners of shoreline homes to reduce the amount of exposed property in storm-prone areas, as the state of New York is now doing post-Sandy. The report found a total of 43 programs that deal with resilience, scattered around seven cabinet agencies.

Most of the programs are located in the Agriculture Department, which assists farmers in coping with droughts and floods — near-constant hazards during the past two years.

The past few years have been extremely costly in the U.S. as extreme weather and climate events — from the devastating Great Plains drought of 2012 and Hurricane Sandy to the deadly 2011 tornado season — took a heavy toll.

According to the National Oceanic and Atmospheric Administration, there were 11 extreme weather and climate events during 2012 that each topped $1 billion in damage costs, for an estimated total bill of $110 billion. That was the second highest cost on record since such calculations began in 1980. 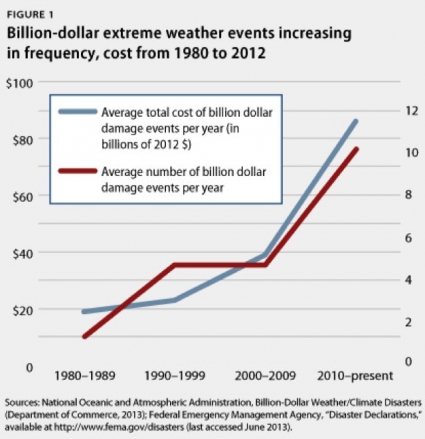 Disaster costs in the U.S. have been rising in recent years, tied in large part to the increased amount of property and people in harm's way.
Credit: Center for American Progress.

Local leaders have been feeling the effects of such extremes, and the new initiative — even though it does not come with new money attached — aims to raise awareness and promote knowledge sharing to improve climate resilience policies. The program announced Tuesday is being sponsored by Local Governments for Sustainability USA (ICLEI USA) along with other nonpartisan groups. It encourages local governments to assess their vulnerabilities to extreme weather and other climate change-related hazards, and to take action whenever possible before disasters strike while also reducing their own carbon emissions.

Des Moines Mayor T.M. Franklin Cownie, who signed the ICLEI Resilient Communities pledge, told Climate Central that each local government faces a unique challenge from climate change. In the case of his city, one of the biggest climate change-related threats is increased precipitation extremes, including both drought and heavy rainstorms.

Last year at this time, Iowa was experiencing a severe drought, whereas the spring of 2013 was the wettest in state history.

“There are things that are happening to us that seem way out of the ordinary,” Cownie said in an interview. He rattled off a list of recent extremes, including three nearly 500-year flood events in 2010 alone, along with floods that occurred in 2008.

“We think that we need to plan for it, and we need to create some resiliency so we can pop back. It’s sort of like you get punched and you get back up,” Cownie said.

Cownie said that his hands are tied at the local level when it comes to implementing some flood protection programs, since the Army Corps of Engineers controls the levees along the Des Moines River, which flows through the city. “At the end of the day there is the money component.”

He favors steps to make it easier for state and local governments to receive federal assistance to take proactive steps that would reduce disaster losses in the long run. “Aren’t we better off doing the planning and preparedness to make us be a resilient country than waiting for a disaster to strike?” Cownie said.