Just when it seemed like California’s drought couldn’t get any worse, it did: A staggering one third of the state is now in the worst stage of drought.

The latest update from the U.S. Drought Monitor, released Thursday, showed the amount of the state in “Exceptional Drought” — the highest category — expanding to about 33 percent from 25 percent. The increase came not because of a lack of rainfall, as the state is in its dry season, but because drought experts and local officials are getting a better handle on the increased impacts that are emerging after three years of subpar precipitation. 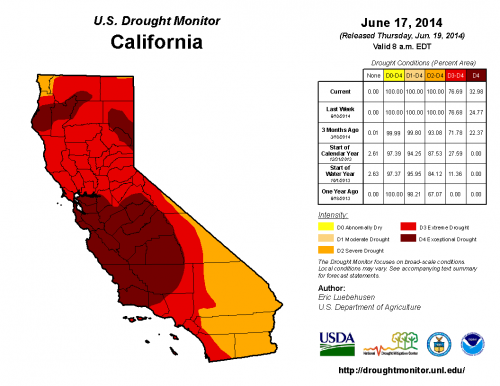 As of June 17, 2014, the highest category of drought (Exceptional) covered one third of the state of California. The whole state was in some form of drought.
Click image to enlarge. Credit: U.S. Drought Monitor

“This drought in California is comparable to the drought that affected the state in the late 1970s,” Jake Crouch, a climate scientist with the National Climatic Data Center, told reporters Thursday in a teleconference.

With the dryness, the state expects to see an intensified wildfire season this year; in fact, several wildfires have already burned across parts of the state, even though the traditional wildfire season comes in the early fall. Meager snowpacks and rainfall have meant less water trickling into reservoirs just as summer amps up demand. Though most major cities haven’t yet seen an impact on water supplies, some smaller towns have seen their supplies drop, and farmers have had to let normally productive farmland fallow. Gov. Jerry Brown declared a drought emergency for the state in January and has asked residents to voluntarily reduce their water use by 20 percent to avoid mandatory restrictions.

“The impacts of three consecutive years of dryness/drought are really beginning to manifest themselves, and that’s why you’re seeing this ‘delayed’ increase,” said Eric Luebehusen, a meteorologist with the U.S. Department of Agriculture and the author of this week’s Drought Monitor report.

California has seen three consecutive winters, traditionally the rainy season, come up relatively dry. In particular, 2013 was the driest year on record in parts of the state, with some places running precipitation deficits of 30 to 40 inches. As of May 15 of this year, 100 percent of the state was in the highest three categories of drought.

While the drought can’t be directly linked to climate change, experts have said the unabated warming of the planet will influence the development of drought in places like California in the future.

Water supplies in California’s reservoirs, which are built to factor in drought years, were at fairly good levels going into last winter, but the heat of the subsequent dry season sent demand for water soaring and reservoir levels declined.

Currently, reservoirs in the state are at anywhere from 14 to 67 percent of capacity, according to the most recent numbers from the California Department of Water Resources, which run through May 31. Precipitation amounts from July 1, 2013, to June 1, 2014, range from 35 percent of normal in Los Angeles to 53 percent in San Francisco and Sacramento.

Luebehusen called the precipitation totals in the north of the state “abysmal” and said that local officials were getting word of greater impacts further east and south. It was this more complete picture that prompted him to move some areas in North and Central California that had been in D3, or “Extreme,” drought into D4, or “Exceptional,” drought he said.

“It’s really just us getting a firmer handle on how bad the situation has become as the third year of drought continues,” Luebehusen told Climate Central in an email.

California officials are hoping that an emerging El Niño event will turn out to be a strong one, as those tend to be associated with increased precipitation in the region. Because the drought has been several years in the making, even with a boost from an El Niño, it will take several years to undo, experts have said. And for the next few months it won’t be going anywhere.

In fact, the situation could still worsen as the impacts of the drought increase and water becomes even harder to come by in some areas. Luebehusen said the evaluation of the impacts to the San Joaquin Valley, a major agricultural area, and its surroundings are still ongoing and that some of the satellite readings “are looking dreadful from (San Francisco) south toward Santa Barbara and then across much of (Southern) CA.”