California’s Fog is Fading Away, Crops Could Suffer

For California's highway managers, research showing a decline in the Central Valley's unique tule fog is no surprise.

The thick ground fog, an iconic weather feature that settles in the San Joaquin and Sacramento valleys during colder months, historically has been a bane to motorists. 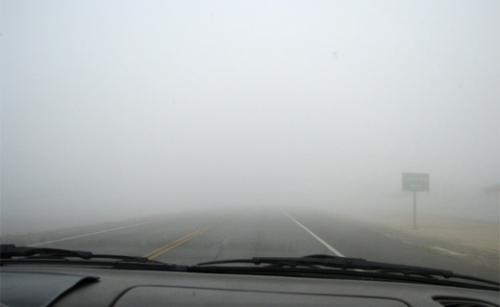 Researchers have found a 46 percent decline in foggy days over the past three decades, helping motorists but potentially harming the state's valuable fruit and nut trees that depend on the cool and moisture the fog provides.
Credit: emdot/flickr

Twenty-, 50-, even 100-car pileups are not unheard of in the dense fog. The California Department of Transportation (Caltrans) spent $12 million on a system to detect fog and warn motorists along a notoriously accident-prone 13-mile stretch of Highway 99 south of Fresno.

But since its 2009 installation, the state hasn't had an opportunity to assess whether such measures are worth the cost. The fog, once a reliable indicator of winter, has declined significantly over the past three decades, researchers report.

'We Don't Have the Rain'

“There has not really been a lot of fog for us to test the system,” says John Liu, deputy district director for Caltrans District 6's maintenance and operations division. He noted that part of the reason is undoubtedly the fact that California is in the midst of one of the worst droughts on record. “All the locals know that the first day after it rains, when it's very cool at night, that's when the fog forms,” says Liu. “When we don't have the rain, we don't have the tule fog.”

That should be welcome news for California motorists, since tule fog, named after the region's tule grass, can reduce highway visibility to nearly zero. The fog has been blamed for numerous large, multi-car accidents, one of the worst of which was a 108-vehicle pile-up in November 2007. The chain reaction collision, which took 10 minutes to unfold, killed two people and injured 40, shutting down Highway 99 for more than 12 hours.

While fog is hazardous, its disappearance is troublesome, Liu added. “The fog can be bad, but we desperately need the rain.” 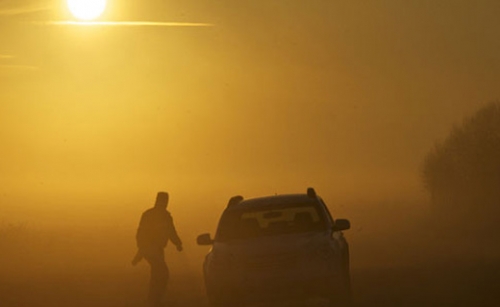 A lone photographer in the fog at the San Luis National Wildlife Refuge.
Credit: Linda Tanner/flickr

The study, published recently by researchers at the University of California, Berkeley, indicates a longer-term trend may be at work.

They tracked a 46 percent drop in the number of fog days in the region over the past 32 winters. Pairing NASA and U.S. National Oceanic and Atmospheric Administration satellite records with data from a network of University of California weather stations, the researchers were able to show that despite great year-to-year variability, the overall trend in fog is downward.

The authors of the new study stress that the decline in winter tule fog raises a red flag for the state's multibillion dollar agricultural industry, since crops such as almonds, pistachios, cherries, apricots and peaches go through a necessary winter dormant period brought on and maintained by colder temperatures. The tule fog helps contribute to the winter chill.

“The trees need this dormant time to rest so that they can later develop buds, flowers and fruit during the growing season,” said study co-author Dennis Baldocchi, professor in UC Berkeley's Department of Environmental Science, Policy and Management.

“An insufficient rest period impairs the ability of farmers to achieve high quality fruit yields,” said Baldocchi, whose own father grew almonds and walnuts in Antioch and Oakley.

California's Central Valley provides 58 percent of the nation's non-citrus fruit and nut crop, according to state agriculture statistics. The California almond crop alone is worth almost $4 billion a year, and Fresno County is the state's top agricultural producer, with nearly $7 billion in agriculture alone in 2011, the latest year available. 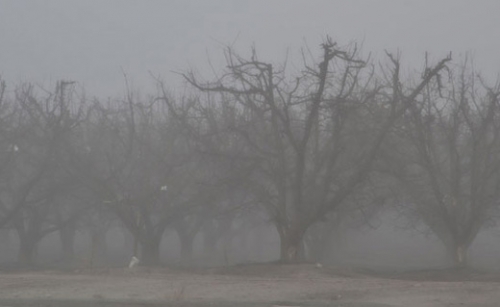 The tule fog brings a winter chill, which contributes to the much-needed dormant period of fruit trees.
Credit: Anita Ritenour/flickr

But ambient air temperature alone may not adequately reflect the heat experienced by the crops, said Baldocchi. Direct sunlight can heat the buds so that they are warmer than the surrounding air temperature. As a result, fog is important in shielding the buds from the sun and helping them accumulate winter chill.

Climate forecasts suggest that the accumulation of winter chill will continue to decrease in the Central Valley. Baldocchi said that fruit developers are already trying to develop cultivars that can tolerate less winter chill.

“Farmers may also need to consider adjusting the location of orchards to follow the fog, so to speak,” said Baldocchi. “Some regions along the foothills of the Sierra are candidates, for instance. That type of change is a slow and difficult process, so we need to start thinking about this now.”

For now, Caltrans' system on alerting and training drivers to slow down before hitting heavy fog is idle, with no forecast whether it will be needed next year.

About a year after 2007's fatal 108-car pileup, Caltrans began installation of what it hoped would be the latest technology for detecting fog hazard and warning drivers, using microwave sensors that pick up signals when vehicles slow down. The project also included a driver education program and a 511 phone line that motorists could use to call in for information. “It does work, but we haven't been able to do a rigorous before-and-after study to see if it's really a cost-effective approach,” Liu said.

“We haven't had the really thick pea-soup kind of fog” said Liu of conditions he remembers contending with regularly on his own drives on Highway 99, 25 years ago when he, himself, was a student at UC Berkeley.