California just finished the hottest first half year on record, a period going back 120 years, according to the national climate overview for June released by the National Oceanic and Atmospheric Administration (NOAA). 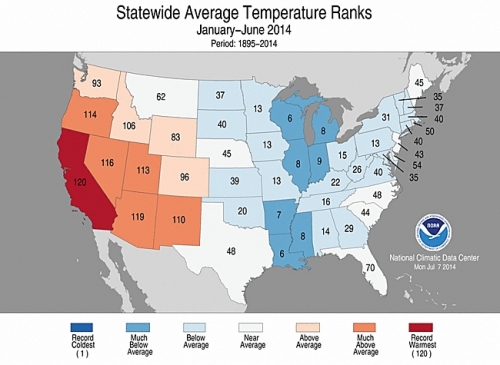 Temperature rankings for each U.S. state for the period from January through June 2014. California had its warmest such period on record.
Click image to enlarge. Credit: NCDC

The statewide average temperature for the period was 58°F, or 4.8°F above the 20th century average. That bests the previous warmest January-June in 1934 by 1.1°F — a substantial difference, said Jake Crouch, a climate scientist with NOAA’s National Climatic Data Center.

And though temperatures across the U.S. as a whole haven’t set any records this year, the global average has been a different story. The year through May was the fifth warmest on record, according to NOAA data, which ranked May as the warmest on record, as did NASA and the Japan Meteorological Agency (JMA). Preliminary NASA data suggests that June 2014 will come in as the third warmest June on record, while the JMA ranks it as the warmest in their temperature records. (Different agencies process temperature data using slightly different methods, but the differences between rankings are very small.)

NOAA expects its global data for June, which will be released on July 21, to be “in the same ballpark” as the NASA and JMA rankings, Jessica Blunden, a climate scientist with ERT, Inc., and a NOAA contractor who helps write the monthly reports, said in an email.

With an El Niño expected to develop late this summer or in the fall, there is a chance that 2014 could move into the spot as the warmest year on record, though the climate phenomenon’s effects are generally most pronounced in the colder months, so the boost it gives to global temperatures could be reserved for 2015.

Warming nighttime temperatures are a concern with global warming, as they lessen the evening relief places rely on during heat waves. 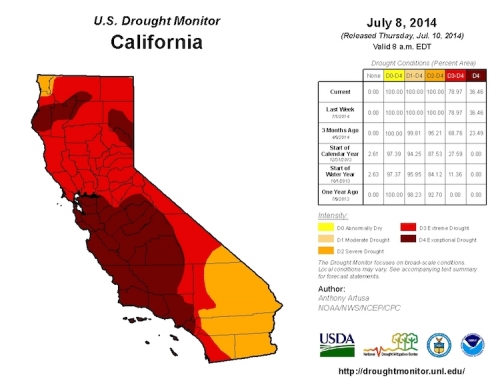 The state of drought in California as of July 8, 2014. All of the state was in some form of drought, with nearly 80 percent in the worst two categories and almost a third in the worst.
Click image to enlarge. Credit: U.S. Drought Monitor

All six months of 2014 so far in California have ranked in the top 10 percent of warmest, according to NOAA. This heat, along with a rainy season that failed to live up to its name, has put all of the state in at least severe drought conditions, with nearly 80 percent in the extreme or exceptional drought, the two highest categories recognized by the U.S. Drought Monitor.

Temperatures in California are up again in mid-July, as a high-pressure ridge sits over the West and brings in dry conditions, the counterpart to a trough that has dipped down and brought cooler weather to the East once again.

The dryness out West is in stark contrast to the rains that fell elsewhere and made June the sixth wettest on record. Most of those rains fell across the Midwest and Central and Northern Plains, bringing with them serious floods. The rains fell in part because the jet stream struggled to migrate northward as it usually does at this time of year, allowing low-pressure systems to wash across the U.S., in place of the high-pressure ridges that typically settle in and send temperatures rising.

“These contradictory points make the connection between the most recent precipitation extremes and climate change hard to make,” Crouch told Climate Central.