California’s main water reservoir — its mountain snowpack — has made a triumphant return to the Sierra Nevada following severe shortfalls in recent years.

A string of winter storms boosted by El Niño has restored much of the mountain snow that melts through summer to help top up the state’s reservoirs, but the prognosis for the decades ahead remains grim. 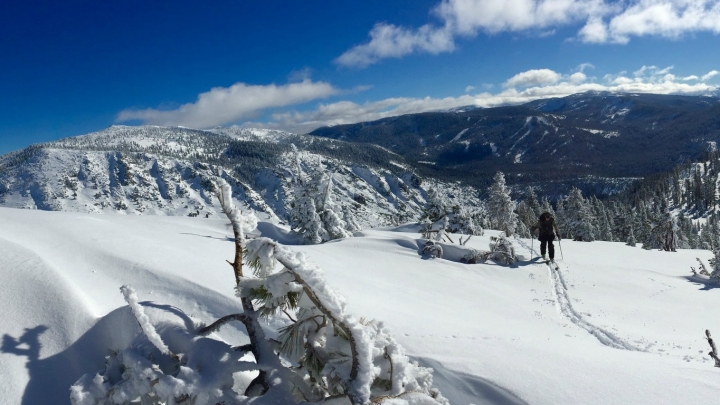 Climate change is projected to corrode California’s snowpack, forcing water officials to rethink how they store and distribute water in a state that’s prone to prolonged droughts. Work is underway to improve the management of water stored in the state’s underground aquifers, which could help compensate for its loss of snowpack storage.

Despite this month’s storms, which mostly drenched the state’s northern regions, the Sierra Nevada snowpack contains 10 percent less water than average for this time of year. That’s a stark improvement from the same time last year, when it was worse than 90 percent below average.

The low snowpack experienced last year is expected to become more common during the decades ahead — even though storminess in the region is projected to increase. Last year's was the smallest snowpack on record, caused primarily by a shortfall in large winter storms, fueling a withering drought exacerbated by high temperatures.

Within 50 years, snowpacks as diminutive as last year’s could occur on average more than once every decade, said Michael Dettinger, a U.S. Geological Survey hydrologist.

“Last year was the real story, as its 5 percent of normal snowpack was like something right out of the far future,” Dettinger said. “Looking to the future, we expect long-term declines compared to this year.”

Much of central and southern California remains in severe drought, but U.S. Department of Agriculture meteorologist Brad Rippey said there has been substantial improvement in northern California.

Reservoir operators in the state are “encouraged” by the sudden deepening of the snowpack this March, said Lisa Lien-Mager, a spokeswoman for the Association of California Water Agencies. But she said changes caused by climate change are a major concern for the group’s hundreds of members.

The kinds of storms that boosted the state’s snowpack this year are expected to become less effective as the impacts of climate change continue to worsen. Global warming is projected to reduce California’s snowpack by causing it to melt earlier in the year, and by causing more rain to fall instead of snow.

“That flips our system on its end,” she said. “It was all designed to capture gradual runoff from snowmelt. If we’re moving away from that kind of pattern, then we may be getting too much runoff at a certain time, and we won’t necessarily be able to capture it all.” 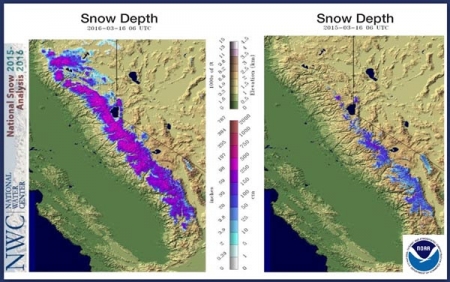 California’s natural aquifers offer cavernous potential spaces where that water runoff could be stashed until it’s needed. Aquifers can be recharged by pumping water into them, or by allowing water to seep into them.

Park Williams, a bioclimatologist at Columbia University who is about to begin a three-year project aimed at better understanding Californian snowpack trends, likened the state’s aquifers to an “extremely large” reservoir — one that has long been mismanaged.

Researchers at Stanford have shown that California’s natural aquifers offer cheaper options for boosting water storage capacity than expanding or building above-ground reservoirs. Storing water in aquifers was also shown to be cheaper than desalting and filtering sea water.

Under the Sustainable Groundwater Management Act, state officials could take over management from local water agencies and districts that fail to take mandated steps to ensure that groundwater is being managed sustainably.

The law wasn’t designed to boost groundwater storage to offset the effects of climate change, per se, but Jeanine Jones, a California water official who has been working on drought-related issues, said it could help “facilitate” such improvements.

“Even long before we had this new legislation, going back several decades, water agencies in California have embarked on programs to develop large managed groundwater storage projects,” Jones said.

“I do think the state is doing a great job — they’ve been very engaged and working incredibly hard,” Moran said. “But it’s a huge undertaking.”

You May Also Like:
New Hope For U.S. Coastlines Even As Seas Rise
Healthy Diet May Reduce Gas; Greenhouse Gas, That Is
2015 One for the Climate Record Books
Natural Gas Poised to Surpass Coal For Electricity in U.S.