California Has Hottest Start to Year While Midwest Chills

The heat records keep falling for California. The state has had its hottest first seven months of the year, crushing the previous mark. Neighboring states have also baked, though not quite at record levels, helping contribute to both the spread of drought and large wildfires. At the same time, cool weather had a number of Midwest states experiencing July temperatures that were closer to September norms.

On Tuesday, the National Climatic Data Center (NCDC) released its monthly climate update for the U.S. and it contained more cruel news for California. Precipitation was near average throughout the state, but it had a negligible impact on the state’s record-setting drought because summer is its dry season. To reinforce that, NCDC noted that while San Francisco received 800 percent of its usual July rainfall, that equalled only 0.08 inches. 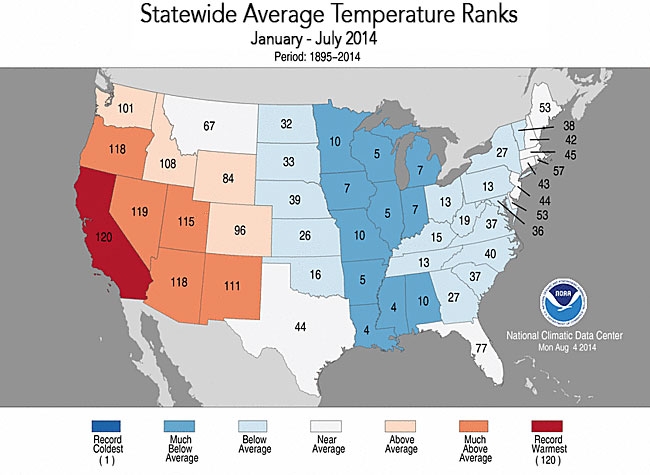 Heat continued to bake the state, fueling a drought that’s projected to cost $2 billion by year’s end. California had its fifth-warmest July on record, including pockets of record warmth along the northern coast. July’s heat kept the state on track for its warmest year in 120 years of recordkeeping. Since January, the state’s average temperature has been 4.6°F above the 20th-century average. That smashes the previous record by 1.4°F.

While heat was the story in the West, persistent cool weather continues to be the story for the eastern half of the country. The Midwest and Southeast were in the bullseye for a mid-summer’s chill with 12 states stretching from Louisiana to Michigan recording one of their 10-coldest Julys. That includes a record cool July for Indiana and Arkansas.

When the temperature extremes on both side of the Mississippi River were averaged, the U.S. as a whole had a near-average July with temperatures just 0.3°F below average.

By now, many are familiar with the hot West-cool East divide that’s been a recurring feature for the U.S. since winter. North Pacific Ocean temperatures could be to blame for keeping hot air trapped in the West and driving cold air down from Canada across the eastern half of the country.

“The pattern of a warm West and cool East has been a persistent for most of 2014. Very warm sea surface temperatures in the northeast Pacific, off the coast of Alaska, is associated with the pattern of a ridge in the West and a trough in the East,” Jake Crouch, a scientist at NCDC, told Climate Central in late July.

Some research has also suggested that while natural shifts have driven this pattern, climate change could play a role in the future. In the nearer term, El Niño could shake up the pattern in different ways.

Last week, the Climate Prediction Center forecast El Niño was still likely to form this fall, though they lowered the odds of their forecast to 65 percent. If El Niño forms, temperatures in the western U.S. are likely to get another (and perhaps unwelcome) boost. The northern half of the country could also see temperatures trend up a bit. And perhaps most importantly, parts of the West, including California, could see an uptick in precipitation, which could finally start to beat back the state’s crushing drought.

You May Also Like
87 Cities, 4 Scenarios and 1 Really Hot Future
Keystone XL Will Spike Oil Demand and CO2, Study Says
Odds of El Niño Drop; Still Expected to Form
Has Your City Reached its Peak Heat Yet?