California introduced a world-leading carbon dioxide cap-and-trade program to drive down pollution rates after lawmakers approved an ambitious climate protection law in 2006. It also changed rules affecting utilities, spurring investments in some of the biggest solar power plants the world has yet seen.

But an emerging body of research shows it’s going to take more than a clean energy blitz to help the state comply with the historic California Global Warming Solutions Act. 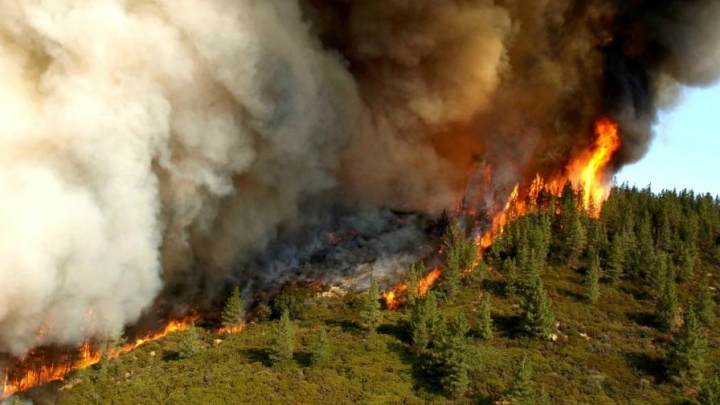 A Californian task force has been handed the confounding task of figuring out how forestry and land management practices could be improved to prevent what scientists say are surprisingly high levels of climate pollution escaping from its forests and other wildlands.

A new study has shown that greenhouse gases are billowing out of the state’s forests faster than they are being sucked back in, with unnaturally intense wildfires mostly to blame.

“Ecosystems are regrowing, but not fast enough,” Patrick Gonzalez, a U.S. National Park Service climate change scientist involved with the research, said. “The losses are outpacing the growth. The key element here is wildfire.”

From 2001 through 2010, the state’s wildlands were responsible for about 8 million tons of carbon pollution annually — more climate pollution than is released every year by the entire economy of Vermont.

That was the conclusion of a sophisticated analysis requested and partly funded by California’s air resources board. Wildfires affecting a small portion of the state were responsible for two-thirds of the estimated losses of carbon from what had been living plants.

Under more stable natural conditions, the state’s forests would be expected to absorb about as much carbon as they lost every decade. At a time of unnaturally high carbon dioxide levels, the forests would ideally absorb more of the greenhouse gas than they produce. But the balancing act has been thrown off kilter.

“There's a long history of discussion of using forests to sequester atmospheric carbon,” said Michael Goulden, a University of California at Irvine associate professor who studies the state’s forests, but who wasn’t involved with Gonzalez’s research. “This paper points out that any increase in forests’ carbon stock may prove ephemeral. Eventually, forests are disturbed, and then this extra carbon is released.”

Gonzalez led a team that used field measurements and satellite data to compare statewide vegetation coverage at the beginning and end of the study period. The analysis was published as a peer-reviewed paper in Forest Ecology and Management, building on earlier work that provided more tentative findings in a state report published in late 2013. The new study was the most comprehensive stocktaking of fluctuating carbon reserves ever undertaken for California’s landscapes.

Much of the carbon released by burned vegetation is thought to have entered the atmosphere, mostly as climate-changing carbon dioxide, though some of it would still be lying on the ground inside rotting tree trunks and other downed vegetation.

Decades of fire fighting are the major culprit. Fire suppression policies have allowed fuel to build up on forest floors, and they have allowed forests to grow thick with young trees that burn hotter and over larger areas than was the case under more natural conditions.

Additionally, the West Coast has been warming and drying more rapidly than most of the rest of the world recently, with climate change and natural variation both appearing to play roles in producing dangerously incendiary landscapes. 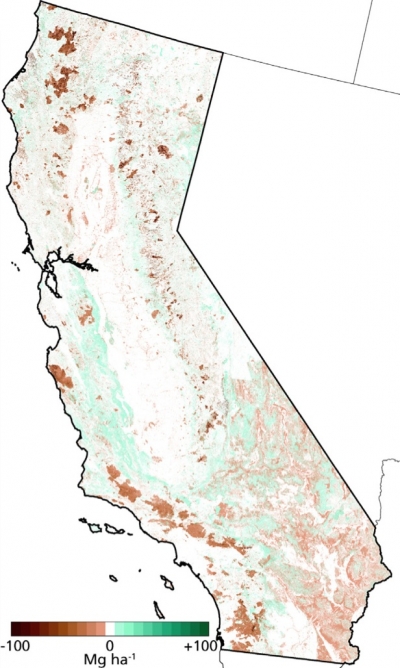 Areas that lost more carbon than they gained from 2001 to 2010 are shown in red. Carbon gains shown in green.
Credit: P. Gonzalez et al. / Forest Ecology and Management

The findings came as an unwelcome surprise, both for California and for the climate in general. California’s 2006 global warming law calls for the state to produce no more climate-changing pollution in 2020 than had been the case in 1990. It also calls for ecosystems — primarily forests — to be releasing no more carbon by 2020 than they’re absorbing.

Some of California’s forests hold more carbon on each square foot of land than is found anywhere else in the world, and it was long thought that the state’s forests and other land ecosystems were absorbing at least as much carbon as they were losing. That’s partly because forests in the state have been recovering in recent decades from once-rampant clearfelling.

But the findings also offer cause for some optimism — optimism that improved land management could reverse the trend.

“In this time period, we’ve seen that there are losses from wildfires,” Karen Magliano, chief of the board’s science division, said. “We’ve also seen that, when you look at healthy forests, that they’re continuing to grow, and continuing to sequester carbon. That’s a very important aspect.”

“They’re looking at a number of different policy options and actions that will help enhance sequestration of carbon,” Magliano said. “Certainly, improved fuel management is one aspect, given that we’ve had many years of very strong fire suppression.”

Gonzalez said it will be “challenging” but “possible,” with appropriate fire management, to nurture mosaics of blazes throughout California’s ecosystems that would “naturally store more carbon” over the long term.

The ideal fire patterns and fire regimes fostered through the state would be “ecologically appropriate,” he said, meaning they would be adapted to unique local conditions.

“It’s also challenging because climate change is altering what the ‘ecologically appropriate’ fire regimes will be,” Gonzalez said. “Nevertheless, when successful, such fire management will produce stands of older, larger trees whose long-term carbon storage can outweigh the short-term emissions.”

Once that happens, California’s forests will rejoin the human residents of the state in their fight to slow climate change.

You May Also Like:
2014 Will Go Down As Hottest In California’s History
Heat Turbocharged California’s Epic Drought
Report: Wildfires & Air Pollution, A Hidden Hazard