Californians are hoping big rains will relieve the drought emergency declared in the state last week. It could be in the form of a miracle March rainstorm, or a sudden drastic shift in the weather pattern that is keeping the winter rains away.

The state is drying up quickly, but cities across the state are responding to the drought in a variety of ways — from imposing water restrictions immediately to doing nothing at all.

Though scientists aren’t yet certain if climate change has contributed to the severity of the drought in California, the state just experienced its driest year on record in 2013 after an extremely dry decade with no end to the dry spell in sight. A persistent high pressure ridge is lingering off the West Coast, deflecting California’s typical winter storms away from the state.

The latest U.S. Drought Monitor shows that more than 98 percent of California is experiencing some level of abnormal dryness, with 89 percent under severe or extreme drought conditions. That means the water content of the Sierra Nevada mountain snowpack on which so many cities rely for their water supply is critically low — 25 percent of normal in the Sierra — and reservoirs are drying up fast.

The stakes are high: California's biggest cities are seeing their drinking water supplies threatened, while agriculture and the jobs reliant on the Central Valley's crop production are at risk as their water supplies begin to disappear. Hundreds of thousands of acres of farmland could go unplanted this year in the Central Valley, as farmers fallow land because of lack of water, an overall agricultural impact that could reach $1 billion this year, according to Fresno-based Westlands Water District figures.

And, the longer the drought, the greater the threat of severe wildfires in a fire season that has continued through the winter. More money — $4 billion — has been spent fighting wildfires in California over the past decade than in any other state. Just last week, a fire in the Los Angeles suburb of Glendora burned homes in a region that was still under a fire weather watch on Thursday morning.

Gov. Jerry Brown declared a drought emergency last week, calling for cities to cut their water use by 20 percent. Though that motivated some cities to start restricting water use; other cities are encouraging voluntary water conservation because they believe their water supplies will remain secure through at least the remainder of 2014.

“The pockets where you’re seeing the most urgent action are the folks that have maybe a single source of supply that is already impacted by the drought,” said Lisa Lien-Mager, spokeswoman for the Association of California Water Agencies. “It’s very much not a one-size-fits-all scenario.”

The drought is taking its most severe toll on Sacramento’s water supply, which relies heavily on the desiccated Folsom Reservoir and the American River, both in an area that haven’t seen significant rainfall in more than 45 days, she said. Folsom Reservoir is less than 18 percent full. 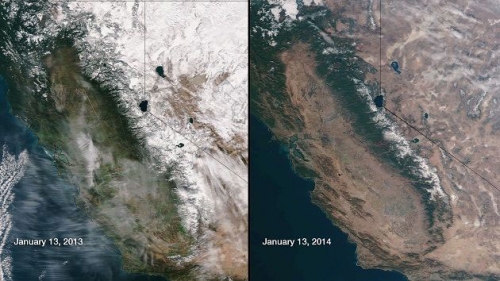 Though city officials say they’re not facing an immediate water supply emergency, the Sacramento City Council voted Jan. 15 to require residents to reduce their water consumption by 20 percent to help preserve the American River. Reductions will be achieved mainly through lawn watering restrictions and a public education campaign encouraging residents to take short showers, fix leaky toilets and turn the water off while brushing teeth.

“It’s easy for folks to think the next rainfall is going to be a windfall, and we’re done,” said Sacramento Department of Utilities spokeswoman Jessica Hess. “We need to really think about how we change our lifestyle in the way we live to accommodate water shortages today, but (also) in the future, down the line.”

Farther west, the city of San Francisco hasn’t decided how it will respond to the state’s drought emergency. San Francisco Water Power and Sewer, which last asked residents to cut water consumption in 2007, issued a statement after last Friday’s emergency declaration saying that the city’s public utilities commission will decide in the “coming weeks” what water conservation measures, if any, will be necessary in the city.

Reservoir storage in the Hetch Hetchy Regional Water System, which provides drinking water to more than 2.6 million people in four counties around San Francisco, including the city itself, is currently at about 70 percent of capacity.

Other water districts, including the East Bay Municipal Utilities District, which provides water for Oakland, Berkeley and other East Bay area cities, are holding out hope for springtime rains.

“The board of directors won’t declare any decisions until the springtime,” Abby Figueroa, EBMUD spokeswoman, said. “That’s because they like to wait until the winter ends. January and February are the rainiest parts of the year for us.”

The district’s reservoirs in the Mokelumne River watershed in the Sierra Nevada are in fair condition, ranging from 51 percent full to 85 percent full. Those lakes are coasting on the heavy precipitation that filled them in 2012, but precipitation since last summer in that basin has only been 22 percent of average. The district plans to declare a drought emergency if the reservoirs there aren’t replenished by the spring.

Figueroa said the region learned a lesson from a devastating 1977 drought, which forced the district to find ways to encourage water conservation and reduce water demand. The district asked residents to cut 15 percent of their water consumption in 2008, and today, they’ve slashed their consumption by 17 percent.

Los Angeles, which gets about half of its water from the Colorado River and about a third from the eastern Sierra Nevada, is relying on its 2009 mandatory water conservation measures for its response to the current drought emergency and asking residents to find ways to save even more. After the conservation ordinance was passed, Los Angeles reduced daily per capita water consumption to 123 gallons by 2012, down from 158 gallons in 2002. By contrast, New Yorkers used 127 gallons of water per capita in 2010.

While Los Angeles and other cities look for ways to cut back on water use, San Diego declared after Brown’s drought emergency announcement that its water supplies are secure for the foreseeable future and there is no reason for the city to implement restrictions.

The San Diego County Water Authority, which supplies water to the city, imports about 85 percent of its water, mainly from the Colorado River, and has an adequate water supply in its reservoirs and guaranteed water transfer arrangements with farmers in the Imperial Valley to the east.

“We are better off because of the investments we have made to diversify our supply portfolio, and we’re better off because of our residents having conserved water over the past few years,” Dana Friehauf, SDCWA acting water resources manager, said. “If demands don’t stay down low or we have another dry year, then in 2015, we may have to take additional steps in order to manage the shortage.”

The SDCWA is touting reductions in its residents’ water consumption over the years as another reason more restrictions aren’t yet necessary. Per capita water consumption in San Diego County has dropped by 27 percent since 2007, and the county’s cities and towns are on track to meet a state mandate calling for a 20 percent water use reduction by 2020, according to a SDCWA statement.

The varying responses to the drought are evidence that dealing and planning for drought has become a part of daily life in California, but the emergency isn’t enough to dash hopes that the big rains will come, Lien-Mager said.

“This is a very historic weather pattern, but you know, it can change. A March miracle can come along,” she said. “It could still happen. You can’t rely on that, you can’t expect that to happen.”