A wildfire exploded outside Los Angeles Thursday as record temperatures spread across California, where drought conditions are escalating as the state comes off its driest year on record.

A new update to the U.S. Drought Monitor shows that severe drought, the second-worst drought category, has spread across 62.7 percent of California as of Tuesday. The previous week, severe drought was only affecting 27.6 percent of the state. 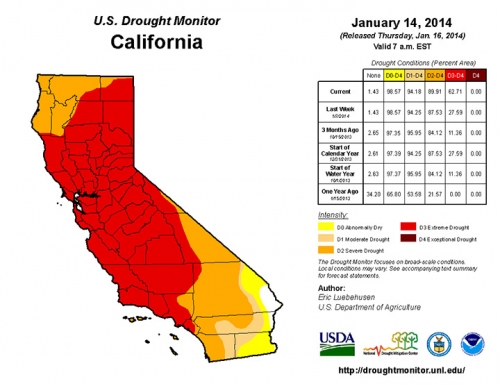 A map showing the extent of drought in California as of January 14.
Click the image enlarge.
Credit: U.S. Drought Monitor

California recorded only 7.38 inches of precipitation statewide in 2013, well below the state average of 22.51 inches. That trend is continuing.

A persistent ridge of high pressure, which set up last year and hasn't moved much since then, has been deflecting the storms that normally roll across the state from mid-October through April. Those storms are hitting areas to the north and south, but missing California. The enduring nature of the ridge has led Daniel Swain, a writer at the Weather West blog, to nickname it the “Ridiculously Resilient Ridge.”

“The precipitation has not developed (this season),” Brian Fuchs, a climatologist at the National Drought Mitigation Center, said. “We definitely are starting to see more of those impacts on the ground as far as the drought in that area.”

Much of the state has received less than 5 percent of its normal precipitation over the last month. As a result, snowpack, which provides water for much of the state during the dry season, this year is paltry. Data from the California Department of Water Resources show that snow-water equivalent, a measure of the water content of snow, for is just 8 percent of normal to-date in the northern Sierra Nevada range. The central Sierra range stands at 16 percent of normal to-date and the northern Sierra range is at 22 percent. 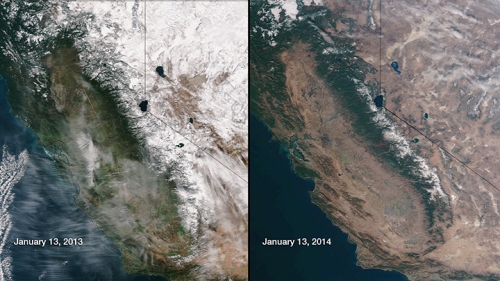 Reservoirs are facing shortages, too. Shasta Lake and Oroville, California’s two largest reservoirs, are at only 36 percent capacity.

San Francisco set an all-time record for January on Wednesday, with temperatures topping out at 73°F. That tops the previous record set in 1948 and tied in 2009 by a degree. Other cities in the Bay Area also set daily records, including Santa Cruz, Oakland, and Napa.

Los Angeles has also been no stranger to drought. The city followed California’s lead last year by having its driest year on record. Just 3.6 inches of rain fell. In 2012, the city was also on the drier side, receiving just 56 percent of its annual average rainfall.

These conditions coupled with gusty Santa Ana winds set the stage for the wildfire that broke out Thursday in Glendora, a suburb of Los Angeles. The fire, which was likely caused by an errant campfire, spread rapidly through the hills. As of 10 a.m. local time Thursday, it had burned over 1,700 acres.

Fuchs said that while this fire was not caused specifically by the drought, its behavior was in line with what to expect during a drought. 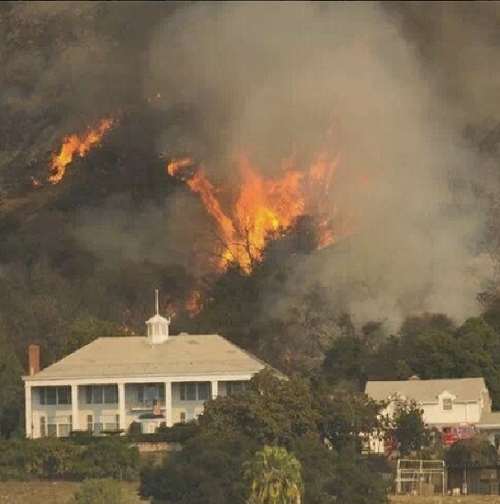 “You can see an amplified number or even more intense fires just because of how dry it is,” he said. “When you have fire events during drought, they typically can develop more rapidly.”

Bailey said in the U.S. there are 46 million homes in communities that face a high risk from wildfires. As more people move to wildfire-prone areas, those numbers are only likely to increase.

In Los Angeles County, future changes in wildfire activity due to climate change are mixed according to tools designed by the California Energy Commisssion. However, across the western U.S., drier and warmer conditions are expected to lead to more severe and intense wildfires in the future.

Overall, this winter looks to only increase drought conditions in the state. The Climate Prediction Center is forecasting above normal chances of warmer temperatures and little precipitation in California and its drought-stricken neighbor, Nevada as well as Arizona, and parts of New Mexico.

“The deck is stacked unless we see a big reverse of weather pattern, there just isn’t anything to bring relief into the region,” Fuchs said.