In New England, what’s old is new again, especially when it comes to the kind of fuel people use to heat their homes.

As prices of propane and heating oil have risen in recent years, residents in all Northeastern states are increasingly turning to wood as their primary source of home heating fuel, according to a U.S. Energy Information Administration (EIA) report released this week. 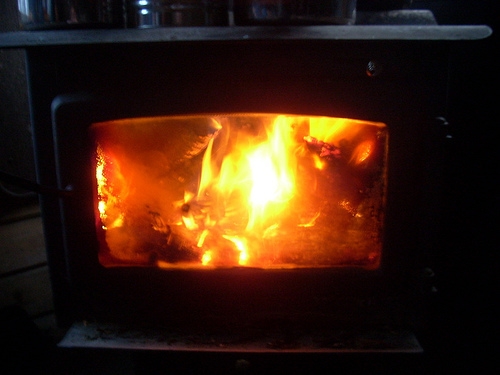 There’s a problem with that, though: Black carbon, or emissions of soot from burning wood, is a major heat-trapping pollutant contributing to global warming. But the actual effect of more people burning wood for heating is very complicated.

People are seeking cheaper alternatives to expensive fossil fuels to heat their homes, and they’re mostly turning to wood logs, though researchers are seeing an uptick in the use of wood pellets, too, said Chip Berry, EIA manager of the agency’s Residential Energy Consumption Survey, from which the wood burning data was gathered.

Heating oil prices have risen slightly over the past year, but residential propane prices have been volatile this winter. Heating oil, which is most commonly used in the Northeast and is second only to natural gas as a heating fuel in the region, cost just more than 1 cent higher than it was a year ago as of March 12, running about $4.20 per gallon, EIA data show.

Prices for propane, which is less commonly used in the Northeast than heating oil, are dramatically higher. A year ago, propane cost about $2.35 per gallon. Last week, it was nearly a dollar more at $3.17 per gallon, that after peaking at $4 in January, EIA data show.

All of the nine New England and Mid-Atlantic states together saw at least a 50 percent increase in the number of homes that use wood as their primary heating fuel between 2005 and 2012, EIA data show.

Most of the wood used for heating is burned in wood stoves, and fireplaces are commonly used as a secondary heating source, according to the EIA, but Berry said there is no data on the source of the wood used. 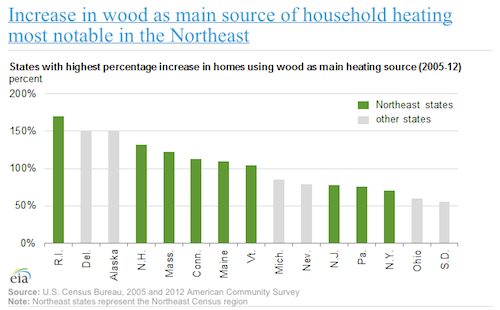 Who is most likely to burn wood as a primary heating fuel? Those with a household income of more than $100,000, according to EIA data. Though the affluent are more likely to use wood for heating, low income homes burning wood are likely to use more wood on average than more affluent households.

The effect more people burning wood for heating will have on the climate is extremely complex, said Drew Shindell, a National Aeronautics and Space Administration climate researcher who co-authored 2012 study on how short-lived climate pollutants, including soot and methane, can be reduced globally.

“If you have emissions from wood (burning) in the Northeast, it's pretty easy for the pollution to get carried farther up to the north, all the way up into the Arctic and into Greenland,” Shindell said. “When the black carbon comes down on the snow and ice, it really darkens it.”

Heating oil and propane burn more cleanly than wood. Soot from wood stoves blowing into the Arctic can lead to more warming there in the short term as the darkened ice absorbs more heat.

But over the long term, the effect of more wood smoke emissions is more complicated because the wood is replacing the use of propane, heating oil and other fossil fuels, Shindell said.

“There's a tradeoff to be made,” he said. “It really depends on how clean the wood-burning stoves are and what source of power they're replacing.

The EPA already has regulations for wood heaters, but they apply to older kinds of wood stoves that lack new emissions-reduction technology. The new rules would require improved low-emissions technology for many new woodstoves. No decision has been made on the proposed new regulations.