Methane leaks are common in the U.S. natural gas production and distribution system, but they do not fully negate the climate benefits of using natural gas to produce electricity over burning coal for electric power, according to a new Stanford University analysis.

The paper, to be published Friday in the journal Science, concludes that U.S. Environmental Protection Agency inventories underestimate methane emissions from natural gas production, but hydraulic fracturing — a process of fracturing underground rock to release natural gas into wells — is not likely the largest source of methane leaks. The study says better science needs to be done to determine where the methane emissions are coming from and how to stop them. 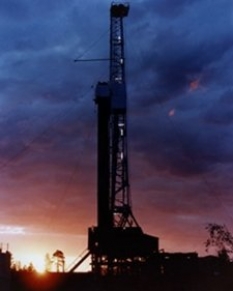 Myriad studies have been done showing that natural gas production is a source of excess methane emissions, sparking concern among scientists that natural gas may not be a “bridge fuel” between coal and renewables because the affect natural gas has on climate change may have been underestimated. Methane is about 100 times as potent as carbon dioxide as a greenhouse gas soon after being released into the atmosphere, and about 34 times as potent as CO2 after about 100 years in the atmosphere.

The Stanford-led paper, which reviewed more than 200 studies examining emissions from natural gas production, paints a complicated picture of what we know about methane emissions, and whether it makes sense to replace coal-fired power plants with those running on natural gas.

Brandt and his team reviewed studies that measured methane emissions both on the ground near natural gas production facilities and in the atmosphere, where the studies found methane emissions to be between 25 and 75 percent higher than EPA estimates. But EPA estimates, which the agency reduced by 30 percent last year, exclude natural sources of methane and emissions suspected to be from abandoned oil and gas wells because the amount of methane those sources emit are unknown. The EPA calculates methane emissions by counting the number of cows, oil and gas wells and oil refineries in a region, then estimates total emissions based on how much methane each of those soruces is expected to emit.

The Stanford-led study was unable to calculate total methane leakage from the energy industry, making it difficult to determine the exact climate benefit of using natural gas over coal for electric power generation, Brandt said.

Over a 100-year period, the emission estimates from Brandt’s team suggest that the climate impact of burning natural gas is less than that of coal. The team examined previously published  “lifecycle assessments” of coal and natural gas, which analyze the overall climate impacts associated with each fossil fuel. Most lifecycle assessments use EPA greenhouse gas inventories to conclude that natural gas has less of an aggravating effect on climate change than coal.

But the paper concludes that even though official EPA natural gas emissions inventories underestimate methane in the atmosphere, producing and burning natural gas is still better for the climate than coal over a 100-year period.

Other studies have refuted the idea natural gas is a “bridge fuel” that will allow the U.S. to transition from greenhouse gas-rich coal to clean renewable energy sources because leaks associated with producing and burning natural gas may exacerbate climate change too much in the short term to avoid looking for cleaner fuels.

The paper also concludes that, while switching from coal to natural gas for electic power generation is good for the climate, using natural gas for buses may not be. Brandt said that given the leakage rate in the natural gas production and distribution system, there does not appear to be a climate benefit to switching transportation fuel to natural gas from diesel, which is a highly efficient fuel.

“You need a stricter leakage standard in order to benefit (from natural gas),” Brandt siad.

Cornell University civil and environmental engineering professor Anthony Ingraffea, co-author of a 2011 Cornell study showing that leaking emissions from natural gas production are higher than previously thought, said he disagrees with Brandt's conclusion that natural gas is more beneficial for the climate than coal over the span of a century. 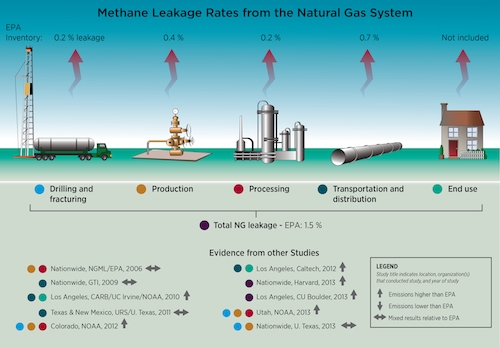 “Once again, there is a stubborn use of the 100-year impact of methane on global warming, a factor about 30 times that of CO2,” Ingraffea said. “All the current consensus on climate science, summarized in IPCC AR 5 (the Intergovernmental Panel on Climate Change Assessment Report 5), says that we only have about 20-30 years before we reach the warning zone of temperature rise that could lead to climate tipping points. And we can’t wait 20-30 years to start decreasing CO2 equivalent emissions from fossil fuels.”

He said there is no scientific justification to use the 100-year time window.

The Brandt team’s paper finds experiments measuring emissions from specific sources show that most methane leakage comes from a handful of “super-emitters,” the locations of which are generally unknown, but are likely somewhere in the natural gas processing and production system.

Studies that have shown high methane leakage rates are not likely representative of the entire natural gas industry, the study says.

Hydraulic fracturing, or “fracking,” is a controversial method of injecting millions of gallons of water, sand and chemicals underground at high pressure, cracking open crude oil- and natural gas-bearing rock formations and releasing the hydrocarbons to a well at the surface. Advances in fracking technology, along with horizontal and directional drilling techniques, are responsible for current shale oil and gas boom across the U.S., but the technique is widely feared to contaminate surface and groundwater and emit unquantified amounts of greenhouse gases.

Brandt said fracking is unlikely to be the largest source of methane emissions because high methane leakage rates were recorded before the current fracking boom began within the past decade.

Paper co-author and Massachusetts Institute of Technology lecturer Francis O’Sullivan said that methane emissions from fracking are still significant — about 1 teragram per year in the U.S. — but those emissions account for only a small portion of overall natural gas methane emissions.

Echoing the concerns of scientists speaking at the American Geophysical Union Fall Meeting in December in San Francisco, Brandt said there are numerous unknowns about how and where the natural gas production and distribution system is leaking methane. The Stanford study calls for better research to be conducted so that policymakers can gain a greater understanding of how producing and burning natural gas affects climate change.

“Fundamentally, you can’t access these sites without permission,” he said.

The paper, “Methane Leaks from North American Natural Gas Systems,” will be published Friday in the journal Science.