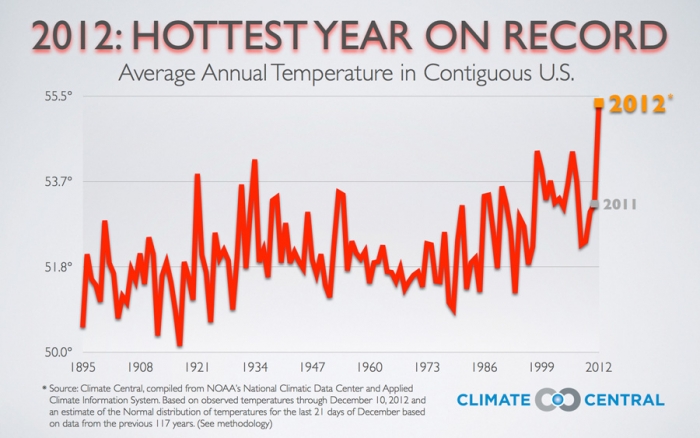 Global warming is directly linked to only a few weather events and climate trends. One of them, however, is warming itself, which could make 2012 a watershed climate change year in the U.S. More than superstorms, wildfires, and devastating drought, this year’s record-smashing spring and summer heat waves, with their melted airport runways and warped steel rail lines, are more evidence that climate change is real.

Last week NOAA announced that 2012 was “likely” to be the warmest year on record in the 48 states, based on temperatures through November. At some point, however, likelihood turns into certainty. Does a warm December push the nation to the point where it is impossible for 2012 to be anything but the warmest year ever recorded in the U.S.?

To answer that question Climate Central did the math, and the results are in. 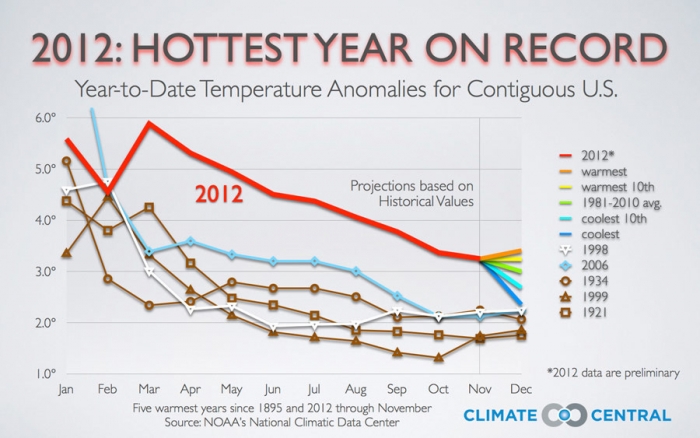 The five warmest years since 1895 and then 2012 through November.
Click image to enlarge.
Click here for a zoomed in view of Aug.-Dec.

By taking the top spot as the hottest year in the U.S., 2012 pushes 1998 into second place, followed by 2006, 1934 and 1999. In line with the global warming trend spurred by steadily rising carbon emissions, seven of the top 10 warmest years in the 48 states have occurred in the past 15 years.

Like so much recent record-breaking weather, 2012 isn’t just going to break the previous record, 2012 is looking to smash it, by more than 1°F. Climate Central projects the 2012 average temperature for the continental U.S. at 55.34°F compared to the previous record set in 1998 of 54.32°F. For perspective, 1°F is one quarter of the difference between the coldest and warmest years ever recorded in the continental U.S.

Exactly how cold would it need to be not to break the record? Temperatures would have to average 14.76°F across the continent for the rest of December — a holiday season colder than any ever recorded.

But that is not going to happen. So far this December the mean temperature in the contiguous U.S. has been 44.13°F. The average temperature for 117 years of previous Decembers is 33.08°F. 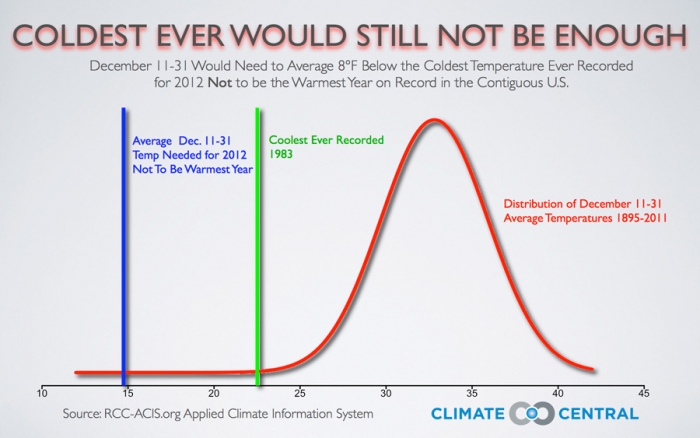 Things are a bit different at the state level, where the heat was extreme, but far from every state will set the record. Fully two-thirds of the lower 48 states recorded their first-, second- or third-hottest years through November, and 43 states had one of their top 10 warmest years ever recorded. Even the coolest state, Washington, had a far warmer-than average year to date.

But while 17 states had recorded their warmest year to date, just 12 have better than a 50-50 chance of continuing this warm weather through the year and having the warmest year on record. (State odds will change as we move toward the end of the year.)

Record-shattering heat has been the norm all year. June-through-August 2012 was just two-tenths of a degree cooler than the Dust Bowl summer of 1936, and July of this year was the hottest month ever recorded in U.S. history.

This scorching summer followed on the heels of a remarkably warm spring in most of the country. March 2012 was the warmest March in U.S. history by a wide margin. In communities across the upper Midwest, daily low temperatures routinely broke previous high temperature records, and daily high records were repeatedly smashed by 20 degrees or more.