As greenhouse gas pollution reshapes the invisible mosaic of seawater chemicals washing over Australia’s Great Barrier Reef, corals there are being locked in escalating conflicts with each other for survival.

A modeling-based study by Australian government scientists has tracked ocean acidification for the first time through all of the thousands of reefs comprising the psychedelic ecosystem, which is home to fish, sharks, dolphins and dugongs. The study was published Tuesday in Nature Communications. 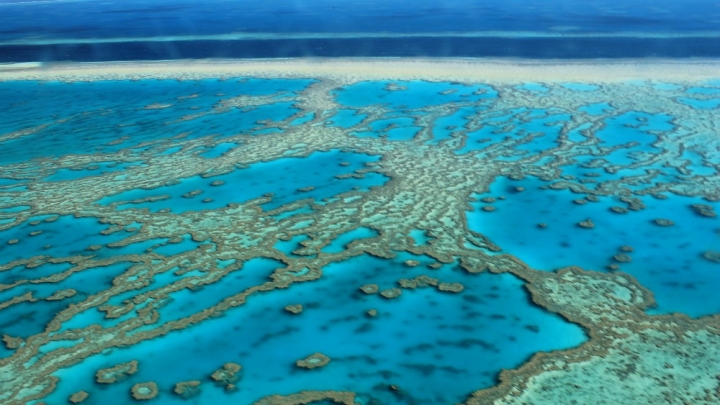 Ocean acidification is caused by carbon dioxide pollution and it’s associated with a decline in calcium carbonate, which coral use to make their tough sheaths. That’s weakening coral reefs around the world, making them more vulnerable to impacts of ocean warming and water pollution.

The new findings suggest that the World Heritage site might not be able to withstand one of the more profound but lesser-known impacts of climate change.

“While temperature is the near-term threat, acidification erodes the ability of corals and other calcifiers to keep pace with increasing numbers of extreme events,” said Ove Hoegh-Guldberg, a marine science professor at the University of Queensland. He was not involved with the new study, which he described as solid. “The result is less and less coral.”

Ocean pH has declined to 8.1 from 8.2 since the Industrial Revolution, and while those are just numbers to most of us, “reef development is thought to cease at pH 7.8,” said David Wachenfeld, director of reef recovery at the Great Barrier Reef Marine Park Authority, a government agency. He wasn’t involved with the study.

The new findings show that acidification inside the system of reefs is even worse than in the open oceans. That’s because corals in the outer reefs slurp up much of the calcium carbonate before it can reach the center. 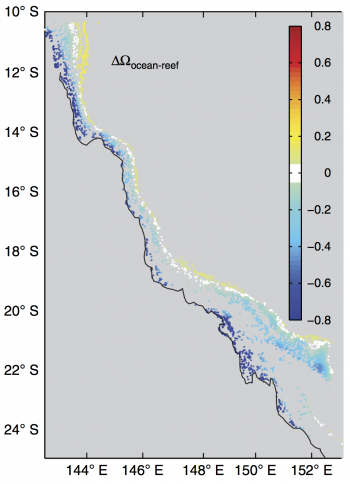 “It’s important that we understand how and where climate change, including ocean acidification, will impact the reef,” Wachenfeld said in an email. “It potentially allows us to take more targeted actions to build its resilience.”

By combining data from research sites with models, the researchers peered into the chemistry of the Great Barrier Reef, Earth’s largest living structure, which stretches nearly 1,500 miles.

“One of the things about the Great Barrier Reef is that there’s 3,500 reefs,” said Mathieu Mongin, a marine biogeochemical modeler at the Commonwealth Scientific and Industrial Research Organisation (CSIRO) who led the new study. “We can’t measure it all. So we have to use models.”

The researchers discovered heavy salinity impacts in the heart of the system, with outer reefs gobbling up the declining supplies of calcium carbonate as it washes in from the Coral Sea.

The scientists concluded in the paper that their findings, combined with projected ongoing warming, show that even if rates of climate pollution are reigned in, that “may not be sufficient to avoid significant impacts” of acidification on coral reef regeneration.

That would lead to “potential losses in coral cover, ecosystem biodiversity and resilience,” the scientists wrote.

Although the findings were troubling, they’re being welcomed by other scientists.

“It’s always alarming to hear that things are going to get worse,” said Paul Marshall, a private industry scientist who previously led high-profile research into climate change’s impacts on the Great Barrier Reef. “But the paper provides insight that could be turned into action that can help build the resilience of reefs to these larger global stresses.”

The data provided a snapshot of current conditions. Next, the CSIRO scientists plans to model the future toll of worsening acidification throughout the Great Barrier Reef.

The future of the group that produced the paper is in question, however, making it unclear whether its plans for projecting future conditions at the reefs will move forward. 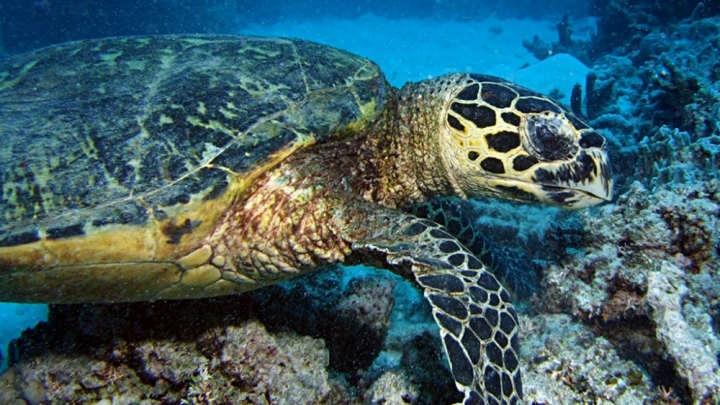 Endangered hawksbill turtles are among seven species of marine turtles that can be found in the Great Barrier Reef.
Credit: Geir Friestad/Flickr

The Australian government has announced that it plans to cut 90 or more jobs from CSIRO’s ocean and atmosphere division, leaving as few as 30 staff remaining, though few details have been finalized or announced.

What’s clear, though, is that the future of the Great Barrier Reef will be shaped by how rapidly the world can transition from fossil fuels to cleaner sources of energy, which was the overarching goal of a United Nations climate pact agreed to in Paris in December.

Like other natural systems, the fate of the world’s reefs may be tied to the success of that treaty.

“This latest research serves to underline the fact that the single biggest thing we can do to protect the Reef for the future is to greatly reduce greenhouse gas emissions as soon as possible,” Wachenfeld said.