A bill being drafted in the House could potentially undermine the climate science research activities and the oceans programs of the National Oceanic and Atmospheric Administration (NOAA). It also would open up the weather satellite sector, which has been a troubled area for NOAA in recent years, to more privatization. 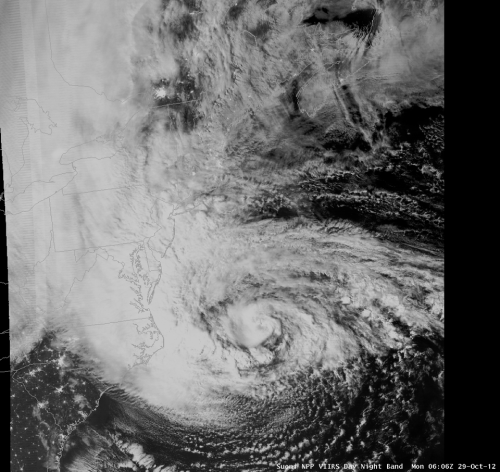 This image from the Suomi-NPP weather satellite jointly developed by NOAA and NASA shows Hurricane Sandy moving up the eastern seaboard on Oct. 29, 2012.
Credit: NOAA/NASA.

The bill, known as the “Weather Forecasting Improvement Act,” would put more emphasis on research and development of new weather forecasting capabilities for anticipating near-term, high-impact events, such as tornadoes and hurricanes, at the possible expense of two of the agency’s other long-standing areas of focus — climate and marine science.

The bill was the subject of a May 23 hearing in the House Science Subcommittee on the Environment. It has not yet been formally introduced, and is largely being drafted by Republicans on the subcommittee, which has jurisidiction over NOAA’s National Weather Service, according to several close observers of the legislation.

Representatives of NOAA and the academic research community were absent from the hearing, which featured members of two private sector weather companies — AccuWeather and GeoOptics. In the past, AccuWeather has backed legislation to open more of NOAA’s activities to private competition.

NOAA said it was invited to the hearing but did not receive sufficient advanced notice to allow it to formulate a response to the bill and also clear testimony through the White House. The agency has asked for an opportunity to testify at a subsequent hearing. The subcommittee’s Democratic members requested a second hearing to give NOAA officials a chance to testify, and to bring in representatives of the academic research community, as well.

The hearing came largely in response to news coverage of the increasing gap between the accuracy of NOAA’s main weather forecasting model, known as the Global Forecast System (GFS) and a model run by the European Center for Medium-Range Weather Forecasts, or ECMWF. For example, the ECMWF model correctly projected Hurricane Sandy’s devastating left turn into the New Jersey coast about a week in advance, whereas the GFS model didn’t project that outcome until the storm was closer to the East Coast.

To try to narrow the modeling gap, the bill would direct NOAA’s Office of Oceanic and Atmospheric Research to undertake a research program to hone forecast accuracy, “placing priority on developing more accurate and timely warnings and forecasts of high-impact weather events that endanger life and property.” The program would include a technology transfer component to ensure that insights and tools discovered on the research side of NOAA also benefit the operational side of the agency.

Currently, NOAA relies on many partnerships with the academic community to research new technology and provide new scientific insights, and has long had difficulty translating research conducted in one part of the multifaceted agency into successful programs in another part.

“The bill is an attempt to improve the role research plays in driving science into operations, which is a good concept, but NOAA does not have a stellar record when it comes to executing these transitions,” said Scott Rayder, senior advisor to the president of the University Corporation for Atmospheric Research in Boulder, Colo., a consortium which operates the National Center for Atmospheric Research and represents 104 research universities.

The draft bill would also require the NOAA chief information officer to issue a plan for allocating and developing high-performance computing capabilities to support improvements in the agency’s weather prediction models. Currently, NOAA lags behind the European Center and other forecasting centers worldwide when it comes to computing power, which has been pinpointed as a major contributing factor to the Europeans’ lead in weather modeling, but money recently appropriated by Congress as part of the supplemental bill in response to Hurricane Sandy is being used to address that.

As National Weather Service director Louis Uccellini told Climate Central earlier this month, the infusion of funding will allow the agency to triple its computing capacity. ““To go from 213 to 1,950 terraflops is the largest increase in computing capacity that we’ve ever had,” Uccellini said.

The draft bill also requires NOAA’s chief information officer to identify opportunities to “reallocate advanced-computing resources from lower-priority uses to improve operational weather prediction.” This section of the bill could result in a reduction in resources for NOAA’s climate research programs. 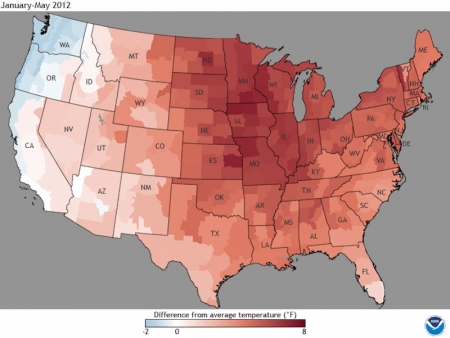 NOAA is responsible for monitoring the U.S. and global climate system, producing a steady stream of reports to the nation. This graphic shows the January-May temperatures compared to average in the lower 48 states, when temperatures were the hottest on record.
Credit: NOAA/NCDC.

“In 2012, NOAA barely spent one-third of the resources on weather research as it did on climate research,” he said.

According to President Obama's Fiscal Year 2014 budget, NOAA would comprise the second-largest component of the U.S. Global Change Research Program, coming in second behind NASA. The agency currently issues climate projections utilizing cutting-edge computer models, and monitors the global climate system. It is also the home of the official climate data of the U.S., which is maintained at its National Climatic Data Center in Asheville, N.C.

NOAA's draft five-year research plan also contains a mix of weather and climate research programs aimed at making America more resilient in the face of extreme weather events, some of which are already becoming more intense and frequent due, in part, to manmade climate change.

Marshall Shepherd, a professor at the University of Georgia and president of the American Meteorological Society, told Climate Central that it is essential to maintain NOAA’s leadership in climate research while also improving weather forecasting. “I am fully supportive of making the U.S. the best weather modelers in the world, but we must also maintain a viable short (6-month to 2-year) and long-term climate modeling capacity,” he said in an email. “It would be short-sighted to dismantle that world-class capability.”

Mary Glackin, a former top administrator at NOAA now working at the American Meteorological Society, also said it would be shortsighted to elevate weather forecasting needs at the expense of climate prediction. Of the draft bill, she said, “It places weather at the forefront to potentially the exclusion to other earth science research work that may be done at NOAA.”

Glackin said that is flawed because there is a “spectrum of continuity” between weather and climate forecasts, and people — and most especially businesses — need information at different time scales.

The legislation only concerns NOAA’s atmospheric sciences programs, despite the many other federal agencies that conduct such research, including the Energy Department and the National Science Foundation. ““They’re trying to address this weather problem by only looking at NOAA, and I think that’s flawed. They have to look at federal investments across the board,” Glackin said.

The bill also seeks to address another looming gap, this one concerning weather satellites. The next generation of federal weather satellites are running years behind schedule and billions of dollars over budget, leading to calls to reform the satellite procurement system, and the bill responds to that need by allowing the government to purchase weather data from private weather satellite operators. 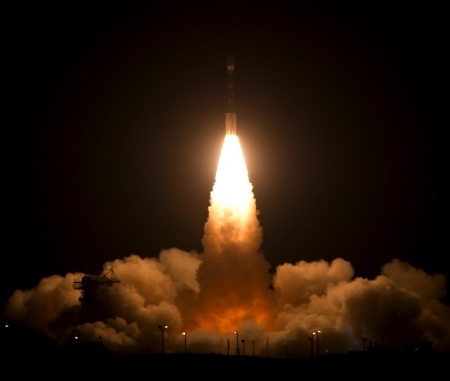 The launch of the Suomi National Polar-orbiting Partnership spacecraft on Oct. 28, 2011. This is the most up-to-date polar-orbiting satellite providing data to NOAA weather forecasters and researchers.
Credit: NASA.

In allowing for such private sector data purchases, the legislation could boost a burgeoning private weather satellite industry while altering some of the satellite systems currently under development. Currently, the government works with the private sector to build and launch satellites, and NOAA and NASA operate them once in orbit.

NOAA has said that starting in 2017, there is likely to be a year-long gap in polar satellite coverage between the end of the design lifetime of the newest  polar-orbiting satellite, and the launch of the next one. Just last week one of NOAA’s geostationary weather satellites mysteriously malfunctioned, forcing a backup satellite to take over.

GeoOptics, whose CEO, Conrad Lautenbacher, led NOAA during the Bush administration, is seeking to launch 24 or more satellites into low Earth orbit during the next eight years, and hopes to sell its environmental data to the government. Jon Kirchner, president and chief operating officer of GeoOptics, testified at the hearing along with Barry Myers, the co-founder of AccuWeather.

A caveat to such arrangements, Glackin said, is that even when the government buys data from a third-party provider, the risk still is borne by the government. In the event that the private company fails to deliver the data as expected, the government would then be responsible for that failure in most instances. “You should never lose sight that even if you’re buying data you’re not really transferring risk from the federal government.”

In addition, Glackin said that the public receives data from publicly owned satellites free of charge, but most private companies won’t be willing to just give away their data. For now, that data is available to the public, to businesses and to other countries, too. That could become a major sticking point in any contract negotiations. “If you’re going to use federal taxpayers’ dollars to procure it, it should be freely available to those taxpayers,” Glackin said. “The devil is in the details in these things.”