Bill to Shift NOAA Resources to Weather Marches On

A House bill that would mandate the nation’s top weather and climate agency shift its priorities more toward short-term weather forecasting has sped its way through the legislative process. The House Science Committee is expected to consider it in the next few weeks.

The bill is aimed at changing how the National Oceanic and Atmospheric Administration (NOAA) prioritizes its missions of weather, climate and ocean science. Critics of the bill say that prioritization will shortchange long-term climate research in favor of improving forecasts of extreme weather. 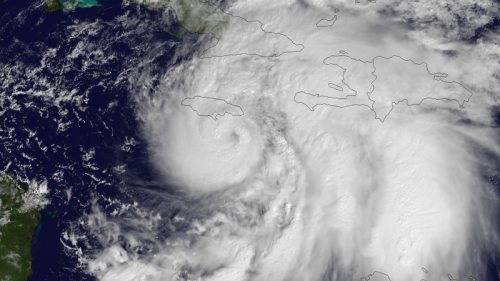 It is sponsored by Rep. Jim Bridenstine, a Republican from Oklahoma, who said the recent devastation of extreme weather in his state — including the tragic Moore tornadoes and a crippling drought — prompted him to push for better forecasting tools.

Recent severe events such as Hurricane Sandy have highlighted deficiencies in the current top U.S. weather model, known as the Global Forecast System, but many in the weather and climate community argue that narrowing the agency’s focus would be counter-productive because climate science research and weather modeling work hand-in-hand to understand what the weather might have in store for us at various time scales.

NOAA has objected to the bill because it draws rigid lines between those two priorities and also leaves out other key areas entirely, such as social science research about effectively communicating severe weather warnings.

The bill, known as the “Weather Forecasting Improvement Act,” was the subject of two hearings in the House Science Subcommittee on the Environment, which approved the bill by voice vote on July 9.

At the July 9 markup, Democrats raised objections to the speed with which the bill was progressing, saying there has not been enough time to get input from the weather and climate community.

The bill that emerged from the subcommittee markup contains a provision that would require the NOAA administrator to make “weather-related activities” the top priority for planning in all NOAA “line offices,” including the Office of Atmospheric and Oceanic Research, which funds a large portfolio of the agency’s research programs.

Kathryn Sullivan, the acting NOAA director, said drawing a fine line between weather and climate forecasting would be shortsighted.

“The underlying intent of the bill, of course, is one that we embrace,” Sullivan said at a press conference at an Arctic climate conference in Washington on Wednesday. But, she said, “There are a number of provisions as currently drafted in it that we find too narrow and not consistent with how the weather enterprise works.”

According to NOAA’s definition, weather forecasts extend to two weeks in advance, while climate forecasts cover time spans beyond two weeks. Such climate forecasts include everything from seasonal drought outlooks, which are relied upon by water managers, wildfire firefighting agencies, and farmers in particular, to long-range climate change projections that provide insight into how the planet is likely to respond to increasing amounts of manmade greenhouse gases. 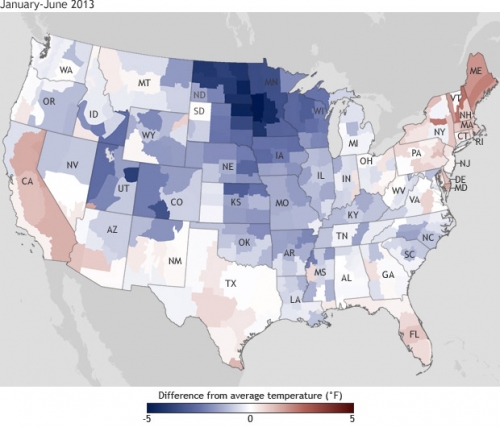 NOAA is responsible for monitoring the U.S. and global climate system, producing a steady stream of reports to the nation. This graphic shows the January-June temperatures compared to average in the lower 48 states.
Credit: NOAA/NCDC

The agency currently issues climate projections utilizing cutting-edge computer models, and monitors the global climate system. It is also the home of the official climate data of the U.S., which is maintained at its National Climatic Data Center in Asheville, N.C.

Sullivan testified before the subcommittee on June 26, and cautioned lawmakers against shortchanging climate and ocean research by elevating weather research to the top of the agency’s priority list.

“The links among weather, climate variability, and climate change are pervasive and important to understand in order to improve weather prediction,” she said. “We caution against actions to increase one important mission area to the detriment of the NOAA research programs in climate or ocean science. In the long term, this would weaken and undermine NOAA's weather forecasting enterprise in that weather is closely linked to the state of the ocean and variations in climate.”

William Gail, the chief technology officer at the Global Weather Corporation in Boulder, Colo., told Climate Central that Congress needs to recognize the benefits to be gained by improving weather, ocean, and climate programs together, rather than picking one winner out of the three. “. . . Drawing artificial lines between weather and climate to reallocate funding is a slippery slope that does not really help national interests,” he said in an email message.

The House bill also does not address the important role played by academia in advancing weather and climate knowledge. “The bill's goal of improving weather research is laudable, but it needs to better reflect the reality that the majority of improvements in weather research come from our nation's research universities,” said Scott Rayder, Senior Advisor to the President at the University Corporation for Atmospheric Research, in a statement to Climate Central.

Currently, NOAA relies on many partnerships with the academic community to research new technology and provide new scientific insights, although parts of the agency, including the National Weather Service, have long had difficulty translating research conducted in one part of the multifaceted agency into successful operational programs in another part.

There are some meteorologists, though, who view the bill more positively, and think NOAA has shortchanged weather forecasting infrastructure in recent years in favor of expensive upgrades to climate-related supercomputers, among other purposes. That is an argument made by the prominent weather blogger Cliff Mass, an atmospheric scientist at the University of Washington.

Significantly, the bill would also allow NOAA to purchase weather data from private weather satellite operators, several of which are developing networks of relatively inexpensive satellites for launch into low Earth orbit during the next few years.

Purchasing satellite data from private companies is seen as one way of responding to NOAA’s chronic difficulties in delivering complicated satellite systems on time and on budget, but it also stems from dramatic improvements in satellite technology that now allow private firms to launch huge networks of small satellites at a fraction of the price of the government’s current Earth observing spacecraft.

Currently, the government works with the private sector to build and launch satellites, and NOAA and NASA operate them once in orbit.