These brightly colored bikes and their riders, often seen braving a gauntlet of impatient taxis, city buses and delivery trucks in dense urban areas, are nearly ubiquitous in these cities, granting commuters the freedom to leave their cars behind and get to their destination on their own schedule without having to walk far or take a bus or train. 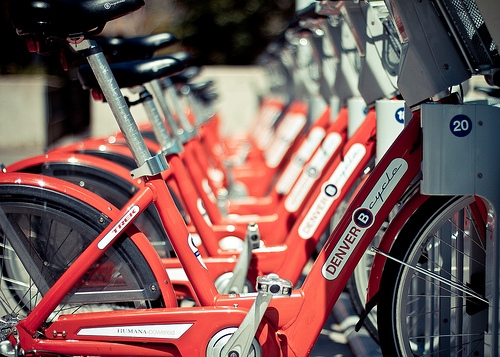 Though bike sharing in other forms has been around for decades, automated electronic bike sharing systems are a recent invention, and they're spreading quickly through the country's biggest cities. New York's CitiBike program, which began in May 2013, counted 8.7 million riders in its first year.

Several things are nearly certain about these modern bike-sharing programs and the more than 25 others across the country: Since 2007 when the United States' first program using automated bike rental stations began in Tulsa, nobody has ever died on a bike-share bike, a statistical oddity to be sure.

And, as more than 23 million trips on these bikes have been taken in that time, all of that pedaling has been great for the climate because each mile someone rides on a bike-share bike instead of driving a car means about 1 pound of carbon dioxide is kept out of the atmosphere, said Susan Shaheen, co-director of the Transportation Sustainability Research Center at the University of California-Berkeley.

But how many people have traded their car for a bike-share bike? That’s where the certainty ends about how bike-sharing programs benefit the climate.

“As of now, for a number of reasons, we have not made estimations on specifically how much CO2 bike sharing keeps out of the atmosphere for any given program,” she said.

Estimating how bike sharing keeps CO2 out of the atmosphere is complicated because every bike-sharing program works differently and collects data differently, Shaheen said. Each system also has residual benefits that could reduce CO2 emissions that may not be factored into calculating bike-sharing’s carbon footprint.

For example, bike sharing could lead to more people using public transit, and then possibly renting a bike to get to work, instead of driving a car for the entire trip, she said.

Nobody knows for sure how many people have decided to rent a bike-share bike instead of driving a car, and there’s no industry standard for how to measure the CO2 emissions that have been avoided by people taking trips on one of those bikes.

A 2012 University of British Columbia study focusing on the climate benefits of bike sharing in Vancouver says numerous factors play into how effective a bike-share system is at reducing emissions. Those include the size of the area the program serves, regional weather, and helmet-wearing requirements. 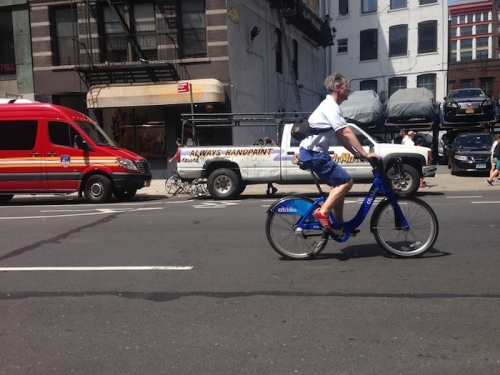 So in Vancouver, where it rains often and riders are required to wear helmets, fewer people may want to rent a bike on a regular basis. But in New York City, where it’s sunnier and where helmets aren’t required for adults, a greater percentage of people may be interested in renting a CitiBike.

In other words, every city is different.

The University of British Columbia study concluded that the climate benefit of bike sharing in Vancouver — Canada’s most densely populated city — was so small that the system would be better marketed as a way for people to get more exercise than reduce CO2 emissions.

“It’s difficult to estimate this number,” said Ralph Buehler, an assistant professor of urban affairs at Virginia Tech and co-author of “City Cycling,” a book published by the Massachusetts Institute of Technology Press on urban cycling and bike-share programs.

Not every system collects CO2 emissions data, but so far researchers have found that for nearly all bike-share systems, the switch from cars to bikes is less than 20 percent, Buehler said.

Data from Nice Ride Minnesota, the bike-sharing program in Minneapolis and St. Paul, show that in 2011, about 53 percent of the program’s riders use a car less often as a result of using the program. That trend for the program will be shown to have continued in 2013 when a new Mineta Transportation Institute report on bike sharing is published soon, Shaheen said

B-Cycle, the company that designs the bike-sharing systems used in Denver and more than 20 other cities across the country, says that on all of its systems combined, 2.1 million bike trips covering 4.5 million miles have been made on its bicycles since 2010, all of which have offset more than 2,948 metric tons of CO2 emissions and saved more than 330,000 gallons of gasoline, B-Cycle spokeswoman Marina Marich said.

Those offset CO2 emissions represent a tiny fraction of the total emissions from many major cities. Los Angeles, for example, emitted 50.3 million metric tons of CO2 in 2007.

Bohnenkamp said there is interest among bike-share program officials to start a trade association that would standardize how data is collected and how each bike-share system’s climate and other benefits are estimated and reported.

Perhaps the biggest way bike sharing helps the climate is that it’s a “gateway drug” to all forms of cycling, Buehler said.

The more people there are cycling on city streets, the more support there is for bike lanes and other cycling infrastructure, he said.

And that means more people want to get on bikes and get out of their carbon-emitting cars.

“They’ve made cycling the cool thing to do,” Buehler said. “Bike share itself is a big advertisement for cycling.”