Big Waves Bust Up Sea Ice, May Be Playing Role in Melt

Big ocean waves whipped up by storms hundreds or even thousands of miles away from Earth’s poles could play a bigger role in breaking up polar sea ice and thus contributing to its melt more than had been thought, a new study suggests. 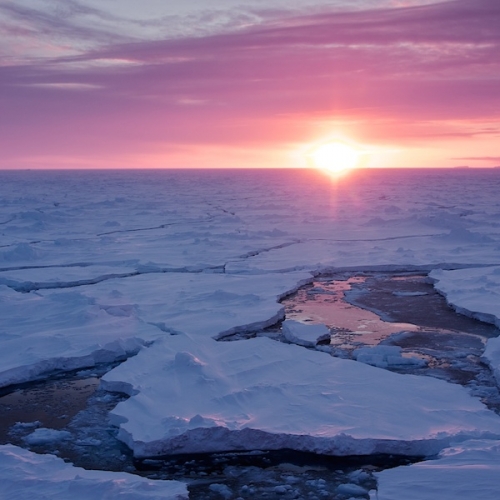 The sun sets over a field of broken sea ice.
Credit: Rob Johnson

The study, detailed in the May 29 issue of the journal Nature, found that these waves penetrate further into the fields of sea ice around Antarctica than current models would suggest, breaking up the ice well away from the edge of the ice. And previous studies have suggested that bigger waves might be more common near the ice edges at both poles as climate change alters wind patterns.

Incorporating this information into models could help scientists better predict the patterns of retreat and expansion seen in the sea ice in both Antarctica and the Arctic — patterns that are at least partly related to the effects of climate change — the researchers say.

Sea ice is, as its name would suggest, frozen ocean water; it differs from icebergs, glaciers and their floating tongues called ice shelves, which all originate on land. Sea ice grows in the winter months, and wanes as summer’s warmth causes it to melt. The amount of ice present can influence the movement of ocean currents — on average, about 9.7 million square miles of the ocean is covered with sea ice, according to the U.S. National Snow and Ice Data Center (NSIDC).

Warming in the Arctic, which is progressing at a faster rate than for the planet as a whole, has fueled steep reductions in sea ice, causing it to both thin and retreat. In Antarctica, the picture has been more complicated, with some areas seeing retreat and others sea ice growth, which is potentially linked to the changes in atmospheric wind patterns that the ozone hole has caused. While models have caught the long-term trends in sea ice extent, they’ve been fairly poor at capturing the major deviations from those trends that can happen year-to-year and in different regions.

Researchers in Australia and New Zealand wanted to see how the action of big waves — defined as those with a height of at least 3 meters (about 10 feet) — might play a role in influencing the patterns of retreat and expansion, and if they could help improve the reliability of sea ice models. 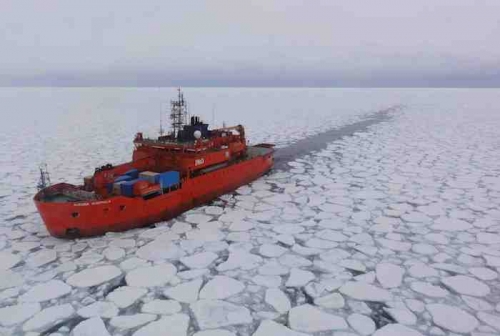 The icebreaker Aurora Australis sailing through a regon of the sea ice called the marginal ice zone in Antarctica.
Credit: Alison Kohout

No one had measured the propagation of large waves through sea ice before, because, as study lead author Alison Kohout, of New Zealand’s National Institute of Water and Atmospheric Research, said, “it’s really difficult.” The sea ice is in some of the most remote regions on the planet, and icebreaker ships must be used to plow through the thick ice.

Kohout and her colleagues went on a two-month ocean voyage to drop five buoys onto the sea ice that could measure the waves as they passed. It is thought that the ice behaves elastically as the waves pass through, bending with the wave peaks and troughs, weakening, and eventually breaking.

For someone who had spent years studying the interaction of sea ice and waves on dry land, the opportunity to be in the field, “to actually see it, and to actually see waves” and the waves breaking up the ice was “quite incredible,” Kohout told Climate Central.

What the team found was that the big waves weren’t losing energy as quickly as smaller waves, allowing them to penetrate much deeper into the ice field and break up the ice there. That exposes more of the ice to the ocean, potentially causing more rapid melt and pushing back the edge of the sea ice.

The researchers also compared observed positions of the sea ice edge with modeled wave heights in the Southern Ocean from 1997 to 2009 and found a good match between the waves and the patterns of retreat and expansions: More big waves matched sea ice retreat and vice versa. 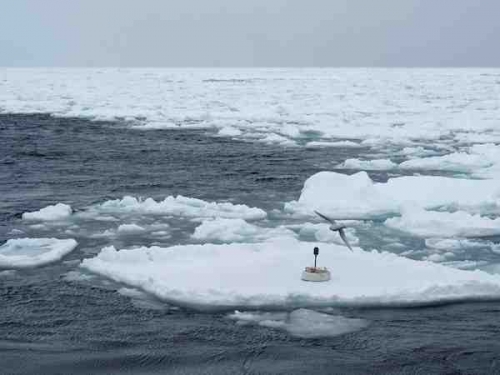 A wave sensor on an ice floe shortly after deployment in Antarctica.
Credit: Wendy Pyper

“We just think that might be able to help understand this regional variability around Antarctica,” Kohout said.

Kohout and other researchers agree that more work needs to be done to fully understand how waves might be influencing sea ice. For example, not enough data exists to examine the relationships in the Arctic.

The study was also limited in what it tells researchers because it only looked at smaller ice floes, said the NSIDC’s Julienne Stroeve, who was not involved in the study. “It's an interesting study, but I suppose I would like to see how this would impact on breaking large ice floes into smaller ones since that's one way that swell penetrating into the ice pack could help to facilitate more melt,” Stroeve said in an email.

Kohout and her colleagues are planning another expedition in a couple of years, and are working to better understand just why big waves don’t dissipate as fast as smaller waves, she said.