The Boulder, Colo., area is reeling after being inundated by record rainfall, with more than half a year’s worth of rain falling over the past three days. During those three days, 24-hour rainfall totals of between 8 and 10 inches across much of the Boulder area were enough to qualify this storm as a 1 in 1,000 year event, meaning that it has a 0.1 percent chance of occurring in a given year. 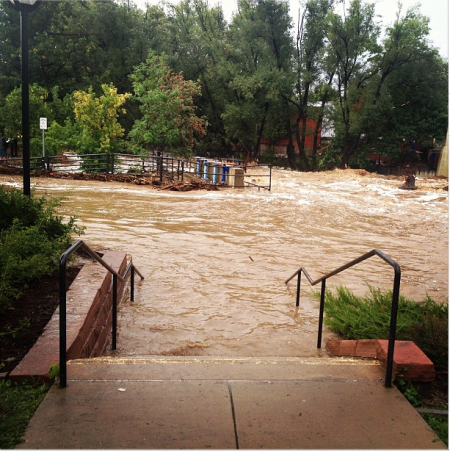 A scene of flooding in Colorado.
Credit: nathancheta/Instagram

At least four people have been confirmed dead so far with many more still missing, and thousands have been evacuated from their homes and businesses. All along Colorado’s Front Range from Denver northward to Boulder and in nearby areas, small creeks have been transformed into raging rivers, and surges of water, mud, and debris have blasted their way through canyons, at one point trapping a firefighter on a treetop before being rescued. Numerous longstanding records have been smashed, including the all-time 24-hour rainfall record in Boulder.

“This is clearly going to be a historic event,” National Weather Service Director Louis Uccellini said in an interview. “The true magnitude is really just becoming obvious now.”

Uccellini said the Weather Service has initiated a review of its performance leading up to and during the event. Although the potential for heavy rainfall was in the agency's forecasts a week in advance, he said, “Clearly the magnitude of the rainfall and the repetivieness of it in some critical areas was not pinpointed” well ahead of time. Uccellini said that this event will be the new historical high water mark for many affected rivers and streams. In a technical discussion on Thursday, the NWS described the rainfall amounts as “biblical.”

On average, Boulder gets about 1.7 inches of rain during September, based on the 1981-2010 average. So far this month, Boulder has received 12.3 inches of rain. This smashes the record for the wettest month ever in Boulder, which was set in May 1995 when 9.59 inches of precipitation fell — and September isn’t even half over! Not only that, but the average yearly rainfall in Boulder is 20.68 inches. This means that Boulder picked up well over half its annual precipitation in just a couple of days.

This comes on the heels of a summer when Boulder experienced a moderate drought according to the U.S. Drought Monitor. This summer also featured the Colorado's most destructive wildfire on record.

During the past couple of weeks, the weather across the West has featured both an active Southwest Monsoon and a broad area of low pressure at upper levels of the atmosphere, which has been pinned by other weather systems and prevented from moving out of the region. It was this persistent low pressure area that helped pull the moisture out of the tropics and into Colorado. Signs point to the tropical Pacific being the source of the abundant moisture according to the University of Wisconsin’s Cooperative Institute for Meteorological Satellite Studies. From there, the moisture plume was transported northeastward, over Mexico and into Texas, and then northward by upper level winds.

This tropical air mass, which is more typical of the Gulf Coast than the Rocky Mountains, has been forced to move slowly up and over the Front Range by light southeasterly winds. This lifting process, known as orographic lift, allowed the atmosphere to wring out this unusually bountiful stream of moist air, dumping torrents of rain on the Boulder area for days on end. There was also broader-scale lifting of the air that resulted in heavy rain in areas of eastern Colorado and western Kansas as well.

According to meteorologist Jeff Masters of Weather Underground, the amount of moisture in the atmosphere, or “precipitable water,” as measured by a weather balloon over Denver on September 12, reached record values for the month of September.

The National Weather Service (NWS) said in an online discussion on Friday that the amount of precipitable water in the air over Colorado is still at record levels for this time of year, which is an indication that the potential for heavy rainfall remains high.

Colorado has a long and tragic history of flash flood events, most notably the Big Thomson Canyon Flood in 1976, which resulted in 139 deaths after a slow-moving thunderstorm dumped a foot of rain in just four and a half hours, causing a massive wall of water to blast through the canyon. According to the NWS forecast office in Denver/Boulder, the river stage at the North Fork of the Big Thompson river so far has exceeded the Big Thompson Flood of 1976 by more than 1 foot. 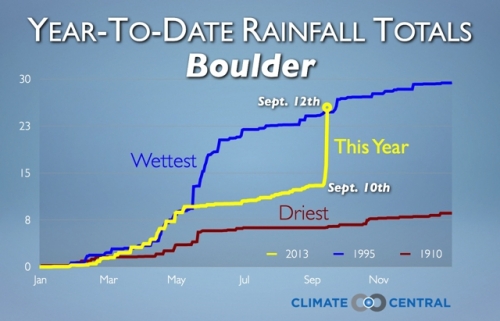 Enough rain fell between Sept. 10-12 to turn 2013 from one of Boulder's driest years into a year that, so far, is rivaling its wettest on record.
Click image to enlarge. Credit: Dennis Adams-Smith/Climate Central.

It will take climate scientists many months to complete studies into whether manmade global warming made the Boulder flood more likely to occur, but the amount by which this event has exceeded past events suggests that manmade warming may have played some role by making the event worse than it would have otherwise been.

Considering that this flood event occurred in the backyard of some of the world's top climate researchers, it is likely that this event will be closely researched. Boulder is home to several major weather and climate research institutions, including the National Center for Atmospheric Research and the Earth System Research Laboratory, both of which were forced to close due to flooding.

Extreme rainfall events have become more frequent across the U.S. during the past several decades in part due to manmade global warming. Increasing air and ocean temperatures mean that the air is generally carrying more water vapor than it used to, and this moisture can be tapped by storm systems to yield rain or snow extremes. Trends in extreme precipitation events vary by region, though, and in general the biggest increases have taken place in the Midwest and Northeast. However, most parts of the U.S. have seen an increase in extreme precipitation events, according to the draft National Climate Assessment report that was released this past January. The report goes on to note that in the future, “increases in the frequency and intensity of extreme precipitation events are projected for most U.S. areas.” 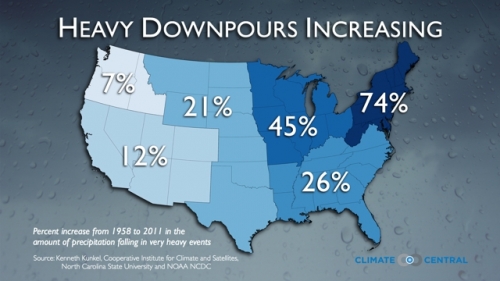 The increase in the most extreme precipitation events (99th percentile) since 1950.
Click image to enlarge. Credit: Climate Central/National Climate Assessment

An increase in the frequency and intensity of extreme precipitation events is expected to take place even though annual precipitation amounts are projected to decrease in the Southwest. Colorado sits right along the dividing line between the areas where average annual precipitation is expected to increase, and the region that is expected to become drier as a result of climate change. That may translate into more frequent, sharp swings between drought and flood, as has recently been the case. Last year, after all, was Colorado's second-driest on record, with the warmest spring and warmest summer on record, leading to an intense drought that is only just easing.

Previous studies have found that global warming made some extreme rainfall and flood events more likely, including major flooding in the U.K. in 2000. Some recent work has found mixed evidence about whether warming played a significant role in other flood events, though, such as the Queensland floods in Australia in 2011-12.

The biggest and most consequential rise in flood risk may take place outside the U.S., in countries that don’t have as much of a capacity to bounce back from such disasters, however. A study published in the journal Nature Climate Change on June 9 found that flood frequency as well as the number of people at risk of inundation from flood events are both likely to increase as the world continues to warm, but most especially in developing countries in Southeast and South Asia.