As the drought wears on, a culture of water conservation has risen with it, especially in San Antonio and Austin.

The drought forced Austin officials to rethink how water is used. In San Antonio, a desire to save water for endangered species had jump-started its conservation movement, which meant it was further along in its efforts when the drought began. 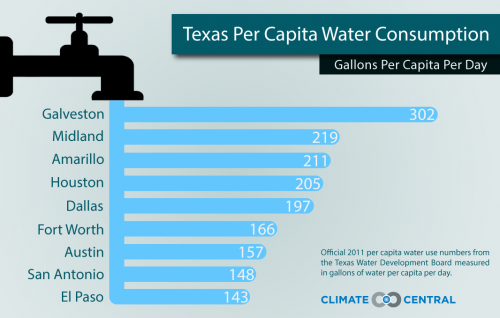 San Antonio and Austin are separated by roughly 80 miles and receive an average of about 32 inches of rain each year. They sit just east of the 100th Meridian, which is often considered the divide between east and west where the plentiful rainfall greening the east quickly becomes the arid desert of the interior west.

The cities use less water on average than Houston and Dallas, but not El Paso, a West Texas desert city whose 8.7 inches of annual rainfall have long required significant water conservation.

Some cities in Texas are enormous water consumers regardless of which side of the wet-dry divide they’re on. Texas Water Development Board 2011 data show that El Paso's daily per capita water use was 143 gallons, while Galveston, located in wet southeast Texas, uses 302 gallons of water per capita per day.

Midland, in arid West Texas, has among the highest per capita water use in the state with 219 gallons daily, according to 2011 state data. Midland Interim Utilities Director Holly McGrath-Rosas said the city has slashed that water consumption roughly in half since the drought, though no data were available this week to show that.

San Antonio’s daily per capita water use in 2011 was 148 gallons, slightly lower than Austin’s 157 gallons that year. Since the worst of the drought, however, both cities have reduced their water use, with San Antonio using 127 gallons per day in 2013, and Austin using 138.

Texas State Climatologist John Nielsen-Gammon said that traditionally, San Antonio and bone-dry El Paso have been the cities leading the state in water conservation because of their unique hydrological situations.

In the 1990s, endangered species, including the Texas blind salamander, were found in springs fed by the Edwards Aquifer, San Antonio’s primary source of drinking water. The Sierra Club sued the federal government in 1991 to ensure two springs containing the salamander and six other endangered species were protected from water pumping for nearby cities. A federal judge ruled in favor of the endangered species in 1993.

Nielsen-Gammon said the aquifer had to be managed so that there were adequate natural water flows in the springs to allow the species to survive. That meant many years of pumping large amounts of water for San Antonio and other nearby cities had to be curtailed.

Eventually, TV station weathercasters began reporting the level of the Edwards Aquifer along with the daily weather forecast, forcing residents there to pay closer attention to their water consumption.

“It’s a culture that’s developed here the last couple of decades that was a result of the Endangered Species Act lawsuit that put a cap on how much water could be pumped from the Edwards Aquifer,” San Antonio Water System spokesman Greg Flores said. “That change in culture and behavior in terms of water use and water efficiency really has driven San Antonio in a different way (from how other Texas cities) embarked on their efforts.”

Residents’ behavior has become much more water efficient over the years, he said, assisted by the city’s distribution of high-efficiency toilets and help with the retrofitting of water fixtures in hotels and schools. 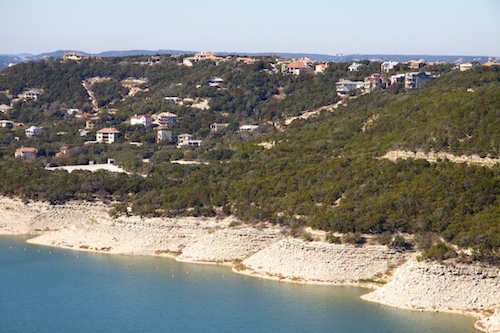 Lake Travis, part of the Austin, Texas, water supply system, was about 37 percent full in mid-February in part because of drought.
Credit: Bobby Magill

Now the city water system, which recently announced it is looking to desalinating plentiful brackish ground water as another water source, is trying to spread more drought information to the public, informing residents about how much water they should put on their lawns while taking into account the week’s weather forecasts, he said.

Austin is quickly catching up.

Since 2006, the city has seen a 13 percent decrease in its average per-capita water consumption through 2013. Austin’s daily per capita water demand for the past 25 years peaked in 2000, when the city consumed nearly 195 gallons each day per capita, a figure that fell to 180 gallons in 2008 and to 137 gallons last year.

The 2011 drought is a major part of that decline in water use in Austin, city water utility spokeswoman Jill Mayfield said.

“It changed it dramatically,” she said, referring to drought affecting water consumption. “We started showing more pictures of Lake Travis. I think that really brought it home.”

Lake Travis is part of a system of reservoirs impounding the Colorado River — a river in Texas, not the same as the Colorado River that flows through the Grand Canyon — and it's the primary source of water for the city of Austin. The lake, only 37 percent full at the end of February, is the postcard example of how drought is keeping reservoirs from filling.

“There’s lots of demands on that water source; it’s getting lower and lower,” Mayfield said. “I think people really started to get it, and people said, ‘Do we need to do more?’ ”