August Ties July as Hottest Month Ever on Record

In what has become a common refrain this year, last month ranked as the hottest August on record, according to NASA data released Monday. Not only that, but the month tied July as the hottest month the world has seen in the last 136 years.

Watch global temperatures rise over time, culminating in the streak of record hot months of 2016, including July and August, the two hottest months on record.
Credit: NASA Earth Observatory

That August continued the streak of record hot months this year and tied July as the hottest month was somewhat unexpected. The seasonal temperature cycle generally reaches a peak in July, as it did this year. But August was so anomalously warm — more so even than July — that it tied that month’s overall temperature.

It was also thought that July would likely be the last record hot month of the year, given the dissipation of El Niño.

In NASA’s dataset, August marks the 11th record-setting month in a row. That streak goes back 15 months through July in data from the National Oceanic and Atmospheric Administration. Each agency handles the global temperature data slightly differently and uses a different period of comparison, leading to slight differences in the monthly and yearly temperature numbers. Overall, though, both datasets show clear agreement in the overall warming trend.

That trend is what Gavin Schmidt, director of NASA's Goddard Institute for Space Studies, and other climate scientists emphasize. It is that excess heat that has accumulated over decades thanks to rising levels of greenhouse gases that accounts for the bulk of this year’s record warmth, with El Niño providing only a small boost. 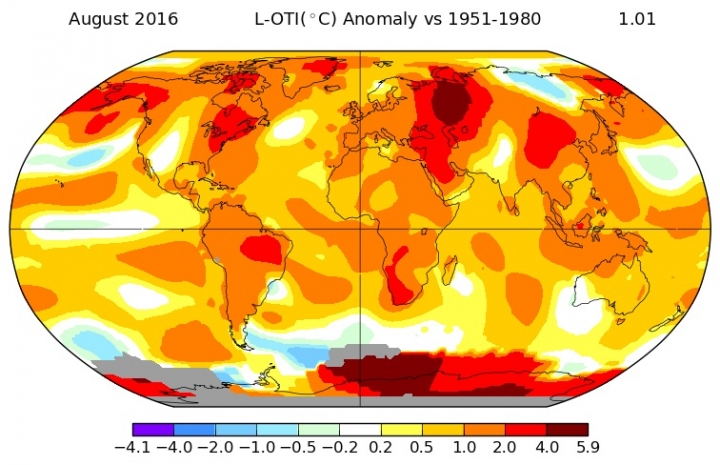 How temperatures across the globe compared to normal during August 2016.
Click image to enlarge. Credit: NASA

“Monthly rankings, which vary by only a few hundredths of a degree, are inherently fragile,” Schmidt said in a statement. “We stress that the long-term trends are the most important for understanding the ongoing changes that are affecting our planet.”

International negotiators hope to curtail that long-term trend by limiting warming to less than 2˚C (3.6˚F) over pre-industrial levels by the end of the century. There have even been discussions to aim for an even more stringent target of 1.5˚C.

To show how close the world already is to surpassing that goal, Climate Central has been averaging the NASA and NOAA temperature data each month and comparing that number to the average from 1881-1910, closer to preindustrial times.

Through July, the global temperature for the year was 1.31˚C (2.36˚F) above the average from that period. A new average will be calculated through August when NOAA releases its temperature data on Sept. 20.

Whether September will continue the record streak is uncertain, but regardless of where it falls, there is already a greater than 99 percent chance that 2016 will take the title of hottest year, Schmidt has said.