From Hawaii’s flurry of hurricanes, to record high sea ice in Antarctica, and a heat wave that cooked the Australian Open like shrimp on a barbie, 2014 saw some wild weather. How much of that was tied to climate change is what scientists around the world tried to answer in the Bulletin of the American Meteorological Society’s annual attribution report, which was published Thursday. 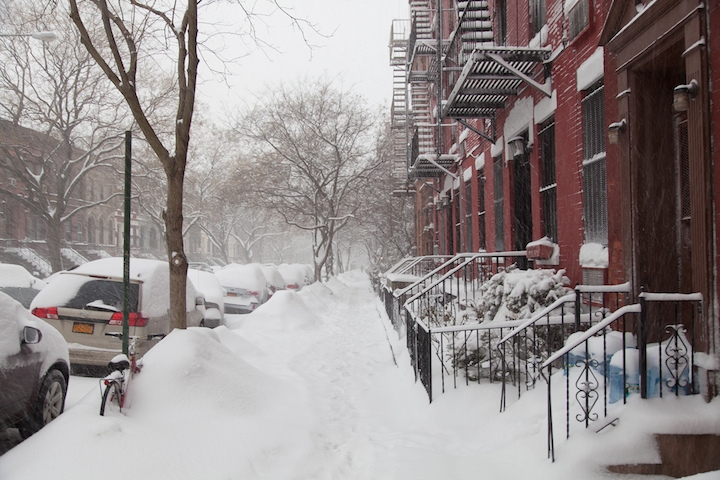 Mounds of snow pile up on the streets and sidewalks of Brooklyn during a February 2014 snowstorm.
Credit: flickr/nycbone

What they discovered was that the clearest impacts of warming could be found in heat-related events, from heat waves on land to unusually hot ocean waters. Other events, like droughts in East Africa and the Middle East, California’s intense wildfires, and winter storms that continually swept across the eastern U.S., were harder to pinpoint. In part this is because such events are inherently complex, with a multitude of factors influencing them.

For example, while the East African drought was found to be both more likely and more intense because of warming, the situation in the Middle East was less clear, with no discernable climate change connection to the various factors that influenced it. Likewise, no direct push from climate change could be found in California’s wildfire activity, though it is clear that it is increasing the overall wildfire risk there.

And while some events, like the U.S. winter storms and the record high Antarctic sea ice extent, could be pinned to a particular cause, that cause could not be linked to climate change. For other events, like the drought in Brazil and flooding in the Canadian prairies, humans influenced the likelihood in other ways besides the greenhouse gases that continue to be emitted into the atmosphere.

What was clear, though, is that the fast-growing field of what is called extreme event attribution is gaining momentum. Researchers are casting a wider net for extreme events to examine and continually refining their methods. Attribution work has traveled a considerable distance since its inception just over a decade ago.

“One thing we can say for sure: We don't say ‘one can't attribute any single event to climate change’ any more,” Adam Sobel, an atmospheric scientist who wasn’t involved with the BAMS report, said in an email.

The BAMS special report was its largest yet, with 32 studies looking at 28 different weather events from all seven continents. The report also included some types of events that didn’t appear in the first three, including wildfires, tropical cyclones and high ocean temperatures.

“It’s a real achievement of the scientific community,” said Noah Diffenbaugh, a Stanford University climate researcher who has conducted attribution research but wasn’t involved in this year’s BAMS issue.

“The report has garnered increasingly broad interest and visibility over the past few years. I'm sure that this interest will only continue to grow,” Jim Kossin, a co-editor of the issue, said in an email.

As has been the case since the first attribution studies, the firmest conclusions about the role of warming came from high temperature events.

Of the eight heat events examined — including ones in Argentina, Australia, South Korea, China and Europe — seven were clearly made more likely because of human-caused warming. (In the eighth, the influence was uncertain.) A May 2014 heat wave in Australia was made 23 times more likely because of warming, according to one of the BAMS studies. In several of the events, warming also made the heat waves more intense. 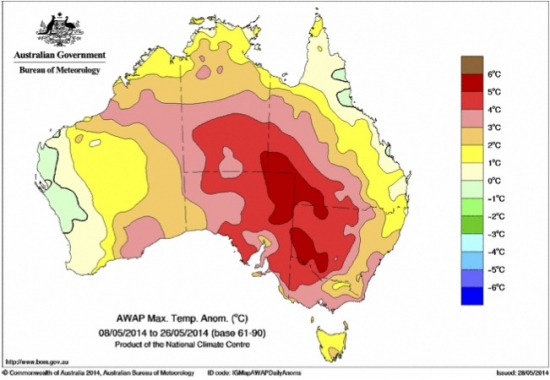 Maximum temperature anomalies (compared to 1961–1990 average) across Australia from May 8 to 26, 2014.
Click image to enlarge. Credit: Australian Bureau of Meteorology

For the more complex weather events examined, the results overall were less clear. While climate change was found to make drought in East Africa both more likely and stronger, it wasn’t found to be a major influence on the drought that has caused severe water shortages in Brazil. (That study was part of a Climate Central attribution effort.)

The same mix of results held true for studies looking into storms. One study found that warming didn’t seem to play a role in the increased winter storm activity over the U.S., but, in another study by the same researchers, they did find that it did up the odds of the unusually high hurricane activity around Hawaii.

The intense wildfire activity in California in 2014 was another extremely complex topic that researchers delved into, finding that while they couldn’t pick out any direct climate change signal in that year’s fires, warming is likely to exacerbate future fire risk.

“This is a case where the world is getting to watch science unfold in real-time, and that means that there’s going to be multiple groups looking at the same or different aspects” of events, possibly coming to different conclusions, but those don’t necessarily contradict each other, Diffenbaugh said.

And just because a study couldn’t find a clear link to global warming for an event or a particular aspect of an event, that doesn’t mean there isn’t one. In some cases, any warming-related trend may not yet be strong enough for scientists to detect, while in others the particular methods scientists are using to look for that trend may need to be refined. 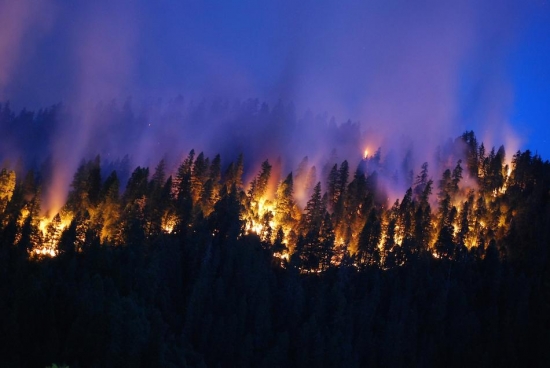 A nighttime view of the Happy Camp Complex fire, which was started by lightning in Klamath National Forest in Northern California in August 2014.
Click image to enlarge. Credit: InciWeb

For instance, the BAMS study found that anomalous wind patterns led to the record-high Antarctic sea ice extent in 2014. But what caused that shift in winds — whether human-caused climate change or the natural fluctuations of the climate — couldn’t be determined.

“The field of extreme event attribution is not just about anthropogenic climate change,” Sobel said. “Scientists are looking at extreme events and asking broadly what caused them, and coming to a range of conclusions, as appropriate.”

Scientists involved with attribution efforts are hoping to keep broadening the types of events they look at and developing methods that can be easily applied to multiple events.

But overall, the message of the studies this year is that “human activity changes the likelihood and behaviors of extreme events, and our ability as a scientific community to adequately (and convincingly) disentangle the human-caused factors from the underlying natural variability continues to improve,” Kossin said.