‘Atmospheric River’ May Put a Dent in California Drought

At long last, a series of Pacific storm systems is producing sorely needed rain and mountain snowfall in California, which has been suffering from one of its worst droughts in at least 500 years. The storms, which began Thursday and are forecast to last through the weekend, are likely to have their greatest impact in Central and Northern California, including the agricultural powerhouse region that is the San Joaquin Valley. 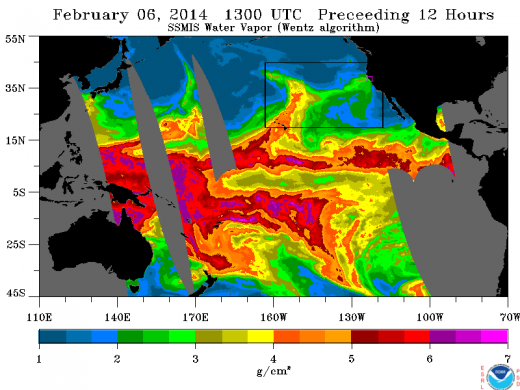 Parts of Central California may receive as much as 4 inches of rain through the weekend, according to the National Weather Service, while 2 feet or more of snow may fall in the California Cascades and parts of the Sierra Nevada Mountains.

Victor Murphy, a National Weather Service meteorologist in Dallas, said he expected the northern half of California to see 2-4 inches of rain over the next week with as much as 4-8 inches in some locations. “It certainly would appear as though this storm can indeed provide some drought relief,” he said.

The storms are tapping into a phenomenon known as an “atmospheric river,” which is a relatively narrow stream of moisture-rich air extending from the tropics northeastward across the Pacific. Atmospheric rivers have helped end California droughts before, according to research by Michael Dettinger of the U.S. Geological Survey and the Scripps Institution of Oceanography. Dettinger’s research, which was published in the December issue of the Journal of Hydrometeorology, found that atmospheric river events can effectively end even major droughts in California within just one month. In fact, Dettinger found that most droughts in the West end abruptly, with one very wet month pulling the state from a significant precipitation deficit to a surplus.

However, California is in such a deep precipitation hole that it would take a statewide average of at least a foot of rainfall to climb out, which forecasters do not see as likely before the end of the wet season on March 31. In fact, the upcoming storms may just be part of a short-term break in the weather pattern that has favored drought conditions in the West.

Winter storm watches are in effect for portions of the California Cascades and Central and Northern Sierra Nevada mountains, which could wind up with more than 2 feet of snow. Still, with a snowpack water content that was at just 12 percent of average as of Jan. 30 — the lowest on record for that far into the winter wet season — it would take significantly more than that to end the drought.

The most severely dry soils in California are in Central and Northern California, which means the storms during the next few days are likely to hit the areas where precipitation is most sorely needed. If the drought continues through the rest of the wet season, it could reverberate throughout the U.S. economy. California's agricultural industry generates more than $40 billion. It produces nearly half of all U.S.-grown fruits, nuts, and vegetables and it is the leading dairy state. Farmers are already facing tough decisions of whether to plant any crops at all, or whether to sell off their cattle due to a lack of adequate food supplies. 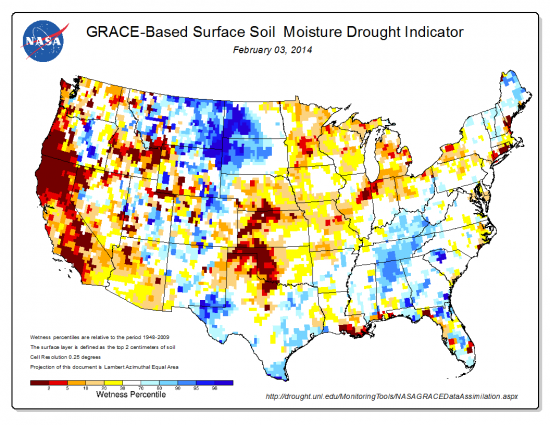 Groundwater and soil moisture drought indicators based on data from NASA's GRACE satellite and other methods. The deep red colors indicate the driest soils and most depleted groundwater.
Credit: NASA.

The current drought began in January of 2013, when the spigot of Pacific winter storms suddenly shut off. Last year was driest calendar year on record since 1895, and the state has little, if any, water reserves to fall back on this year. That's why the state announced on Jan. 31 that it intended to withhold any supplemental water releases from the State Water Project, which provides supplementary water to nearly 25 million Californians and about 750,000 acres of farmland.

The latest U.S. Drought Monitor, released Thursday, shows that the area of California classified as being in “exceptional drought,” which is the worst category, rose from about 9 to about 10 percent. Until last week, California had never seen such severe drought conditions since the drought monitor started 15 years ago.

While droughts occur naturally, manmade climate change is likely adding to the problem by increasing temperatures, which increases the evaporation of water from plants, soils, and reservoirs, thereby worsening drought. Studies show that although global warming may not trigger drought conditions, it is likely already exacerbating them and is more likely to worsen them in the future. Computer models consistently show an increased prevalence of drought in the Southwest U.S. as warming continues.

The proximate cause of the drought is a weather pattern that has been dominated by an unusually intense and persistent area of high pressure off the coast of British Columbia. This feature has acted like a traffic cop at an intersection, rerouting storms northward into Alaska and helping to direct several shots of extremely cold, Arctic air southward into the lower 48 states. Most pertinent to California, it has left the state unusually warm and dry. Right now, the high is stronger than ever, but displaced further north, near Alaska, which has allowed some storminess to sneak into California.

However, long-range forecasts show the high building back in again, closer to California, although potentially in a weaker state than before.

You May Also Like
63 Years of Global Warming in 14 Seconds
Record Number of Billion-Dollar Disasters Globally in 2013
Climate Change: The Winter Olympics' Great Thaw
Adapting to Sea Level Rise Could Save Trillions by 2100