Tropical Storm Erika may have fizzled out, leaving Florida’s 10-year hurricane-free streak still running, but there is plenty of other tropical cyclone activity afoot: Once again this year, there is a string of storms spanning the Pacific, while over in the Atlantic, a hurricane has formed further east in the tropics than any other on record. 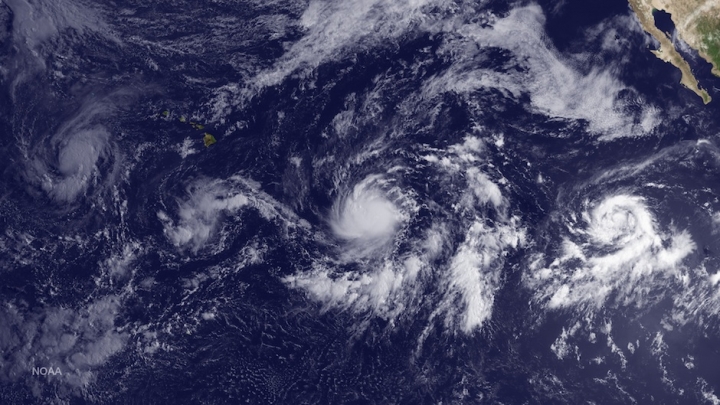 Like many Atlantic storms, Hurricane Fred began as what is called an easterly wave ­— basically an area of low pressure that, as hurricane researcher Brian McNoldy put it in a blog post, “can serve as the seed for hurricane formation.”

But typically this transformation takes time to occur, if it occurs at all.

“Only a small percentage of easterly waves EVER develop into a tropical cyclone, let alone immediately off the coast,” McNoldy, of the University of Miami, said in an email.

What likely allowed Fred to do so was an area of much warmer than average sea surface temperatures off the coast of Africa right now, McNoldy said.

Fred first became a tropical depression in the wee hours of Sunday morning; less than four hours later it intensified into a tropical cyclone. It became a hurricane just over 24 hours after it first formed, the furthest east a storm has done so in the tropical Atlantic.

The quick intensification resulted in the first ever hurricane warning for the Cape Verde Islands, which are just off the African coast. (The islands have been hit by two hurricanes before, though prior to the modern system of hurricane watches and warnings.)

Fred, and Erika before it, formed despite a strong El Niño that has otherwise helped keep a lid on Atlantic activity this season.

This stark difference between ocean basins comes from the different effects El Niño has in different regions. In the Atlantic, it tends to lead to more subsiding air and higher wind shear (or winds that go in different directions and speeds at different heights in the atmosphere), both of which tamp down on storm activity. In the Pacific, though, it leads to a more conducive atmospheric environment and warmer ocean waters, which provide hurricanes with fuel.

Particularly noteworthy is the spate of storms that have formed or traveled near the Hawaiian Islands, the latest of which is Hurricane Ignacio. So far the island chain has avoided any direct hurricane hits from the two storms that passed through its neighborhood this year. Last year, three storms threatened the islands.

Hawaii is expected to see more tropical cyclones in the future because of global warming, one of the few clear regional signals to have emerged from climate models. The increase is expected to occur because of more conducive conditions in the central Pacific that will allow both more storms to form there as well as eastern Pacific storms to survive longer.

Ignacio is one of three storms across the Pacific now. The other two are Hurricane Jimena, which is well away from land between Mexico and Hawaii, and Hurricane Kilo, located near the International Date Line. All three are Category 4 storms, the first time such a line-up has been observed in the Pacific.

This isn’t the first time this season that multiple storms have been lined up across the Pacific: Back in July, four storms spanned the ocean basin.

How hurricane activity in other regions, like the eastern Pacific or the Atlantic, might change with warming is an active area of research right now. In the flurry of hurricane-climate change research in the decade since Hurricane Katrina, scientists have come to largely agree that while some areas may see an uptick in storms, global tropical cyclone activity may decline. But of those storms that do form, more are likely to be on the more intense end of the spectrum.

You May Also Like:
Carbon Emissions From Power Plants Hit 27-Year Low
From Katrina, an ‘Amazing’ Decade of Climate Research
10 Years Later: Was Warming to Blame for Katrina?
Katrina: Lasting Climate Lessons for a Sinking City