Depths of Atlantic May Hold Key to Global Warming Hiatus

The key to the slowdown in global warming in recent years could lie in the depths of the Atlantic and Southern oceans where excess heat is being stored – not the Pacific Ocean as has previously been suggested, according to new research. 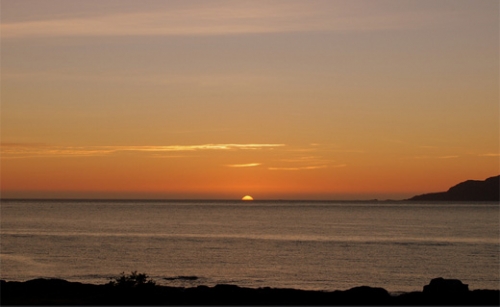 The Atlantic Ocean may hold the key to the warming hiatus, says a new study, and not the Pacific as previously thought.
Credit: Hans Petter Fosseng/flickr

But the finding suggests that a naturally occurring ocean cycle burying the heat will flip in around 15 years’ time, causing global temperature rises to accelerate again.

The slowdown of average surface temperature rises in the last 15 years after decades of rapid warming has been seized on by climate change skeptics and has puzzled scientists, who have hypothesized that everything from volcanic eruptions and sulphur from Chinese power stations to heat being trapped deep in the oceans could be the cause. Several studies have focused on the Pacific as potentially playing a major role.

The new study, published in the journal Science on Thursday, concludes that the Pacific alone cannot explain the warming “hiatus” and that much of the heat being trapped by greenhouse gases at record levels in the atmosphere is being sunk hundreds of meters down in the Atlantic and Southern oceans.

Ka-Kit Tung, author of the paper and University of Washington professor, said: “The finding is a surprise, since the current theories had pointed to the Pacific Ocean as the culprit for hiding heat. But the data are quite convincing and they show otherwise.”

“We are not downplaying the role of the Pacific. They are both going on [the oceans having an effect on temperatures]; one is short term [the Pacific], one is long term [the Atlantic],” he told the Guardian.

A shift in the salinity of the north Atlantic triggered the effect around the turn of the century, the study says, as surface water there became saltier and more dense, sinking and taking surface heat down to depths of more than 300 meters.

Using temperature data from floats across the world, Tung found the Atlantic and Southern Oceans “each account for just under half the global energy storage change since 1999 at below 300m”. The study’s result, he says, does not support the “Pacific-centric” view of earlier work on whether heat is being stored. 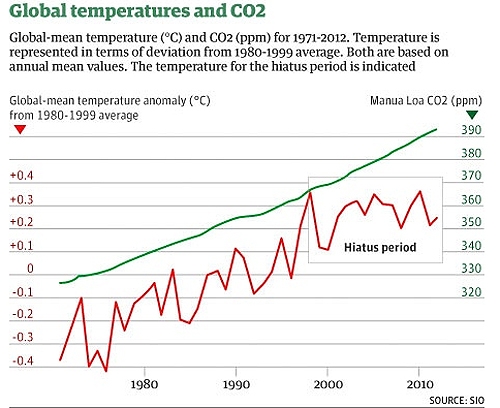 “We were surprised to see the evidence presented so clearly. When you go with the energy, you cannot argue with that,” said Tung.

Jon Robson, a climate scientist at the University of Reading and who is unconnected to the study, said the new work did not disprove evidence of the Pacific’s role in the warming slowdown.

“The hiatus really is a patchwork problem of lots of different things, volcanoes, the Pacific, the Atlantic. This paper does elevate the Atlantic’s role, which has been largely ignored before. This does suggest a role for the Atlantic but there’s a lot more to it than that,” he told the Guardian.

“It doesn’t dispel the key role for the Pacific in the hiatus. There is evidence that the hiatus is a northern hemisphere winter phenomenon, which does point the finger quite strongly to the Pacific.”

Piers Forster, professor of climate change at the University of Leeds, said: “This paper suggests that heat disappearing into the depths of the Atlantic and Southern Oceans are the dominant cause. Their ideas seem fine but I’m also convinced there is more going on: the El Niño and relative cooler European and Asian winters remain important aspects to understand.”

The study, Varying Planetary Heat Sink Led to Global-Warming Slowdown and Acceleration, gives little room for complacency that the oceans can safely store heat caused by human activities because the cycle that buries the heat deep in the Atlantic will “inevitably” switch back. Heat would then no longer be removed deep underwater, leading to “another episode of accelerated warming” at the surface.

Forster added: “Most importantly, this paper is another a nail in the coffin of the idea that the hiatus is evidence that our projections of long-term climate change need revising down. Variability in the ocean will not affect long-term climate trends but may mean we have a period of accelerated warming to look forward to.”

This February, the national science academies of the U.S. and UK said the global warming slowdown did not “invalidate” the long-term trend of rising temperatures caused by man-made climate change.