It is already taking shape as the 21st century urban nightmare: a big storm hits a city like Shanghai, Mumbai, Miami or New York, knocking out power supply and waste treatment plants, washing out entire neighborhoods and marooning the survivors in a toxic and foul-smelling swamp. 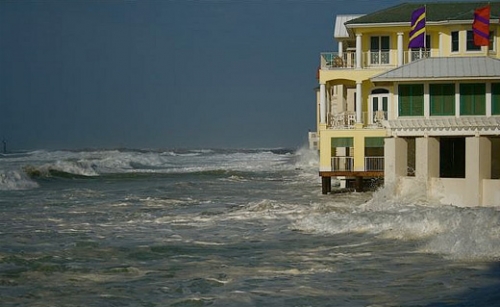 The rate of sea level rise is three or four times faster than the global average on the U.S. East Coast, which is also a “hotspot,” with cities, beaches and wetlands exposed to flooding.
Credit: Ed Hart/flickr

Now the world's leading scientists are suggesting that those same cities in harm's way could help drive solutions to climate change.

The draft is due for release in Berlin on Sunday, the third and final installment of the IPCC's authoritative report on climate change.

“The next two decades present a window of opportunity for urban mitigation as most of the world's urban areas and their infrastructure have yet to be constructed,” the draft said.

Around 1 billion people live in cities and coastal areas at risk of sea-level rise and coastal flooding – and those figures are expected to rise in the coming decades.

Most of the high-risk areas are in Asia, but the U.S. East Coast, where the rate of sea level rise is three or four times faster than the global average, is also a “hotspot,” with cities, beaches and wetlands exposed to flooding.

But those at-risk cities also produce a large and growing share of emissions that cause climate change – which makes them central to its solution.

“They are at the frontlines of this issue,” said Seth Schultz, research director for the C40 group of mega-cities taking action on climate change. “And on the whole cities have extraordinarily strong power to deliver on these things.” 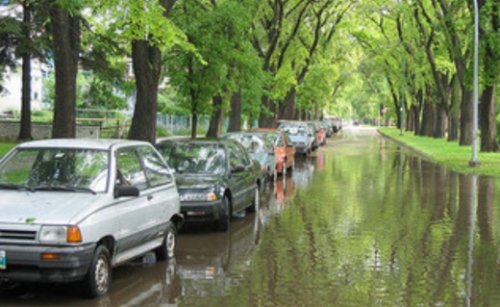 A nightmare scenario in a future of rising sea level would be flooding from both directions – the coast and inland – with saltwater contaminating groundwater reserves, and saturating farmland.
Credit: Jezz/flickr

Even in America, where Republican governors and members of Congress deny the existence or have rolled back action on climate change, cities are moving ahead.

South-east Florida faces a triple threat – flat, built on porous rock, and in line for high sea-level rise. Planners in four south-eastern counties are preparing for 24 inches of sea-level rise by 2060 – which could put a large area around Miami underwater.

Beaches and barrier islands are already starting to disappear. Miami and other towns flood during heavy rain storms and full-moon high tides, and saltwater is already seeping into the network of canals in the Everglades.

“Sometimes it is tempting to think those impacts just occur in small coastal areas, but they are more extensive than that,” said Jennifer Jurado, director of natural resources for Broward County.

Her nightmare scenario in a future of rising sea level would be flooding from both directions – the coast and inland – with saltwater contaminating groundwater reserves, and saturating farmland.

Jurado and officials in three other south-eastern counties of Florida have teamed up on a plan to cut emissions and protect populations from future sea-level rise.

Officials started with computer modeling to draw up details plans of what Florida would look like under future sea-level rise.

Broward County is now restricting development in areas at risk of two feet of sea-level rise. Water districts in Sweetwater and other towns south of Miami are installing pumps at $70 million each to divert storm runoff water and pump it back into the ocean.

And while Florida's Republican Governor Rick Scott, has put climate change efforts on hold, Broward County last month committed to getting 20 percent of electricity for county from renewable sources and increasing energy efficiency by 20 percent. Homeowners are being offered rebates on their property taxes to install solar panels.

The county has also pledged to cut greenhouse gas emissions 80 percent by 2050. 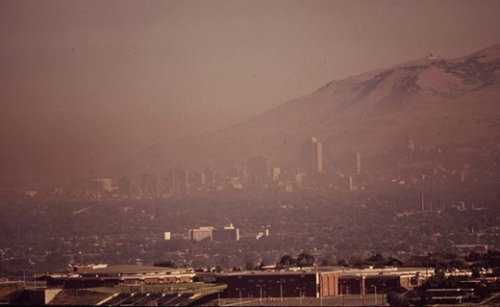 Smog-covered sky in Salt Lake City, Utah. The city has set ambitious targets to cut emissions, and was the first in America to commit to offsetting emissions from official travel.
Credit: Wikimedia Commons

Across the country in another Republican-controlled state, Salt Lake City in Utah has also been dealing with climate change.

Salt Lake City, which is at risk of running out of water because of climate change, set ambitious targets to cut emissions, and was the first city in America to commit to offsetting emissions from official travel.

Such initiatives are becoming more common across America as city officials take future climate change into account for planning, zoning and land use, said Christina DeConcini, director of government affairs for the World Resources Institute.

“I think there is a growing focus on climate change,” she said. “A lot of cities have sustainability departments and people focusing on it, and more and more of the work they are doing is focused on climate and climate impacts.”

The reason, she said, was transparent. “Cities that are more at risk are definitely paying more attention.”