Astronauts have the best seats in the house to watch a lot of amazing processes around the globe. This year’s Arctic sea ice melt is no exception.

In an image captured from the International Space Station (ISS), spirals and eddies of ice are seen working south through the Sea of Okhotsk, located on the western edge of Russia and just north of Japan’s Hokkaido Island. The swirls are due to a combination of the current moving it from north to south and the resistance provided by the islands at the end of the road. 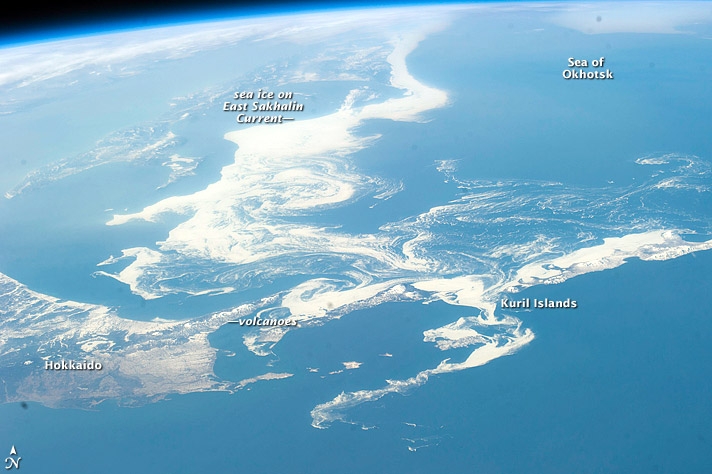 Sea ice accumulates in the Sea of Okhotsk throughout the winter and ice there is considered part of the larger Arctic sea ice pack. This year, sea ice reached its maximum coverage in late March. Sea ice covered 5.7 million square miles, which is more than 280,000 square miles below the 1981-2010 average. That made this year the fifth-lowest maximum since satellite recordkeeping began in 1978. The Sea of Okhotsk was one of the areas with particularly low sea ice extent this year.

Arctic sea ice has been declining across all seasons with winter sea ice declining by 2.6 percent per decade. Summer extent is much more dramatic, though, declining at a rate of 13.7 percent per decade. Warmer water and air temperature are the big drivers behind this decline, both signs of a changing climate. Local weather patterns tend drive year-to-year variability, though.

Astronauts aboard the ISS can watch these and other changes in intimate detail as they orbit the Earth roughly 15 times every 24 hours. The picture was captured by the six-person crew currently manning the space station through the end of May. The only downside to their view? The slight haze, which NASA’s Earth Observatory attributes to smog drifting northeast from Japan and China.

You May Also Like
The Explosive Growth of California’s Drought in 1 Chart
Fracking Company Considers Revealing Secret Chemicals
Extreme Tornado Swings: What Holds the Key?
Storm Surge Could Flood NYC 1 in Every 4 Years