As Temperatures Rise in Tucson, so Do Concerns over Health Risks Linked to Higher Ozone Levels

Mike Friel of Tucson has suffered from breathing problems his whole life — a consequence of being born with cystic fibrosis. His first hint of asthma came at age 5, when he started wheezing. His family moved to Arizona in the 1970s when he was 14, with hopes that the dry air would alleviate his symptoms.For decades it seemed like the right move, until about four years ago when Friel’s asthma started acting up.

“I’ve had trouble sometimes where you just can’t breathe,” said Friel, who is now 56. “You feel like your lungs have turned to wood or something.”

Sometimes, ozone pollution in the air makes his asthma worse, he said.

“The ozone is like a molecule that can definitely get into your chest, way down into your lungs,” he said. 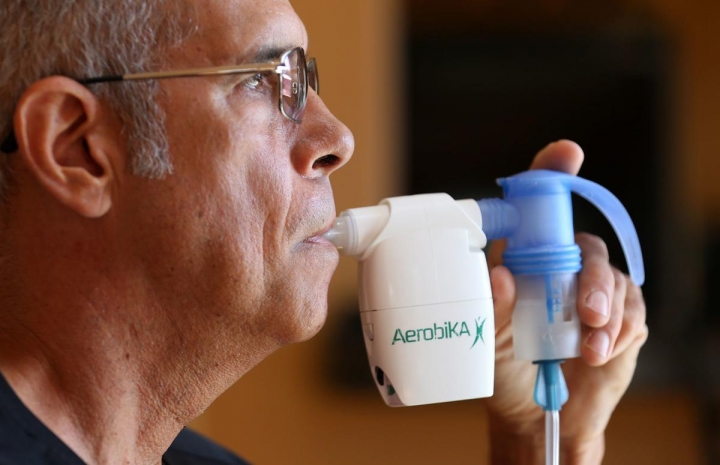 Tucsonan Mike Friel says his asthma seemed to get worse about four years ago, coinciding with an increase in ozone pollution in the city.
Credit: Mike Christy / Arizona Daily Star

Tucson was once a haven for people plagued with respiratory problems. From the 1960s through the ’80s, droves of families relocated here, seeking sanctuary in what was considered one of the nation’s best areas for asthmatics.

That’s no longer the case.

A steady increase in population brought with it more tailpipe pollution as well as pollution from power plants as the area industrialized. The new concrete and bricks raised temperatures in a desert city, compounding the effects of global climate change. Along with an increase in pollen blowing out of non-native plants imported by newcomers, these factors have made it harder for residents like Friel to breathe. 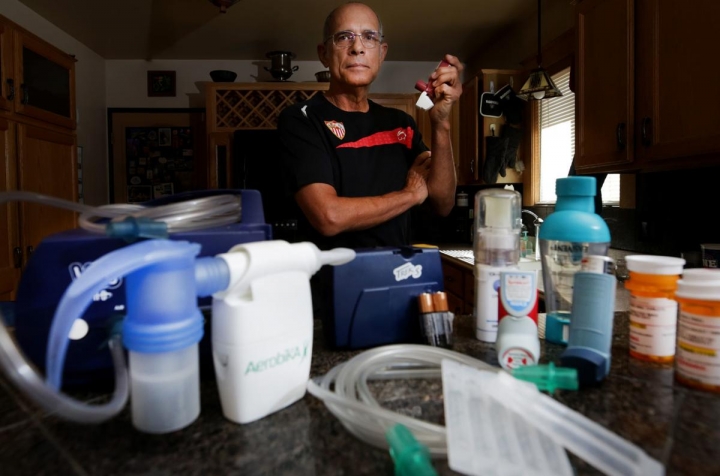 Friel’s family came to Tucson in the ’70s in hopes that the desert climate would help him cope with his asthma. Now he says his health is being negatively affected by rising ozone levels.
Credit: Mike Christy / Arizona Daily Star

Also known as smog, ozone needs two key ingredients: sunlight and air pollution. The higher the temperature, the faster ozone is produced through chemical reactions occurring inside polluted air. Ozone forms when nitrogen oxide and volatile organic compounds in the air, most commonly from motor vehicles, react in sunlight’s presence.

The higher ozone levels are a threat to public health, said Eric Betterton, a University of Arizona atmospheric sciences professor and an air pollution monitoring and modeling expert.

“That (EPA) standard of 70 parts per billion has been set to protect human health,” Betterton said. “If we are violating it, we should be concerned, especially people who are susceptible to poor air quality: children, the elderly and asthmatics.”

Betterton, the UA’s head of hydrology and atmospheric sciences, this year started monitoring air quality on campus. His research could help Pima County draft a plan to put the county back in compliance with ozone standards. He’s measuring volatile organic chemicals, which hasn’t been done here before.

He said it may take up to a decade to determine if warming temperatures are contributing to ozone problems here.

“It’s a complex system. It’s too early to say after two to three high-ozone seasons, ‘It’s climate.’ I don’t know what other variables have changed,” Betterton said. “This is going to take years to play out.”

Lung association officials, however, are more convinced that rising temperatures already are driving up ozone levels. In part, that’s because they’re not just rising in Pima County.

In Arizona, for instance, the annual number of ozone bad air days in Maricopa and Pinal counties has risen at roughly the same pace in the past decade as here — close to or slightly more than double the number today compared with 2010.

The bad air days are days in which authorities warn older adults, children and people with lung disease or otherwise sensitive lungs to stay indoors or avoid outdoor exertion.

“Every indication is that climate change is having that impact” on ozone, said Janice Nolen, the lung association’s assistant vice president for policy. “Other factors contribute to it, but climate change overall is making it harder to clean up and more likely to form.”

These trends are consistent with the last three years being the hottest on record globally, she said.

In Tucson, 2018 was the fourth warmest year on record. All five warmest years on record here have occurred from 2014 through 2018.

While the EPA tightened ozone air quality health standards in 2015, the lung association has recalculated the number of bad air days in earlier years based on the 2015 standard, making comparisons with past years “apples to apples,” Nolen said.

Ozone Levels are Predicted to Rise

While unhealthy ozone days occur less frequently both in Tucson and nationally today than before the Clean Air Act was enacted in 1970, warming temperatures threaten to make ozone levels worse in the future, two studies have found.

Researchers found in a 2014 study that assuming that greenhouse gas emissions rise until 2050 and then level off, the resulting temperature increases would boost summertime ozone levels over most of the U.S.

That would increase the number of days nationally where ozone levels exceeded the then-current EPA standard by 70 percent. The research was led by Gabriele Pfiester, an atmospheric scientist for the National Center for Atmospheric Research.

But ozone levels would drop to as little as 1 percent of today’s total by 2050 if greenhouse gas emissions are controlled through rapid adoption of clean energy, researchers found. The study was published by JG Atmospheres, a journal run by the American Geophysical Union.

A 2016 study concluded that unhealthy ozone days would increase by nine days in California and the Northeast and by up to 2.3 days in much of the rest of the country by 2050 unless climate change is substantially slowed.

That study, by researchers at Harvard University and the National Center for Atmospheric Research, was published in the journal Geophysical Research Letters.

While the relationship between ozone and public health is complex, a growing body of evidence shows that pollution increases the risks of respiratory and cardiovascular problems that can lead to death.

Air pollution, more pollen and just the arrival of more asthmatics have all been advanced as theories underlying Arizona’s growing asthma problem. But no studies have been done to pinpoint the exact causes, said Stacey Mortenson, director of health promotion for the lung association’s western division.

Air pollution is definitely a factor in Arizona’s asthma problems, although the fine particles emitted by industries and found in dust are bigger contributors than ozone, said Al Brown, an Arizona State University lecturer and former state and Maricopa County environmental official.

“I recognize how important air quality is to health,” said Dr. Tara Carr, an allergist, immunologist and professor at the University of Arizona’s Department of Medicine. “If this (ozone) trend continues in the wrong direction, I think it will have potentially significant impacts on health for our patients with lung disease.”

A 2018 study by scientists across the world, led by George Washington University, found ozone and other industrial air pollution was responsible for roughly one out of every 10 asthma-related emergency room visits across the U.S.

And in 2017, a Harvard study documented a link between ozone and risk of mortality among Medicare recipients in the U.S.

As temperatures rise and ozone pollution gets worse, these impacts are causing misery as they play out inside the bodies of Tucson residents like Mike Friel.

On April 15, for instance, he drove to Maricopa County to help celebrate the birth of a nephew. He left after two hours because he feared a serious asthma attack if he stayed longer.

“As it was, it took me two days to get over spending two hours in Phoenix,” he said.

“It feels like someone maybe strapped a belt across your chest,” he said. “If you let it get worse, you can’t even get a breath out.”