The normally tame Bow and Elbow Rivers that course their way through downtown Calgary, Alberta, have taken over the city, transforming Canada's fourth-largest city into North America's Venice. A slow-moving storm system, coming on top of an unusually wet spring, has produced massive flooding across southern Alberta, prompting tens of thousands to hastily evacuate sections of Calgary, and producing surreal images of the city's landmarks, such as the Calgary Stampede grounds, under several feet of water. 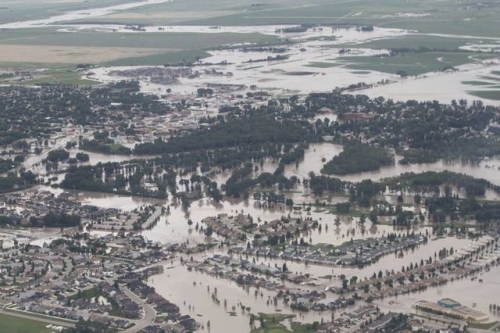 Aerial photo of the High River flood in Alberta on Friday.
Credit: Steph Hansen via Twitter.

According to CBC News reports, the resort town of Banff has been cut off from road access after a torrent of water and mud took out a section of the Trans-Canada Highway. The picturesque Banff and Canmore areas to the northwest of Calgary received more than 6 inches of rain on June 20 alone, and have received more than 200 percent of their typical monthly rainfall during the past month.

The situation in Alberta is only the latest example of destructive flooding events that have struck disparate locations in the Northern Hemisphere during the past two months. Germany, Hungary, and the Czech Republic all were deluged with some of their worst flooding in decades during May and June, and torrential downpours related to the South Asian Monsoon killed nearly 600 in India this week, as the mighty Ganges River swelled near Haridwar, about 130 miles north of New Delhi.

While the triggers for each of these flooding events have been unique and complex, involving everything from the location and operation of dams and other water management infrastructure to weather patterns that seemed to get stuck in place, new scientific research shows that during the course of the next several decades, global warming is likely to increase the risk of river flooding events around the world, putting millions more people at risk, especially in rapidly growing developing countries in Southeast Asia, South Asia, eastern Africa, and the northern half of the Andes. 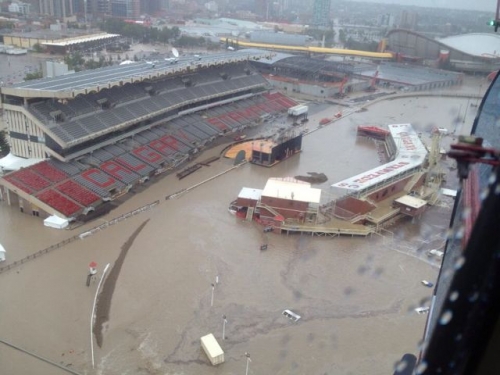 A study published in the journal Nature Climate Change on June 9 found that flood frequency as well as the number of people at risk of inundation from flood events are both likely to increase as the world continues to warm.

The physical science behind the findings is relatively simple: as the air and oceans warm, more moisture is added to the atmosphere, giving storms more water vapor to work with and wring out as rain or snow. Studies have already shown an observed increase in extreme precipitation events in parts of the Northern Hemisphere, including a large uptick in heavy precipitation events in the Midwest and Northeastern U.S. However, until the Nature Climate Change study was published, researchers had not yet been able to shed much insight on the changing contours of global river flood risk.

For example, a 2012 report from the U.N. Intergovernmental Panel on Climate Change found “low confidence” in projections of future river flooding.

The new study, by a group of researchers in Japan and the U.K., used 11 updated climate models that incorporated river runoff as well as a range of scenarios for how greenhouse gas emissions may change during the next several decades. Their findings showed that for a majority of the world, the frequency of 100-year flood events would increase, but most especially in parts of Southeast Asia and Africa, where countries are not as capable of coping with such flooding.

For many rivers, the study showed that the 100-year flood, which currently has a 1 percent chance of occurring in any given year, would occur far more frequently in the coming decades — on the order of 10 to 50 years, the report found. 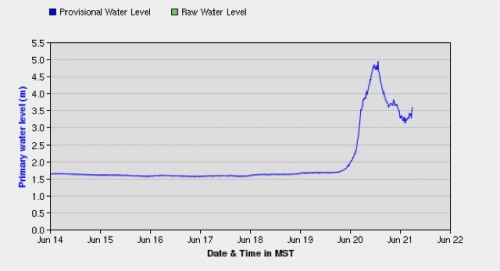 The study did not project a major increase in flood risk in North America, where the major flooding is now occurring, and the researchers noted mixed signals from the models regarding Central Europe, which is only beginning to recover from the flooding during the past several weeks. However, the authors cautioned against focusing too closely on regional projections.

“Because of uncertainty, it is difficult to clearly mention “this region will be like this, that region will be like that,” the researchers said in a statement to Climate Central. “Projection is different than prediction. However, if the warming unfortunately proceeds, the flood risk on a global scale becomes larger.”

The study clearly showed not only a rising risk of river flooding, but an increase in the population at risk of flooding as well. 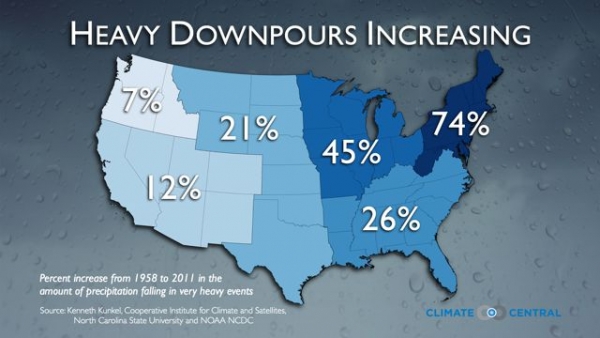 Heavy precipitation extremes, which sometimes result in river flooding, have been increasing in much of the U.S. east of the Mississippi River.
Credit: Climate Central.

By overlaying simulated flooded area on top of population data, the researchers were able to estimate the size of the population at risk of flooding. According to the study, global warming-related changes in flood risk could put between 27 and 93 million people in jeopardy of annual flooding, depending on the amount of warming that occurs.

That includes residents of Calgary, who as they wait to reclaim their city, realize there is no strength in numbers as river-flooding impacts rise in tandem with global warming.