LONDON  – The loss of Arctic sea ice is bad news for the Pacific walrus, and for polar bears: the walrus has further to swim to dig for clams on the sea floor, and the polar bear has less chance of catching seals. But the real problems begin at the base of the food chain.

Since the end of the last century, more than two million square kilometers of sea ice have disappeared, and the loss of summer ice is accelerating. Researchers call this “a stunning loss of habitat for sea ice algae and sub-ice plankton which together account for 57 percent of the total annual primary production in the Arctic Ocean.” 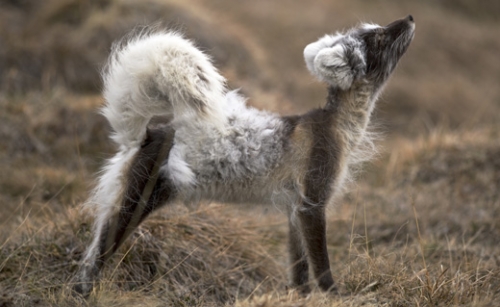 The Arctic fox is one of the species likely to be affected by genetic isolation as the ice melts.
Credit: Jeff Kerby, Eric Post lab, Penn State University

Eric Post, a biologist at Penn State University in the U.S., and colleagues report in Science that the seasonal timing of the ice algae bloom is critical to the successful reproduction of the zooplankton copepods (small crustaceans) that graze on the algae, and the bloom in phytoplankton that follows the normal seasonal retreat of the sea ice delivers food for the copepod offspring.

These two “pulses” in productivity in the Arctic are the basis of the food web for all the higher creatures. The copepod explosion provides breakfast, lunch and supper for whales, seabirds, small fish, crustaceans and so on.

But the fact that the total area under ice each summer has been shrinking at 86,000 square kilometers a year, and the annual ice melt season has been extended by at least 20 days, could have profound consequences for the entire ecosystem, and for the big, warm-blooded creatures at the top of the food chain.

“Our team set out to explore the domino effects of sea ice loss on marine mammals, as well as on land-dwelling species living adjacent to the ice,” said Post. The ice shelf is habitat for large mammals: as the ice thins and dwindles so does the habitat, and therefore the hunting opportunities.

Walrus forage for food in shallow waters, and use the sea ice to rest, and to dive from, between foraging. As the ice melts and retreats from the shoreline the ice edge moves over deeper waters, and the walrus community increasingly has to crowd together on the shoreline rather than the ice, making the spread of infection easier, and increasing the dangers of trampling for the young.

As the ice retreats, polar bears have less access to seal populations – and supplies of blubber – and they too have begun to mingle populations: there have been increasing reports of hybridization with grizzly bears. 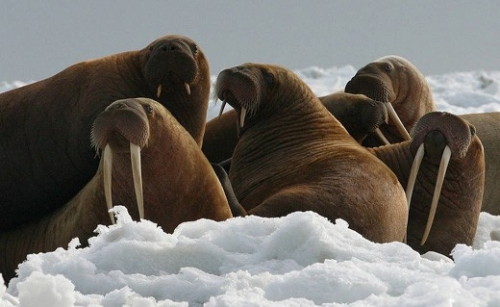 As the ice melts, walrus’ crowd together on the shoreline, making the spread of infection easier, and increasing the dangers of trampling for the young.
Credit: Joel Garlich-Miller/U.S. Fish and Wildlife

Because sea ice in Arctic Canada is decreasing, there is a greater likelihood of contact between eastern and western Arctic seal populations, and a greater chance that phocine distemper virus will spread from the eastern seals to the western population.

Sea ice loss could affect the populations of Arctic fox and wolf – because the loss of ice will increase genetic isolation – and the warming of the land surfaces in the Arctic is beginning to alter the vegetation, with consequences for caribou and other grazers.

Another important consequence of sea ice loss is a change in the Arctic albedo – the measure of radiation that normally bounces off the ice and back into space, keeping the Arctic cold.

In Nature Climate Change Aku Riihelä of the Finnish Meteorological Institute in Helsinki and colleagues report that they looked at satellite data from 1989 to 2002, during the summer months, for both open water and sea ice regions of the Arctic.

They found that all albedo trends show a significant reduction, which is another way of saying that more sunlight is being absorbed into the land and ocean of the Arctic – which will accelerate the rate of warming and the loss of further ice.

The consequences of this for the whole Arctic ecosystem will be considerable, warns Professor Post. As the seas open, they become accessible to shipping traffic and drilling rigs, and any increase in this could affect both terrestrial and marine creatures, among them the bowhead whales and the Pacific walrus.

“By viewing sea ice as essential habitat and a substrate for important species interactions, rather than as a lifeless blank surface, its loss as a result of warming becomes a rather stunning prospect,” he says.