The worldwide impacts of a rapidly warming Arctic could cost the global economy an estimated $60 trillion, nearly equal to the entire global economy in 2012, according to a new study. That report, published Wednesday in the journal Nature, is the first to analyze the potential economic costs of rapid Arctic warming.

The study bluntly warns that the tendency for policymakers to focus solely on the benefits of an increasingly open Arctic Ocean — like increased mining, oil and gas drilling, and maritime shipping — misses the longer-term “economic time bomb.” The Arctic region, the study said, is “pivotal” to the functioning of the global climate system, and disrupting it will not come cheaply. 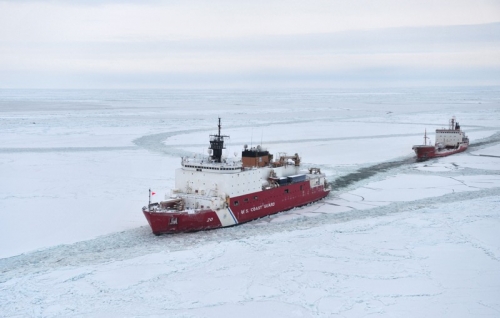 “Estimates are that the economic benefits of Arctic shipping and oil exploration will be four orders of magnitude less than the additional costs analysed here,” co-author Peter Wadhams, a professor of ocean physics at the University of Cambridge, told Climate Central.

The Arctic has been warming twice as fast as lower latitudes, and the region plays a key role in regulating the Earth’s climate system, since the bright white land and sea ice reflects an enormous amount of incoming solar energy back to space, and the Arctic Ocean helps drive global ocean currents. As sea ice and land ice melt, they expose darker surfaces below, and those surfaces absorb more solar energy, leading to warming. This process, through which Arctic warming feeds upon itself and accelerates, is known as Arctic amplification.

Last year saw the most extensive loss of Arctic sea ice ever recorded in the 34-year satellite history. When the melt season finally ended in late September, the Arctic Ocean managed to hold onto less than half of the average sea ice extent seen during the 1979-to-2000 period. So far this summer, sea ice has remained above the level of the 2012 record melt, but not by much. The past six years have had the six smallest sea ice extents since 1979, and sea ice volume has also declined precipitously.

The new study focuses on one potential impact of Arctic warming in particular — the release of methane gas, which is a potent global warming agent, from frozen deposits known as “methane hydrates,” located beneath the East Siberian Sea. Studies have projected that as the ocean temperatures warm in response to the loss of sea ice, some of the methane will be released into the atmosphere. Methane is a more potent, but shorter-acting, global warming gas when compared to carbon dioxide (CO2).

For the Nature study, researchers calculated the average global economic consequences of the release of 50 gigatonnes of methane over the course of one decade — from 2015 to 2025 — from thawing undersea permafrost. They found that the costs would vary between $10 trillion to $220 trillion, depending on the emissions reductions that are put in place during the same period for other greenhouse gases, such as CO2.

The mean estimate of $60 trillion is close to the estimated value of the entire global economy in 2012, which was $70 trillion, the study said.

The economic model used in the study, which is an updated version of the model used in the 2006 Stern Review on the Economics of Climate Change, found that the costs of Arctic warming overwhelmingly outweigh the potential benefits.

To arrive at their economic impact estimates, the researchers ran the integrated assessment model 10,000 times under two different emissions scenarios, out to the year 2200.

The study found that the “methane pulse” would add an extra 15 percent of the average total projected cost of climate change impacts, which are about $400 trillion in total.


Chris Hope, a coauthor and policy modeler at Judge Business School at the University of Cambridge, told Climate Central that while the model results have a large range of uncertainty, the methodology has been through a rigorous peer review process.

“We’re careful all the while to talk about the mean of results,” he said.

Hope said that regardless of whether the actual economic impacts of Arctic warming wind up being on the low end or high end of the scale, the bottom line is that focusing only on the benefits of Arctic warming, as policymakers have tended to do, is problematic at best.

“People have so far concentrated on these very small benefits, in global terms, and have rather ignored what these global impacts are likely to be,” he said.

For example, at a meeting on Arctic sea ice melt in Washington last week, top U.S. scientific and military officials discussed how to manage the increased activity in the region, but the economic, and even environmental downsides to Arctic warming were not raised. 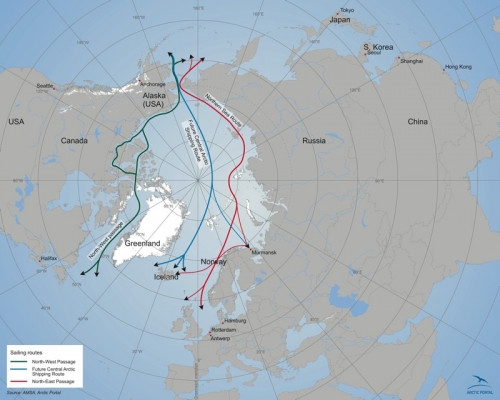 One cautionary note is that the study only examines the consequences of a release of a significant amount of methane from the East Siberian Sea off the northern coast of Russia. That means that when other aspects of Arctic warming are factored in, such as ocean acidification and the possibility that Arctic warming is altering weather patterns in the northern hemisphere that could bring more extreme events, the costs would climb even further. Also, the likelihood of a large methane pulse is a hotly debated issue in the scientific community. For this study, the researchers relied on methane-release estimates produced from a separate study.

“It's neither a pessimistic nor an optimistic scenario but a reasoned estimate provided by the person who has studied this seabed region most intensively,” Wadhams said of the methane release scenario.

The authors argue that policymakers are discussing Arctic issues in forums that are too parochial, such as the Arctic Council, which is a cooperative body comprised of the eight Arctic nations and several observer countries

“The Arctic is driving so much of our climate system and will really have economic impacts . . . globally,” said co-author Gail Whiteman, a professor at Erasmus University in Rotterdam. “It’s not just an issue for Arctic countries to say 'yeah, who owns those shipping rights or who owns those oil and gas drilling rights.' ”

The study recommends that the World Economic Forum, whose annual gathering in Davos, Switzerland, draws a who’s who list of world leaders and business executives, put economic modeling of Arctic climate change into its Arctic agenda, which it recently launched.