A strange thing is happening in the Arctic. After dipping to its second-lowest extent on record in September, sea ice has struggled mightily to rebound in October.

Freakishly mild weather coupled with a warmer-than-normal ocean are in large part responsible for the great sea ice slowdown of 2016. It’s just the latest piece of evidence that 2016 is on another level when it comes to signs that the climate is changing.

The Arctic Ocean seems to have forgotten it's supposed to be freezing up right now. pic.twitter.com/3DfFtiToGy

The turn of the calendar toward winter and rapidly dwindling daylight usually equate to the growth of sea ice in the Arctic. After hitting a minimum in early September, sea ice regrowth got off to a blistering start. But it’s speedy recolonization of the Arctic Ocean slowed to a crawl in October.

Preliminary data published by the Japanese space agency and visualized by Zach Labe, a PhD student at the University of California, Irvine, show that it’s the slowest regrowth on record. That includes a period at the end of October where it appears sea ice didn’t grow at all. 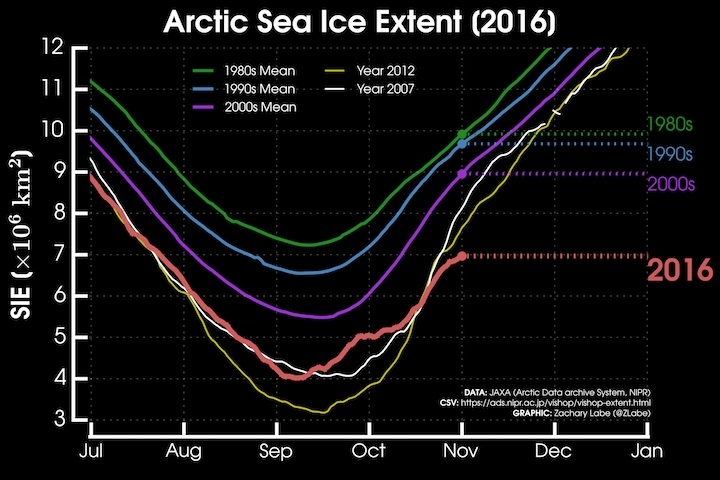 Large areas of ice were missing at the end of October in the western Beaufort and Chukchi seas north of Alaska and the Kara and Barents seas that sit above Russia. Ted Scambos, a scientist at the National Snow and Ice Data Center, said it looks like sea ice is about 232,000 square miles below the previous record and 965,000 square miles below the October average. For perspective, the latter is an area slightly larger than the eastern half of the U.S. (and the former is roughly the size of Texas).

The main reason for the slow growth is it’s been relatively warm by Arctic standards almost all month. The Arctic Ocean has been an astonishing 7°F above normal on average in October (again, this is based on preliminary data) with a number of areas much warmer than that with temperatures ranging up to 18°F warmer than usual. 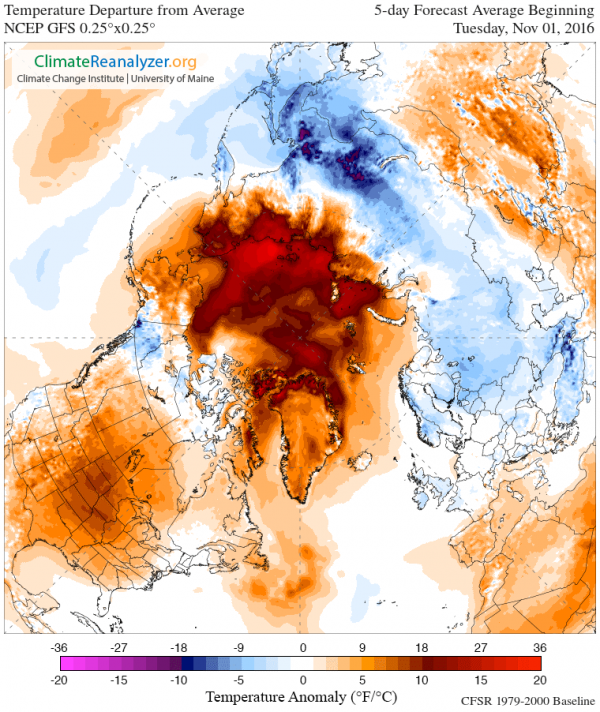 The temperature forecast for the next five days in the Arctic shows unrelenting warmth, which will continue to slow sea ice growth.
Credit: Climate Change Institute

“There is a strong high pressure over Scandinavia which is helping to transport warm air from the north Atlantic towards the Arctic,” Julienne Stroeve, a scientist at NSIDC, said. “Ocean temperatures are also quite a bit above normal especially in the Chukchi and East Siberian Sea so that is also contributing.”

It’s the latest piece of dismal sea ice news in 2016. This year set a record low for the winter maximum, besting the previous record set just a year ago. Sea ice reached its the second-lowest minimum ever recorded in the region, trailing only 2012.

The lack of ice this summer allowed the Crystal Serenity, a luxury cruise ship, to traverse the Northwest Passage. There have also been a number of other months with record low sea ice this year.

Compounding the sea ice misery in the Arctic is the disappearance of sea ice that’s been around for four years or more. That older sea ice essentially acts like the foundation of a house, helping support the growth of new, younger sea ice. It’s also thicker and harder and less prone to melting. Without it, younger sea ice is being built on shaky ground and melts more easily each summer.

And yet the foundational layer of ice is disappearing from the Arctic. In the 1980s, it accounted for about 20 percent of all sea ice. But when sea ice reached its minimum in 2016, older ice made up only 3 percent of the icepack.

Taken alone, all of this indicates 2016 may be an outlier. But looking at the big picture shows it’s right in line with recent trends. September sea ice has disappeared at a clip of 13.4 percent per decade since the late 1970s. And ships have been using the Northwest Passage since 2007; the Crystal Serenity was just a particularly high profile crossing for its exorbitant ticket prices.

Climate change will continue to crank up the heat and rapidly eat away at Arctic sea ice. That means in the coming decades we’ll likely look back at 2016 as the good old days when at least there was some old ice left.

You May Also Like:
Climate on the Ballot in Washington and Florida
Drought, Climate Impact Fall Foliage in Complex Ways
Shipping Industry Postpones Climate Plan Until 2023
World’s New Marine Protected Area is a Big Climate Win