While balmy hints of spring melt piles of snow in the eastern U.S., the impending end of winter marks peak season for Arctic sea ice. But this year, that winter maximum area is currently on track to hit a record low since satellite records began in 1979. 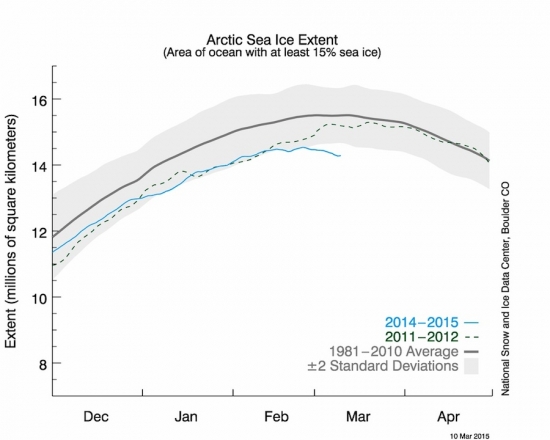 The area of the Arctic covered by sea ice during the winter of 2014-2015. In March, that area has hit such low levels that they could set a seasonal record if they persist.
Click image to enlarge. Credit: NSIDC

What that low-ice mark means for the spring and summer melting seasons is unclear, but the milestone would still be notable in the global warming-fueled cycle of Arctic sea ice decline.

Sea ice extent is crucial to the Arctic's ecology and economy, affecting wildlife habitats, weather patterns, and shipping lanes. Sea ice is a key part of the habitats of animals like polar bears and walruses, as well as fish and other creatures that live below it. When it is missing it can make it dififcult for some of the animals to find food.

For humans, ice-free areas of water are prime real estate for oil drilling and shipping and an Arctic low on ice would open the region to more of both, a controversial proposition. There has also been research that indicates the disappearance of sea ice, along with the broader warming of the Arctic, is affecting weather patterns over North America, Europe and Asia, though there is still much work to be done to fully explain such a connection.

The cap of sea ice that covers the Arctic Ocean waxes and wanes with the seasons, with ocean water forming ice as the sun descends below the horizon in the autumn and plunges the region into the perpetual darkness of winter. As the sun re-emerges in spring, the ice can grow no more and melting begins. The ice typically reaches its maximum area in March and its minimum in September.

Global warming triggers a self-reinforcing downslide in the area the ice covers, as well as how thick the ice is. Warming Arctic temperatures triggered by the buildup of greenhouse gases in the atmosphere cause more ice melt, which exposes more of the open ocean. Whereas the bright white ice reflects the sun’s rays, the dark ocean absorbs them, causing even further warming and melt.

Those patterns have played a role in shaping this winter’s extent. Temperatures in two areas, the Sea of Okhotsk (on the eastern coast of Russia) and the Bering Sea (between Russia and Alaska), have been 7 to 11°F above normal, keeping ice levels there well below normal. That heat is part of a broader area of unusually warm temperatures that extends from Europe across Asia and down through the western U.S. 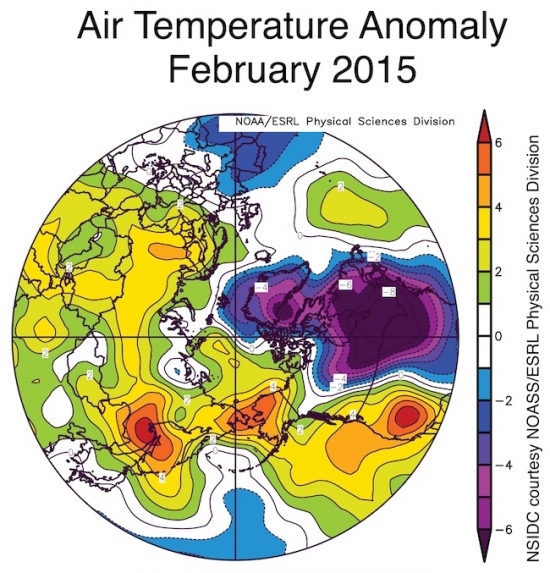 Temperature patterns across the Northern Hemisphere, including areas of unusual warmth extending across Europe, Russia and western North America. (The perspective is looking down, with the North Pole at the center.)
Click image to enlarge. Credit: NSIDC

With that area so far below normal, overall Arctic sea ice extent sits well below the average range for this time of year. There’s still time for a late-March surge in sea ice formation, as has happened in recent winters, said Julienne Stroeve of the NSIDC, but ocean temperatures are too warm to make that likely.

That means there’s a good chance sea ice area will stay at a record-low level as it begins its warm season retreat.

What that might mean for summer and any potential new record low at the end of that season is unclear, as research and observations have shown that winter area isn’t always a good indicator of how the summer will unfold.

But if sea ice levels don’t surge and instead begin to drop off or stay flat, that would indicate the winter maximum occurred earlier than normal, and “this is also bad news because it means that the melt season will be longer, allowing more opportunity for ice to melt,” Francis said.