It’s been a winter for the books in the Arctic. Capping off a season of sustained, mind-boggling warm weather and stunted sea ice growth, the annual Arctic sea ice maximum hit its lowest level ever recorded. That marks the second straight year that the winter maximum ice extent set a record low. 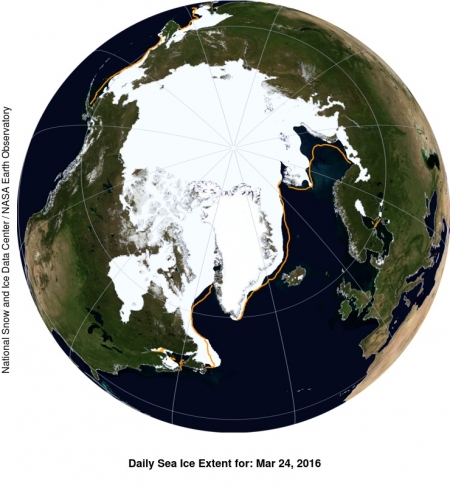 “I’ve never seen such a warm, crazy winter in the Arctic,” Mark Serreze, director of the National Snow and Ice Data Center, said in a statement. “The heat was relentless.”

Along with other indicators like global average temperature and sea level rise, the record-setting sea ice cover is a key example of how much climate change is affecting the planet. Diminished sea ice can impact the ability of Arctic species like polar bears and walruses to find food, and could impact the weather across North America, Europe and Asia, though that connection is still contentious.

“The Arctic is in crisis. Year by year, it’s slipping into a new state, and it’s hard to see how that won’t have an effect on weather throughout the Northern Hemisphere,” Ted Scambos, an NSIDC lead scientist, said in a statement.

The NSIDC announced on Monday that Arctic sea ice hit its maximum extent for the winter on March 24, when it averaged 5.607 million square miles. That beat last year’s record low of 5.612 million square miles, set on Feb. 25, 2015, by 5,000 square miles or just a bit smaller than the area of Connecticut.

Last year’s peak came earlier than is typical, while this year’s was later than the average peak time. That late peak date sets up a shorter-than-normal ice melt season this year.

Overall, though, Arctic sea ice has seen a clear decline since satellites first began monitoring it in 1979. Since that time, winter sea ice extent has dropped 3.2 percent per decade, while the summer minimum has seen an even steeper drop of 13.7 percent per decade.

That decline is linked to the rapid warming of the region, which is heating up twice as fast as the rest of the globe.

This winter, that warmth reached astounding levels, with air temperatures over the Arctic Ocean ranging from 4°F to 11°F (2°C to 6°C) above average in nearly every region.

That incredible warmth helped contribute to January and February successively setting the record for the most anomalously warm months globally in more than 130 years of record keeping.

You May Also Like:
Pacific Ocean Pattern Could Predict U.S. Heat Waves
Climate Change Is Coming For Your Maple Syrup
If a Power Plant Is Built in U.S., It’s Likely to be Renewable
Renewable Energy Investments Set a Record in 2015