The Fourth of July weekend wasn’t just about fireworks and cookouts, it also marked the end of a key period of summer melt in the Arctic that can determine how low sea ice goes for the year. The floating ice cap has been on a steady downward trajectory for decades, thanks to global warming, and in recent years it has hit record lows with the added influence of seasonal weather. 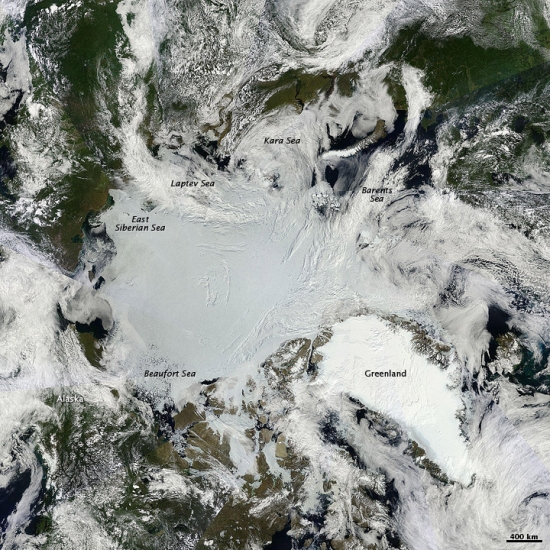 The various seas that make up the Arctic Ocean as seen by satellites in July 2011.
Click image to enlarge. Credit: NASA

This year, the usual period where summer melt ramps up — from mid-June to early July — saw only modest declines, so it’s unlikely any records will be broken. But even a non-record annual low nowadays is far lower than it was decades ago, before warming really started to kick in.

“It is too early to bet on 2015 hitting a historical low sea ice extent, but it is quite certain that 2015 will rank in the lowest years,” François Massonnet, a post-doctoral researcher at the Université Catholique de Louvain in Belgium, said in an email.

The area of the Arctic Ocean covered by ice naturally waxes and wanes with the seasons, with the cap growing throughout the cold months and then melting again as the sun’s rays return come summer. Sea ice hits its annual maximum extent in March and its minimum in September.

The overall warming of the planet, which is happening at a faster pace in the Arctic, has caused steady declines in both the max and min over recent decades (as well as an overall thinning of the ice), ranging from 10 to 15 percent per decade depending on the season. This sea ice retreat has major implications for regional wildlife, which can depend on the sea ice for hunting food; the livelihoods of indigenous cultures; and commerce, including oil exploration and shipping.

But that background warming driven by the buildup of greenhouse gases in the Earth’s atmosphere isn’t the only factor that affects what happens to Arctic sea ice from year to year and season to season. Weather patterns can act over that trend, sometimes reinforcing it and sometimes counteracting it. In 2012, an intense storm helped drive the summer extent to a record low, whereas in other years, weather has had less impact and the summer melt has fallen in line with the decades-long decline.

There are many ways weather can influence sea ice melt: warm temperatures can cause the surface to melt, creating ponds that absorb more of the sun’s rays and fuel even more melt; cloudless skies can let more sunlight shine on the ice; and winds can push the ice around, into the path of warmer waters.

Weather becomes particularly important during the period from mid-June to early July, “because that’s when there is maximum sunlight, so the largest potential amount of energy going into the system,” Walter Meier, a researcher at NASA’s Goddard Space Flight Center in Greenbelt, Md., said in an email.

This summer seemed to start off on a rapid pace of melt, with warm air flowing in over the Beaufort and Barents seas, Massonnet said. In fact, for a period of several days in May, sea ice extent was at record low levels for that time of year. 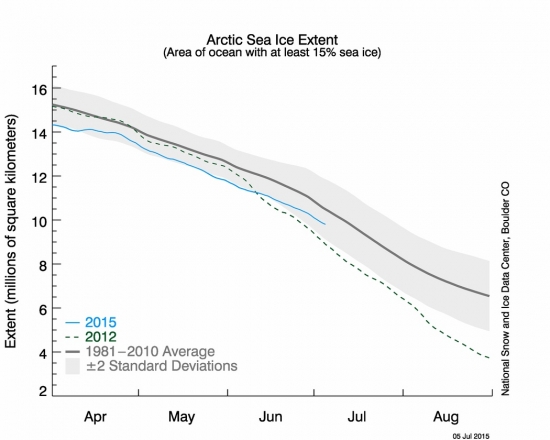 The daily trend in Arctic sea ice extent from April through early July, 2015, as compared to the 2012 record low and the long-term average.
Click image to enlarge. Credit: NSIDC

But in June, when the melt typically really picks up, weather patterns shifted and the rate of melt eased. This was partly due to the fact that “one of the few cool areas in the world actually for the first few months of the year was Greenland and northeastern Canada” and so adjacent areas of the Arctic Ocean got off to a slow start, Ted Scambos, a senior scientist with the National Snow and Ice Data Center in Boulder, Colo., said.

That trend could shift again in the coming weeks, as Siberia and Alaska have seen “very warm conditions, unbelievable actually,” Scambos said. “That air has to be pushing out onto the sea ice.”

Because of this shift, he and his colleagues are watching for signs of more rapid retreat in July.

But where September will ultimately end up is still unclear, and predicting the annual minimum has been a thorny problem that sea ice scientists are continually trying to solve. A consortium of groups submits a forecast each year relying on different factors that influence melt to see what best captures events in the real world.

Right now, given the melt so far this summer, it seems unlikely that 2015 will break 2012’s record, Scambos and Meier said, but it will still be in line with the overall downward trend. As Meier put it: “Not extreme, not record-setting, but still far lower than what was normal for the 1980s and 1990s.”

Editor's note: This story was updated to provide the correct location of the Université Catholique de Louvain.