No, Arctic Sea Ice Has Not Recovered, Scientists Say

Arctic sea ice extent has reached its seasonal minimum, dropping to the sixth-lowest level in the 35-year satellite record. This year’s melt represents a significant gain in sea ice extent from last year — when the ice cover plummeted to a record low — but scientists cautioned that long-term trends are what is most important, with most projections still showing a seasonally ice free Arctic Ocean by the middle of the century, if not sooner. In addition, measurements of sea ice volume are at near-record low levels, indicating that the ice cover is unusually thin and vulnerable. 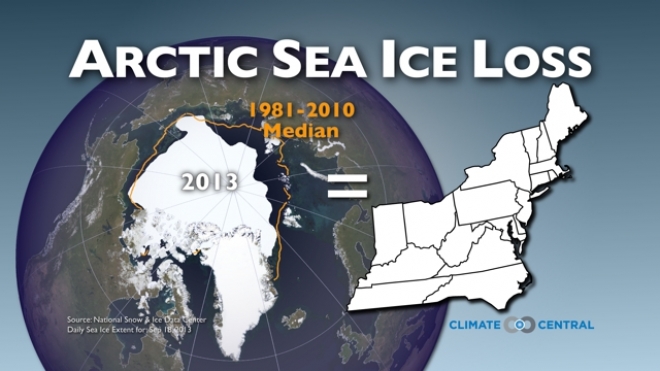 Arctic sea ice loss during the 2013 melt season was equivalent to losing the entire area of states from Tennessee to Maine.
Click image to enlarge. Credit: Climate Central.

According to data from September 18, Arctic sea ice extent was about 1.97 million square miles, which is well above the level observed on the same date last year, yet still well below the 1981-2010 average, according to the National Snow and Ice Data Center (NSIDC) in Boulder, Colo. An official announcement of the sea ice minimum came on Friday.

The long-term decline in sea ice, both in terms of the extent of sea ice cover as well as its thickness, is largely due to warming caused by human activities and natural variability, as the Arctic is warming at nearly twice the rate of the rest of the globe.

As has been the case in recent years, the sea ice at the end of the 2013 melt season is unusually thin, which makes it more susceptible to the influence of weather systems. This year, weather patterns in the Arctic were more favorable for maintaining more of the ice cover than during the past few summers, sea ice experts said. But the thinness of the sea ice also indicates that it won’t take much to reach another record low in future melt seasons.

“Basically this summer was a bit colder than we've seen the last several years,” said Julienne Stroeve, a scientist at the NSIDC said in an email interview. “Even though the ice was likely thinner this winter than last winter according to estimates from CryoSat, the relatively cooler summer was able to keep more of that thin ice around.”

Declining sea ice during the summer has spurred a dramatic increase in human activities in the Arctic, including marine shipping and oil and gas drilling. While some of that did occur this year, sea ice clogged the Northwest Passage throughout the melt season, thwarting some planned voyages through the famed waterway that opened for the first time in modern human history in 2007. The Northern Sea Route along the northern coast of Russia did open for a period in September, the NSIDC said.

Click on the interactive above to see 2013 sea ice extent compared to other recent years.

For much of the 2013 melt season, low pressure dominated the Central Arctic Ocean and Greenland, leading to cloudier and cooler conditions compared to previous years that had greater declines in sea ice. Average air temperatures were below average over most of the central Arctic Ocean and Greenland this summer, a dramatic contrast to the much warmer-than-average conditions that prevailed during the six previous years.

The summers of 2007 to 2012 were dominated by a weather pattern that helped transport warm air into the Arctic, with a high pressure area over the Beaufort Sea and Greenland, and low pressure over Eurasia, the NSIDC reported.

However, even with the cooler conditions this summer, sea ice extent still dropped into the top 10 lowest on record.

“. . . We still ended up as sixthh lowest, so it reflects that even with a weather pattern that is not favorable for ice loss, you still have low ice conditions — certainly no rebound to conditions in the 1980s/1990s,” Stroeve said. “I suppose if we now had several summers in a row like this one, we could temporarily rebuild the icepack.”

Mark Serreze, the director of the ice center, said observations of sea ice trends and computer model projections show that there can be large year-to-year variability in sea ice extent, which is overlaid on top of the sharp long-term reduction in sea ice cover. “The pattern we have seen over the past several decades is one of a downward trend in September ice extent, with pronounced ups and downs from year to year reflecting the strong natural climate variability in the Arctic. This year, that natural variability helped to preserve some ice. We'll have to wait and see what happens next year,” he said in an email.

“We shouldn't focus too much on the year-to-year variations; it's the long-term trend that is important. All climate models participating in the next IPCC report show that the Arctic will become ice-free in summers as temperatures continue to warm in response to rising concentrations of greenhouse gases,” Stroeve said. “Models also show periods of temporary recovery on top of that overall downward trend, recoveries that can last for several years.”

Walter Meier, a scientist at NASA’s Goddard Space Flight Center in Maryland, told Climate Central that sea ice really didn’t recover much at all, when data in addition to ice extent is considered.

“The long-term trend is still strongly downward, and this year's relatively higher extent will not significantly change that,” Meier said. ”In addition, the remaining ice is quite thin, so there isn't much change in total mass or volume from last year — in other words, the turnaround in mass/volume is non-existent.”

Data from the European Space Agency’s CryoSat mission, has shown a significant decrease in the volume of winter and summer sea ice — a measurement that incorporates ice extent and thickness — during the past three years, possibly to a new record low at this point.

“I would say that this September's sea ice is like September for a lot of baseball teams. Winning a couple games in a row feels good, but it doesn't change the fact they're still way behind the first place team with no chance to make the playoffs,” Meier said.