While the steady disappearance of sea ice in the Arctic has been one of the hallmark effects of global warming, research shows it is not only covering less of the planet, but it’s also getting significantly thinner. That makes it more susceptible to melting, potentially altering local ecosystems, shipping routes and ocean and atmospheric patterns. 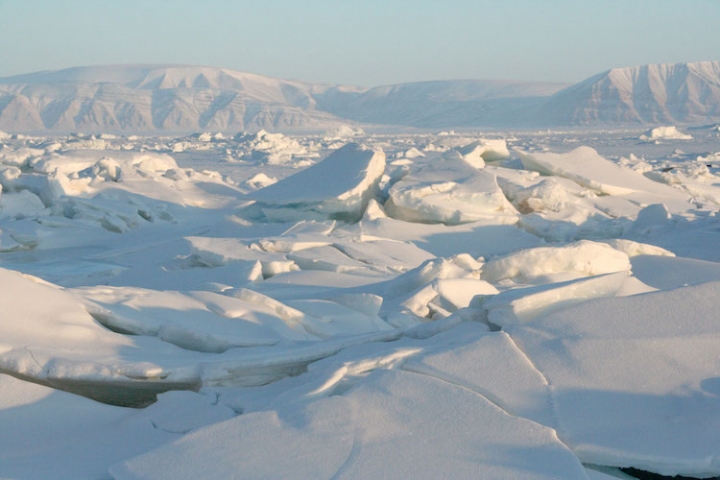 New data compiled from a range of sources — from Navy submarines to satellites — suggests that thinning is happening much faster than models have estimated, according to a study aiming to link those disparate data sources for the first time. University of Washington researchers Ron Lindsay and Axel Schweiger calculated that in the central part of the Arctic Ocean basin, sea ice has thinned by 65 percent since 1975. During September, when the ice reaches its annual minimum, ice thickness is down by a stunning 85 percent.

The information is key in determining when parts of the Arctic may become ice-free for at least part of the year in the coming century.

While the ice’s extent is readily visible from satellites, ice thickness has been more difficult to measure, and it is arguably the more important dimension in measuring the volume of ice being lost. In estimating ice thickness, satellites must try to gauge thickness differences of just a few feet from hundreds of miles above the planet’s surface. “It’s a tricky business,” Lindsay said.

But several satellites do take those measurements, as do various airborne missions, anchored moorings and submarines passing below the ice. Each of these instruments uses a different method, though, and produces data that isn’t always easy to sync with the others.

In the new study, Lindsay and Schweiger tried to resolve some of those differences in what Lindsay called “an attempt to get all the ice thickness measurements into one place.” The goal, he said, is “to get a broad picture of what the sea ice is doing in the Arctic Ocean that is based more on observations than on a model.”

What they found was that annual average sea ice thickness over the entire Arctic basin was decreasing about 18 inches per decade since 2000. 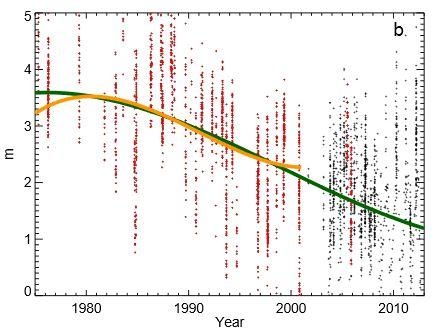 The declining trend in sea ice thickness since 1975 (the green line) as compared to that calculated in a previous study (the orange line) using data from submarines (the red dots) and other sources.
Credit: R. Lindsay/Univ. of Washington

Since 1975, the annual average thickness in just the central part of the basin had dropped from about 11 feet to 4 feet  — a decline of 65 percent. That was nearly double the 36 percent decline that a previous study calculated over the period from 1975-2000.

The study’s estimates of the sea ice thinning, detailed in the journal The Cryosphere, were more dramatic than what most models currently show, but overall, Lindsay said, the models are capturing the decline in thickness fairly well.

Julienne Stroeve, a sea ice researcher with the National Snow and Ice Data Center in Boulder, Colo., said in an email, “It would be great to have a long-term sea ice thickness dataset,” like the one Lindsay and Schweiger compiled, but there are inherent and varying biases in the data that make conclusions from such combined data hard to trust. Stroeve was not involved in the new study.

In the study, Lindsay and Schweiger acknowledge the potential for error in the combined data.

“This is just one attempt to put it together,” Lindsay said. “I think it is just a first step.”