Arctic Outbreak: When the North Pole Came to Ohio

Frigid air is marching southward from the Canadian Arctic and is poised to bring the coldest temperatures in at least 20 years to a huge swath of the U.S. The Midwest, Great Lakes, Ohio Valley, Northeast, and Mid-Atlantic are forecast to be the most severely impacted, but even parts of the South may see unusually cold temperatures between January 6-9. 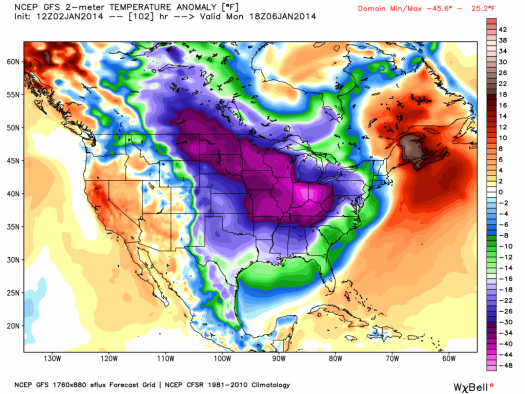 Computer model projection for Jan. 6, showing a large area of much below average temperatures (in blue and purple) across the lower 48 states. The cold air spreads east Monday night.
Click image to enlarge. Credit: WeatherBELL Analytics.

At the peak of the Arctic outbreak, temperatures may be between 20°F and 40°F below average in large parts of the continental U.S., with dangerous wind chills affecting cities like Minneapolis, Chicago, Cleveland, St. Louis, Washington, D.C., New York, and Boston. The U.S. will have the dubious distinction of experiencing the largest cold temperature anomalies of any land area in the Northern Hemisphere during the height of the biting cold. By comparison, temperatures across Greenland and much of the Arctic will be above average for this time of year, albeit still frigid.

According to the National Weather Service (NWS), the “epicenter” of the bitter cold should be the Ohio Valley, where temperatures could be 40°F below average by Monday. A storm system is expected to accompany the Arctic cold front along the East Coast Monday night into Tuesday, spreading snow and strong winds across the Lower Mississippi Valley, Appalachians, and New England, the NWS said.

The cause of the Arctic outbreak can be traced to northeastern Canada and Greenland, where an area of high pressure and relatively mild temperatures is set to block the eastward progression of weather systems, like an offensive lineman protecting the quarterback from the other team.

The atmospheric blocking is forcing a section of the polar vortex to break off and move south, into the U.S. The polar vortex is an area of cold low pressure that typically circulates around the Arctic during the winter, spreading tentacles of cold southward into Europe, Asia, and North America at times. Except this time, it’s not a small section of the vortex, but what one forecaster, Ryan Maue of WeatherBELL Analytics, called “more like the whole enchilada” in a Twitter conversation on Thursday.

How cold will it get? Computer model forecasts project low temperatures on Monday night in Washington to drop to near zero, and below zero in Boston and possibly New York City as well. Dayton, Ohio, is likely to see lows from 10-20°F below zero, and parts of Iowa could see temperatures into the minus 30s°F. In some areas of the Ohio Valley and Midwest, high temperatures may not get above zero, said Robert Oravec, a lead forecaster with the National Weather Service in College Park, Md. Such severe cold means that even light winds will cause dangerously low wind chill values that could result in the rapid onset of frostbite. “Any wind is going to produce a horrific wind chill,” Oravec said.

Slideshow
Scenes from the first wave of cold and snow now affecting areas from the Midwest to the Northeast.

According to the Washington Post’s Capital Weather Gang blog, Washington has experienced lows in the single digits only five times since 1990.

The cold will feel particularly frigid to residents of the Northeast who haven’t seen a severe Arctic outbreak of this magnitude in more than a decade, Oravec said. “1994 is the last one that comes to mind when we talk about big Arctic outbreaks and a lot of below zero temperatures,” he said in an interview. Washington saw a low of minus 4°F on Jan. 19, 1994, and it has not been that cold since then. 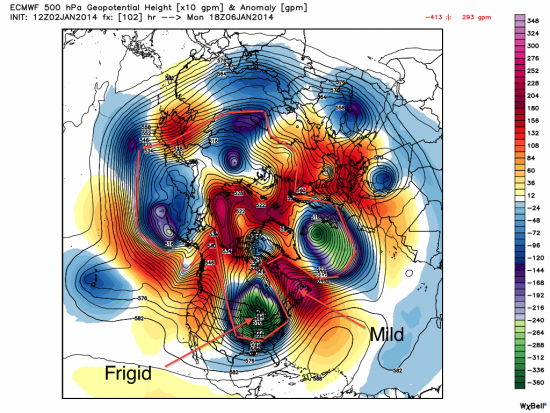 Computer model projection showing the location of the polar vortex (outlined in orange) and areas of below average temperatures (green and blue) and above average temperatures (orange and red), as indicated by the height of atmospheric pressure levels. The annotations show the cold temperature anomaly in the U.S. and mild anomalies across the Arctic.
Click image to enlarge. Credit: WeatherBELL Analytics.

Overall, winters in the U.S. have been warming in recent years, in step with global trends. The fastest-warming states since 1970 — Minnesota, North Dakota, Wisconsin, Vermont and South Dakota — have been among the most severely affected by recent cold snaps, and stand to shiver through the upcoming event.  However, recent winters have seen sharp swings in temperatures and major snowstorms affecting the East Coast of the U.S. and Europe, with some research indicating this may be partially linked to the rapid melt of summer sea ice in the Arctic.

Oravec expects the Weather Service to issue wind chill warnings and advisories for a huge expanse of real estate, from Minnesota to Missouri and Maine, for the Monday-through-Wednesday timeframe.

The Arctic surge next week follows a frigid air mass that is now affecting some of the same areas, along with heavy snow. The overnight low temperature in Babbitt and Embarrass, Minn., was a teeth-chattering minus 47°F on Jan. 2. That cold help set a 117°F temperature gradient between the northern tier of the country in International Falls, Minnesota (minus 34°F), and southern Florida (83°F), as of 11 a.m. on Thursday.

A snowstorm kicking off the first Arctic outbreak in New England is expected to drop up to 18 inches of snow Thursday night and Friday before strengthening into a large ocean storm in the North Atlantic.