Arctic sea ice appears to have reached its annual summer low point, and, as expected, it is the fourth lowest in the four decades of record-keeping, the National Snow and Ice Data Center in Boulder, Colo., announced Tuesday.

While summer ice melt is part of the normal seasonal sea ice cycle, the record lows reached in recent years are a clear sign of the warming-driven decline in Arctic sea ice. All 10 of the lowest sea ice extents on record have occurred since 2005. 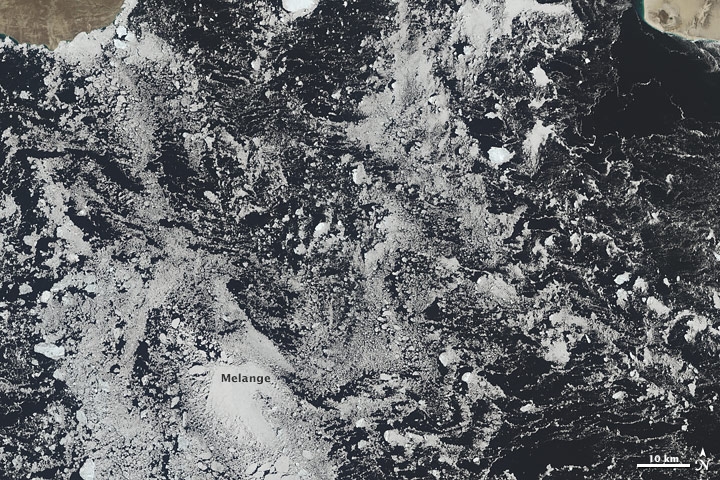 The Northwest Passage of the Arctic as seen on Aug. 31, 2015. While not completely ice-free it was considered open for several weeks this summer, which is happening more often and for longer with Arctic warming.
Credit: NASA

The decline in the area of the Arctic Ocean covered by sea ice, as well as the thinning of this ice, has impacts on the overall Arctic environment. It is imperiling native communities as ocean waters increasingly eat away at coastlines, as well as Arctic species that depend on the sea ice to help them hunt prey. The disappearance of the ice is also leading to increased shipping traffic and oil exploration that could have major economic and ecological impacts.

The annual minimum comes as NASA data reveals that August 2015 was the second warmest August on record, increasing the odds that the year will be the warmest on record globally.

Over the summer, sea ice melt had periods where it surged ahead and then leveled off. The decline was rapid in late July and remained steady through August before bottoming out in mid-September.

Just how low the annual minimum goes is not only influenced by the overall warming trend, but also by summer weather systems. For example, the 2012 record minimum came during the remarkable summer melt season of 2012 and was fueled in part by summer storms that moved ice into warm waters.

This year, the general atmospheric pattern over the Arctic favored a low minimum extent. High pressure dominated, which tends to bring sunnier and warmer weather. It also tends to mean that ice gets compacted into a smaller area.

It is possible that a shift in wind patterns could push this year’s extent lower than that seen on Sept. 11, the NSIDC said. This happened in both the 2005 and 2010 melt seasons.

The southerly route of the Northwest Passage — originally discovered between 1903 to 1906 by the Norwegian explorer Roald Amundsen — was open in late August and early September, and the Northern Sea Route along Russia has been open for most of the month. That route, along with the Arctic as a whole, has seen an uptick in ship traffic in recent years.

The ice will now begin its annual freeze-up that will continue through the winter, reaching its annual peak likely in March (which hit a record low this past winter). This growth does not indicate any recovery of the sea ice, though, it is simply part of the natural annual cycle.

Sea ice extent is down across all seasons since satellite monitoring began in the late 1970s, with decreases ranging from 10 to 15 percent per decade depending on the season.

You May Also Like:
Odds Increasing That 2015 Will Be Warmest Year
In California, a Paltry Snowpack Not Seen in Centuries
The Grand Canyon From the Stratosphere is Amazing
Firestorm Leaves ‘Mass Destruction’ in California