The Arctic is a bastion of cold, blustery weather. But in the latest sign of how quickly changes are happening, new research published this week shows that the Arctic has seen more frequent bouts of warm air and longer stretches of mild weather.

The new findings show that while warm snaps have occurred even as far as back as the 1890s, a massive shift is afoot in the region, which is warming twice as fast as the rest of the world.

The average and maximum winter temperatures (left and center) as well as the probability of minus-10°C (14°F).
Credit: Graham et al., 2017

The North Pole region has been ground zero for these changes. Since 1979, the number of warm events has doubled and the number of days with mild air has tripled. There are now 21 days of mild weather at the North Pole in an average winter compared to just seven mild winter days at the start of record keeping.

An international team of scientists used data from buoys, land and a ship mired in winter ice in 2015 — as well as historical records from a 19th century expedition — as the basis for the new study, published Tuesday in Geophysical Research Letters.

They defined a “warm” event as any time when the temperature rose above 14°F (minus-10°C). That’s chilly by winter standards for most regions of the globe, but is significantly warmer than the minus-22°F (minus-30°C) temperatures that are the norm for the Arctic in winter. They also looked at other extremes up to 32°F (0°C).

“In recent years, the frequency of these events and their duration have increased, together with the peak temperature recorded during these events,” said Robert Graham, a researcher at the Norwegian Polar Institute who led the study.

Graham and his colleagues also looked at the Pacific side of the region and found an uptick in warm winter days and events, albeit at a lower magnitude than the North Pole.

Julienne Stroeve, a sea ice expert at the National Snow and Ice Data Center, said the change is an important one to note and could help further research on changes in winter ice pack. 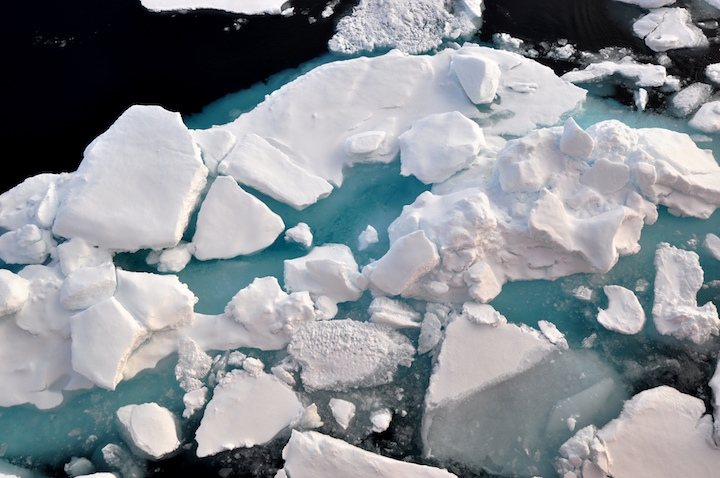 An ice floe slides down the starboard side of the Coast Guard Cutter Healy.
Credit: Patrick Kelley, U.S. Coast Guard

The North Pole sits on the Atlantic side of the Arctic, an area that has seen more storms come swirling up from the Atlantic, dragging warmer air along with them. Graham said that was one reason for the larger increase in the length and duration of mild winter days there. Warm water is also pushing deeper into the Arctic Ocean from the Atlantic, further changing the region.

Background temperatures have also been rising faster there. The North Pole region has warmed 2.3°F (1.3°C) per decade since 1979, a trend largely driven by climate change. Though the new study doesn’t tease out whether the increase in warm days is due directly to climate change, it’s part of a huge pile of evidence of how rising carbon pollution is altering the Arctic faster than the rest of the world.

“While surface temperature data from the Arctic are less reliable than elsewhere, the authors tap into a variety of different measurements that all tell the same story,” Jennifer Francis, an atmospheric scientist at Rutgers University, said. “The trends go hand-in-hand with dwindling sea ice and thawing permafrost.”

Winter sea ice has hit a record low three years in a row and the summer minimum has been declining by more than 13 percent per decade since the late 1970s. That’s a sign of how warm the Arctic is becoming, creating a feedback loop that ensures ever more warming because dark, open water absorbs more heat than white sea ice.

Francis said it’s still an open question of whether climate change is making the Arctic stormier, but she noted that “as the globe warms, the atmosphere gains more water vapor, so when one of these storms does enter the Arctic, it has more moisture to draw from.”

You May Also Like:
These Images Show Just How Big the Larsen C Iceberg Is
The Larsen C Iceberg Finally Broke Away. Now There’s a Trillion-Ton Iceberg Adrift
This Map Shows Warming’s Fingerprints on Weather
The West Is on Fire As Heat Records Fall