The Arctic Has Been Crazy Warm All Year. This Is What It Means for Sea Ice

Melt season has begun in earnest in the Arctic. Scientists will spend the next few months watching sea ice turn into open water until the ice pack hits its nadir in early fall.

The vagaries of the weather and ocean currents will play a major role in determining where this year’s Arctic sea ice minimum ranks. But the steady drumbeat of climate change ensures that it will likely be among the lowest on record. 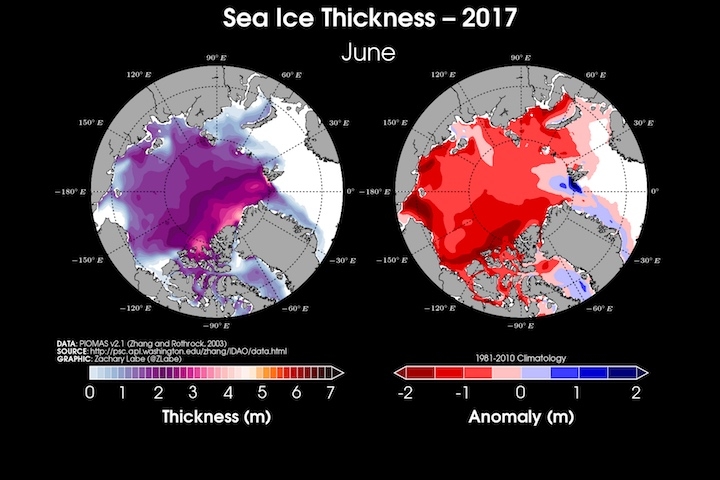 New data from the National Snow and Ice Data Center show that sea ice extent was at its sixth-lowest mark for June. Sea ice was missing from 348,000 square miles of the Arctic Ocean, an area about three times the size of Arizona.

After the string of record- or near-record low months late last year and early this year, the sixth-lowest extent might sound like an improvement. It’s not. As of July 2, sea ice extent was on par with 2012, a year that went on to set the mark for lowest Arctic sea ice minimum on record. That year, a major storm in August helped churn the ocean and smash ice to smithereens.

There are signs this year’s ice would struggle to sustain itself if a similar scenario plays out. This winter saw a string of warm weather like no other in the Arctic. The number of freezing-degree days, a measure of how cold it’s been, are well below 2012. Fewer freezing-degree days translates to higher temperatures that cut into ice pack.

And while ice extent isn’t record low right now, ice volume is at a record-low level, according to data gathered by the University of Washington’s PIOMAS program. Thinner ice is largely driven by rising temperatures. 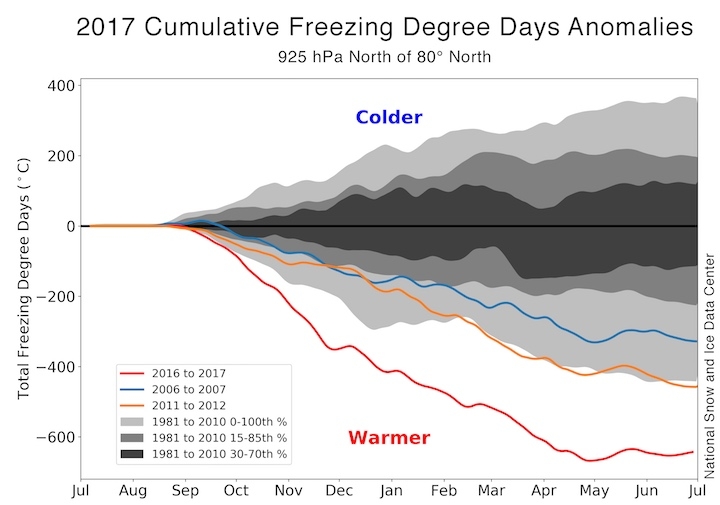 Departures from average in cumulative freezing degree days, from July 1 for a given year through July 1 of the next year.
Credit: NSIDC

“The lack of winter cold is consistent with the low spring ice thickness seen in PIOMAS,” Mark Serreze, the director of NSIDC, said in an email. “But the winter warmth is also a result of low ice extent in winter. In areas of open water in winter, there are large heat fluxes from the ocean to the atmosphere, warming the atmosphere. Hence, it’s a two-way street.”

The brittle ice covering the Arctic now is part of a long-term trend. Warming air and water have eaten away at older, more solid ice. That has in turn been replaced by younger, thinner ice more prone to melting each year.

Rising carbon emissions have caused this scenario to play out and the sea ice minimum has shrunk 13.7 percent per decade since record keeping began in the late 1970s. Scientists project that even if the world manages to cut carbon pollution enough to keep global warming below 3.6°F (2°C), the Arctic could still face ice-free summers in the coming decades.

While climate change has helped weaken this year’s sea ice, weather will ultimately be the big driver in determining how low it will go. Serreze said the weather patterns that usually drive widespread sea ice loss haven’t set up this year, but there are still two more months of summer. If 2012 is a reminder, things can change in a hurry.

You May Also Like:
The World Is on the Brink of an Electric Car Revolution
Scientists Know How Big the Larsen C Iceberg Will Be
Global Warming Tipped Scales in Europe’s Heat Wave