There was really only one weather story this week: Cold, cold, and more cold. With some snow thrown in here and there for good measure.

That cold, of course, was the result of a massive outbreak of Arctic air over most of the United States to the east of the Rockies. Climate Central took a look earlier this week at some of the crazy images that showed just how stark the sudden changeover was from mostly mild autumnal weather to frigid winter temperatures. In our weekly roundup, we revisit a couple of those and bring you some of the mind-boggling (or maybe we should say face-numbing?) images that have popped up since. Hope you’ve got your mittens handy!

The mass of Arctic air first crossed over into the U.S. on Nov. 10, “oozing” its way southward along the Rockies, in the words of one meteorologist. As it moved into Colorado, it caused a stark and sudden change from what had been extremely mild, almost summer-like conditions. In Denver, the temperature dropped a staggering 44°F in just 6 hours (and more than 30°F of that drop came in less than an hour in some spots). The city ended up shattering several records, including a 132-year-old low temperature mark of minus-13°F on Nov. 12 (the previous record was -4°F).

University of Colorado-Boulder student Christopher Nie perfectly captured the seasonal change that happened in Boulder in just a matter of hours in a set of photos:

And in less than 4 hours, winter is here in @bouldercolorado. Taken from the EC at @CUBoulder pic.twitter.com/42li2U5pjF

Bob Henson, a science writer with the National Center for Atmospheric Research in Boulder, said of the sudden seasonal switch, “It was quite a shock indeed!  We're used to large temperature swings here, but even by Colorado standards this was a remarkably sharp cold front.”

As the Arctic air plowed its way southward, it also made for some sharp temperature contrasts on weather maps. Take this map of Iowa, where on one side of the front it was a balmy 72°F, while on the other side, and only around 300 miles away, it was 27°F.

The extent of the cold was clearly illustrated by the National Oceanic and Atmospheric Administration’s High Resolution Rapid Refresh model. An image from the model showing the expected minimum temperature from Nov. 13 through midnight on Nov. 14 is appropriately a frosty looking blue for most of the country, with the exceptions of the Southwest and Florida. 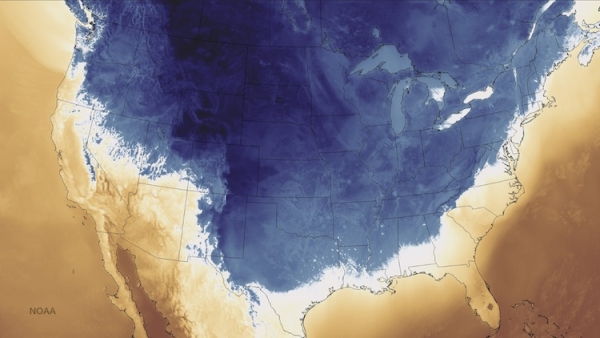 On the morning of Nov. 13, meteorologist James Spann tweeted another chilly image, showing that temperatures got so cold in the heart of the outbreak in the Northern Plains that the computer model map ran out of colors to portray it. Ouch.

Coldest spot in the U.S. this morning was Lucerne, Wyoming with -34F pic.twitter.com/47OXreEpDr

A 48-hour loop showing the advance of the November Cold Wave. http://t.co/HU5Nn7xatz

Of course, if it’s cold somewhere, it’s probably warm somewhere else. Part of the reason for the enormous Arctic outbreak over the U.S. was a high pressure ridge that built up over Alaska — that meant that while most of the country was shivering, Alaska was baking.

This map showing temperature departures from the average for this time of year illustrates that the warm temperatures in Alaska were as anomalously warm as the cold temperatures over the Lower 48:

And one equally strong warm anomaly over the Arctic! @rahmstorf pic.twitter.com/y3ecJOvKCP

It's warmer in parts of #Alaska than it is in north #Florida this morning… #sotheresthat #polarplunge pic.twitter.com/B8qOqCjazu

When It Snows in Michigan, It Snows

For much of the country, the cold was just that, but in a few places, snow accompanied. For example, northern Wisconsin and Michigan’s Upper Peninsula were buried in the stuff:

In Gile, Wis., more than 48 inches had fallen between Monday and Thursday. That’s a lot of shoveling . . .

Stay warm out there everyone!