The end of April has arrived, and with it, the record for the first month in human history with an average carbon dioxide level in Earth’s atmosphere above 400 parts per million has been set. 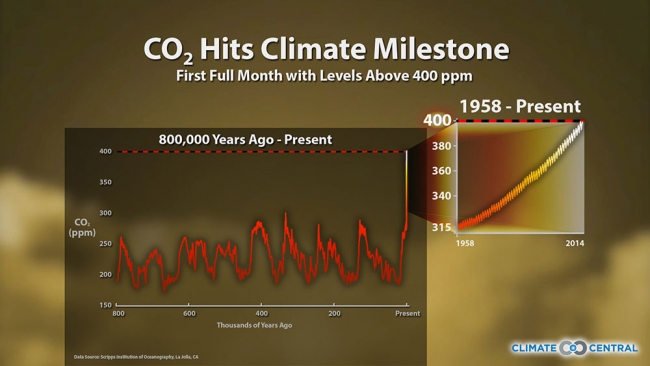 With a little more than 24 hours left in the month, the average for April can't slip below 400 ppm. “Every day in April has been over 400 ppm,” said Pieter Tans, a climate scientist with the National Oceanic and Atmospheric Administration.

The levels of carbon dioxide in the atmosphere are monitored from a site atop Hawaii’s Mauna Loa volcano, where they have been measured continuously since 1958. The long record has charted the steep rise of the greenhouse gas — the most prevalent in Earth’s atmosphere — as a result of human emissions.

The first measurement in excess of 400 ppm was made on May 9, 2013. This year, the level rose above that mark a full two months earlier, and has remained above 400 ppm steadily since the beginning of April. While the milestone is largely a symbolic one, it does illustrate how far emissions have risen from their preindustrial levels of 280 ppm. 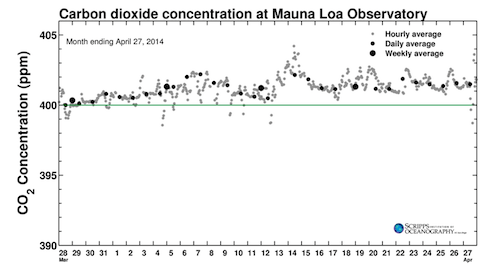 The last time atmospheric carbon dioxide levels were this high consistently was anywhere from 800,000 to 15 million years ago, various studies have estimated, and the world was a very different places then, with much warmer temperatures and extremely higher seas.

Each year, the atmosphere goes through a cycle of carbon dioxide levels, following the bloom and decay of plants with the seasons. Levels rise in winter and into spring, reaching their peak in May when plants have fully awoken from their winter hibernation and pull the CO2 from the atmosphere to help fuel their photosynthesis. After that, levels decline gradually through the summer and plants suck up the CO2.

But the biosphere only pulls out a certain amount of carbon dioxide during the growing season, leaving an ever growing excess of about 2 ppm a year behind. This is why CO2 levels reached the 400 ppm mark earlier this year, and why they were able to build up to stay above that level for the entire month. 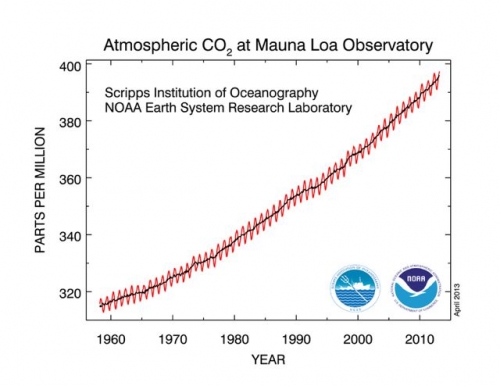 The Keeling Curve, showing CO2 concentrations increasing to near 400 ppm in 2013.
Credit: NOAA

“It's a bit like waves on a rising tide. As a long as we keep burning fossil fuels at current rates, the concentrations will keep rising like this,” Ralph Keeling, the scientists in charge of the Mauna Loa monitoring project, told Climate Central earlier this month. Keeling’s father, Charles Keeling, began the monitoring effort; the graph showing the rise in CO2 is known as the Keeling Curve, after him.

On reaching the April milestone, Ralph Keeling said, he remembers “when the concentrations were below 350 ppm” and that “it still feels a bit surreal now to be reporting concentrations over 400 ppm. Even though it was pretty much inevitable that we would get to this point, it still takes some getting used to.”

CO2 concentrations will almost assuredly stay above 400 ppm through May and possibly June, dipping down below this level again in July, say scientists like Tans who monitor the measurements.

Tans expects the level to peak at around 402.5 ppm in May, before declining.

After another year or so of buildup, CO2 levels could still be above 400 ppm in the fall and will eventually stay above that line for the entire year, Tans said.

You May Also Like
Despite Spate of Tornadoes, 2014 on Track for Low Total
Astronauts Capture Arctic Sea Ice Melt Season in Progress
The Explosive Growth of California’s Drought in 1 Chart
Fracking Company Considers Revealing Secret Chemicals