The world’s greatest reservoir of ice is verging on a breakdown that could push seas to heights not experienced since prehistoric times, drowning dense coastal neighborhoods during the decades ahead, new computer models have shown.

A pair of researchers developed the models to help them understand high sea levels during previous eras of warmer temperatures. Then they ran simulations using those models and found that rising levels of greenhouse gases could trigger runaway Antarctic melting that alone could push sea levels up by more than three feet by century’s end.

The same models showed that Antarctica’s ice sheet would remain largely intact if the most ambitious goals of last year’s Paris agreement on climate change are achieved. 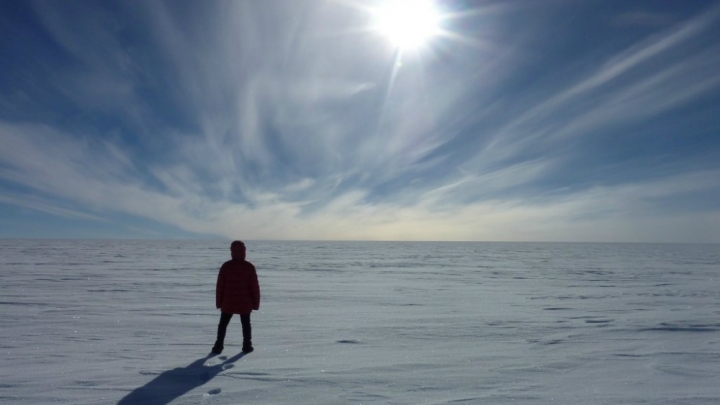 The new findings were published Wednesday in the journal Nature, helping to fill yawning gaps in earlier projections of sea level rise.

The models were produced by a collaboration between two scientists that began in the 1990s. In those models, rising air temperatures in Antarctica caused meltwater to seep into cracks in floating shelves of ice, disintegrating them and exposing sheer cliffs that collapsed under their own weight into the Southern Ocean.

Similar effects of warming are already being observed in Greenland and in some parts of Antarctica, as greenhouse gas pollution from fossil fuels, farming and deforestation warms the air. Last year was the hottest on record, easily surpassing a record set one year earlier. The ice sheets are also being melted from beneath by warming ocean temperatures.

“Sea level has risen a lot — 10 to 20 meters — in warm periods in the past, and our ice sheet models couldn’t make the Antarctic ice sheet retreat enough to explain that,” said David Pollard, a Penn State climate scientist who produced Wednesday’s study with UMass professor Robert DeConto.

“We were looking for new mechanisms that could make the ice more vulnerable to climate warming to explain past sea level rise,” Pollard said.

The breakdown that they discovered was not triggered when warming in the models was limited to levels similar to those called for under the Paris Agreement — something that Pollard described as potentially “good news.” That agreement aims to keep warming to well below 2°C (3.6°F) compared with preindustrial times. Since then, temperatures have already warmed 1°C.

“You need to have a lot of melt to do this,” Pollard said.

Although the Paris Agreement contained highly ambitious goals, individual countries have not come close to committing to action plans that would ensure that the goals are actually realized.

If pollution continues to be released without being reined in, the modeling showed that high Antarctic air temperatures could lead to melting that would push up sea levels by dozens of feet during the centuries ahead. Warmer ocean waters would prevent a recovery for thousands of years after that, the scientists found.

Ongoing work is planned to refine the projections, which remain imprecise, but are nonetheless being hailed by climate scientists as an important step forward in understanding the planet’s future.

“It’s an important paper,” said Luke Trusel, a Woods Hole Oceanographic Institution scientist who was not involved in producing it, and who has recently published high-profile research on Antarctica and climate change.

“It really starts to look at some of the more underappreciated aspects of climate change across Antarctica,” Trusel said. “They’re starting to look at how sensitive ice shelves are to climate change.”

Assessments by the United Nations and others have previously assumed the effects on Antarctica’s ice sheet would be negligible as temperatures rise. The new study is the latest in a growing list of peer-reviewed papers that rejects that optimistic scenario as unrealistic.

In major East Coast cities, where land is sinking at the same time that seas are rising, an independent analysis by Climate Central shows that the rapid Antarctic melting described by the new modeling effort would push tide levels up by between five and six feet this century alone.

Climate Central’s analysis combined mid-range values from the new projections for Antarctic melting with previous mid-range projections regarding global sea level rise, along with local factors such as sinking that naturally occurs in some areas. It illuminated the dangerous collective impacts of the different ways that climate change is expected to affect sea levels.

If climate pollution is quickly and dramatically reined in, the analysis shows sea level rise in major East Coast cities, including New York, Boston and Baltimore, could be kept to less than two feet — which could nonetheless see developed stretches of shorelines regularly or permanently flooded.

Problems associated with sea level rise are expected to be worse in Louisiana, where stretches of land are being lost to erosion caused by flood control projects and gas and oil exploration. New Orleans could see more than seven feet of sea level rise by 2100, Climate Central’s analysis of the new findings showed.

The new paper by Pollard and DeConto was received positively by sea level rise scientists. That contrasts with overwhelmingly skeptical responses to a recent apocalyptic scenario that was finalized and published last week by a team of researchers led by well-known scientist-turned-activist James Hansen.

John Church, an Australian government scientist who specializes in sea level rise projections, cautioned that the experiments used to produce Wednesday’s paper were based on too few models to give him total confidence in the findings. But he said his “overall reaction” to the paper was “positive.”

“Yes, the projections are larger than previous estimates,” Church said. “But not in the unrealistic range like Hansen et al.”

The recent Hansen paper was a “worse-case scenario,” said NASA scientist Eric Rignot, one of its coauthors.

“I think it is setting up a new paradigm for sea level projections, because their numbers are much higher than those from traditional ice sheet models with incomplete or simplified physics,” Rignot said. “Once the ice shelves are gone, melted away, calving of big walls will be the dominant process of mass wastage. It is a great paper.”

To create the maps in this story, Climate Central adjusted existing local sea level rise projections to account for DeConto and Pollard's new findings​,​ rounded​ results​ to the nearest foot​, and took matching screenshots from our Surging Seas Risk Zone Map. We used local median sea level projections from Kopp et al. 2014 and replaced the Antarctic component with the average ​of the central projections​ from the two main scenarios in the new paper.