Since the days of the great early 20th century polar explorers, scientists have noticed the unbelievably bright blue ponds and streams of meltwater that can form on the glaciers and ice shelves of Antarctica and were even crucial to the recent collapse of one ice shelf.

While most research into Antarctic ice melt has concentrated on the impacts of warming ocean waters that are eating away at the ice from below, a new continent-wide survey shows that these surface meltwater drainage systems are much more prevalent around the continent than was previously thought.

The systems, described in two new studies published Wednesday in the journal Nature, vary from a collection of ponds to a roaring seasonal river that dumps meltwater into the ocean via a 400-foot-wide waterfall. The ubiquity and variety of these meltwater systems may means they are more important to the future stability of Antarctica’s ice shelves than scientists had realized, the researchers behind the survey say.

“It shows that we’re just starting to understand” the complexities of such systems and that we need “more sophisticated views of the plumbing on our planet,” study co-author Robin Bell, a polar researcher at Columbia University’s Lamont-Doherty Earth Observatory, said.

The continent’s vast ice sheets contain enough ice to raise global sea levels by nearly 200 feet were it all to melt, though even partial melt could cause vulnerable coastal areas that are home to millions to be gradually claimed by the sea.

Most of the work to understand the melt of Antarctica’s ice shelves and glaciers has concentrated on the effects of warm ocean waters lapping away at them from below, not the surface meltwater produced by warming air temperatures.

Ponds and streams of meltwater had been documented on Antarctica as far back as the famed expeditions led by Ernest Shackleton and Robert Falcon Scott in 1909 and 1912, respectively. Though meltwater is thought to have been a major contributing factor in the collapse of the Larsen B ice shelf in 2002, most research into such surface melt features were concentrated in Greenland, where they seemed to be more important to understanding warming-driven melt.

No comprehensive view of Antarctica’s surface melt features existed. Bell and Jonathan Kingslake, also at Lamont-Doherty, along with several colleagues, pored over satellite images dating back to 1973 and aerial photos going back to 1947 to do just that.

“Quickly we started to realize that they’re much more widespread than people thought,” Kingslake said. 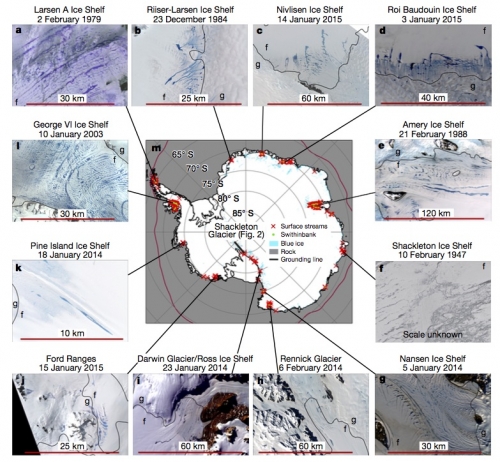 They found nearly 700 drainage systems that formed during the summer melt season, some of which were found farther inland and at higher altitudes than the researchers expected. These systems had been around for decades and while some were stationary ponds, others were made up of streams that transported water as far as 75 miles and fed melt ponds, the largest of which, on the Amery Ice Shelf, reached 50 miles long.

Most of the melt ponds and streams form near rock outcrops or bluish ice exposed by the sharp winds that scour snow from the surface; these features are darker than the surrounding ice and so absorb more solar energy.

In one paper, the team took a closer look at the system they found on the Nansen Ice Shelf, which was first observed during the Shackleton and Scott expeditions. The Scott team noted that the “noise of running water from a lot of streams sounded odd after the usual Antarctic silence,” and fell into several of the ponds and streams.

The new research shows that during warm years with considerable melt, a river system forms that eventually ends in a 400-foot-wide waterfall that can siphon off an entire year’s worth of surface melt in just a week.

The different types of meltwater drainage systems could raise different possibilities for ice sheet stability. A constellation of melt ponds helped to destabilize the Larsen B ice shelf by absorbing more solar energy and seeping into crevasses in the ice and causing it to further fracture. But an efficient river system like that found on Nansen could actually protect the ice shelf, Bell and her colleagues posit. By quickly exporting meltwater from the ice sheet, the river could prevent that energy absorption and infiltration of cracks.

But the meltwater streams could also help transport meltwater to more vulnerable parts of the ice.

“We have these two different scenarios and we don’t know which one is more likely,” Kingslake said, though that will likely vary from ice shelf to ice shelf. “So we really can’t tell what the future holds for any one particular ice shelf.”

A relatively flat ice shelf (a) is likely to have numerous melt ponds and streams, which could destabilize the shelf by infiltrating crevasses and causing more fracture, while an ice shelf with a steeper slope (b) may have more of a large river network that could export meltwater off the ice shelf.
Click image to enlarge. Credit: Nature

Kingslake and Bell plan to dive deeper into the data to start understanding why ice shelves exhibit different drainage systems and to find out where the meltwater is going, as some could seep into surface snow instead of staying at the surface. A better understanding of how, when and where the meltwater forms could help scientists better model how different ice shelves will respond to rising temperatures, which are expected to increase surface melt.

“It is important to find out how many other ice shelves have a large scale river network, which transports meltwater efficiently into the ocean, as currently, we are only aware of the river and waterfall system on the Nansen ice shelf,” Alison Banwell, a glaciologist at the Scott Polar Research Institute at the University of Cambridge, said in an email. Banwell, who wrote a Nature commentary on the two papers, was not involved with the research.

“Looking at the presence of melt water and its fate is critical,” Eric Rignot, a NASA and University of California, Irvine, glaciologist who also wasn’t involved in the work, said in an email, as “models assuming that all surface meltwater will pond and crack the ice are overly simplistic.” He said it was “a stretch,” though to say that surface rivers like that on the Nansen shelf would protect the ice.

Regardless of what they find, Bell and Kingslake are excited to delve further into the meltwater systems, which Bell says show that “there’s still so much beauty to be discovered on our planet.”

You May Also Like:
Harvard Scientists Taking Geoengineering Into the Field
Scientists: Get Used to Wildfires in a Warming World
Warming-Driven Glacier Melt Leads to ‘River Piracy’
New Posters Imagine National Parks in 2050; It’s Not Pretty